Mnangagwa’s dialogue will not work, simple!

Source: Mnangagwa’s dialogue will not work, simple! – NewsDay Zimbabwe May 23, 2019 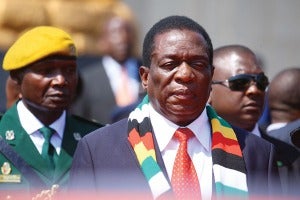 LET me start with the conclusion: The political parties dialogue that President Emmerson Mnangagwa launched last Friday is a political theatre and pageantry that will not yield anything, and the best thing is to can it almost as immediately as it was launched.

I almost said the dialogue will fail, but something that fails is something that has set objectives and prospects for success, but this is an elaborate charade that can honestly achieve nothing.
Let me step back and explain how I reached at such a conclusion.

The latest round of Zimbabwean problems follow an election that the MDC Alliance claim they won, but which the Zimbabwe Electoral Commission (ZEC) says was won by Zanu PF.

Mnangagwa won the vote with a figure ranging from between 50,6% to 50,8%, while his rival Nelson Chamisa of MDC Alliance got 44%.

Chamisa insists that Zimbabwe faces a legitimacy crisis, while international observer missions also questioned some aspects of the vote tallying.

On that score alone, the dispute that Zimbabwe faces, the impasse that is ostensibly holding the country back, is the stalemate between Mnangagwa and Chamisa and nobody else.

Mnangagwa understands that this stalemate is holding Zimbabwe back and there is need for dialogue, but instead of addressing this, he has gone for an elaborate box-ticking exercise, as if to demonstrate to outsiders that he is doing all in his power to fix Zimbabwe.

This is the most extravagant form of keeping up appearances, and I daresay it is not genuine and thus will not move the country forward.

Presidential candidates like NCA’s Lovemore Madhuku or Bryn Mteki did not dispute Mnangagwa’s victory and the votes they got are so insignificant that even if the dialogue with Mnangagwa succeeds, it will not improve Zimbabwe’s economy nor prospects.

Besides the stalemate, the reality is that most Zimbabweans in urban areas have little or no faith in Mnangagwa and even less faith in Madhuku, Mteki or Thokozani Khupe of the MDC-T.

The presidential candidates that Mnangagwa is consorting with got a combined 2,7% of the vote, which in all honesty is not enough to force a dialogue that could drag us out of the economic quagmire.

To end this stalemate, therefore, there is need to end posturing and engage in proper and meaningful dialogue.

This first step to begin real dialogue is to end this facade that is now known as the Political Actors Dialogue (POLAD), it is pointless and nothing more than an ego-stroking exercise.

Secondly, if it takes moving mountains to bring Chamisa to the dialogue table, then Mnangagwa has to summon all his strength and do it.

Both Mnangagwa and Chamisa have indicated their willingness to talk, so I do not see the problem here. Both are amenable to dialogue, so what is holding them back?

No matter how fraught with difficulties that dialogue may be, it could change the country’s fortunes and so it has to be pursued at all costs.

We saw it in 2008, where former South African President Thabo Mbeki brought sworn enemies, Robert Mugabe and Morgan Tsvangirai to the table.

Even as they were holding talks, Mugabe hurled insults at Tsvangirai and the latter responded in kind.

There were times when there were serious impasses, allegations that State security organs were spying on the mediator, charges of the involvement of Americans and that there were moles in all camps.

But guess what, Tsvangirai, Mugabe and MDC leader Arthur Mutambara signed on the dotted line that brought some form of prosperity to the country and an improvement in the lives of Zimbabweans.

Please, do not confuse this as agitation for a government of national unity.

Kenya provides an example of how a government and a disillusioned opposition can come together for the good of a country.

I believe that any form of dialogue between Mnangagwa and Chamisa has the potential to uplift the national mood more than the pseudo-dialogue that was launched last Friday.

Dialogue is about compromise; it is about giving and taking and in the end bringing out the best possible deal.

What possibly can Khupe, Mteki, Madhuku and others on one hand demand and give to Mnangagwa on the other.

Instead, they are grateful to be on the so-called negotiating table and in their gratitude I do not expect them to be making any meaningful demands.

If, for example, Madhuku makes a strong demand and Mnangagwa tells him that he represents barely anyone except about 0.1% of the voting population, which is negligible in the bigger scheme of things, how will the NCA leader respond?

The current dialogue is not a meeting of equals. Rather, one group is absolutely emaciated and the real power is in the hands of one person.

At best, we can describe this as an echochamber, where Mnangagwa is happy to meet with people who will only be happy to parrot what he says, or at worst, a monologue, where there is no one with enough
standing to oppose the President.

Putting an end to this POLAD would not be such a bad idea, after all.