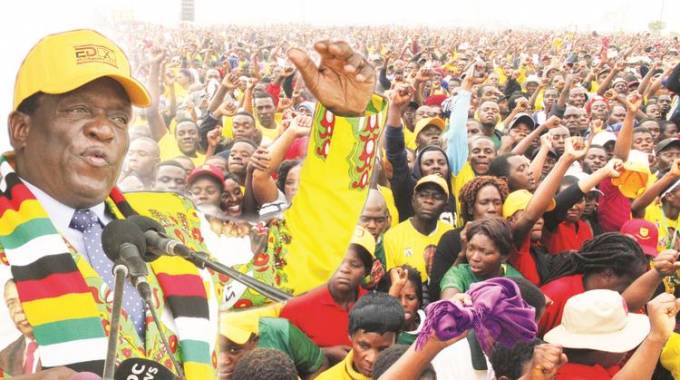 Government has opened floodgates of economic opportunities to empower youths in all sectors as President Mnangagwa’s administration intensifies efforts to reconstruct the economy towards a middle-income country by 2030. If fully seized upon, the opportunities can significantly reduce the rate of unemployment among youths.

President Mnangagwa told a youth convention organised by the Zanu-PF Youth League here that young people should grab these opportunities with both hands to transform their lives.

He said young people were the future leaders and it was incumbent upon the Government of the day to lay the foundation for their lives. President Mnangagwa said Government now prioritised business and economics.

He said in the past five months, his administration secured US$16 billion in investment commitments some of which were already being implemented. “The youths are the future,” said President Mnangagwa.

“If you are the future, you must be empowered now for you to be good leaders tomorrow because you have been empowered at the correct age. You should not remain poverty stricken when you are young because when you come our age you will not value the young who come after you. But if we empower you, you shall have the same benevolence to empower the youths who will come after you,” the President said.

“You have talked about the Empowerment Bank. We have given it US$12 million from the Reserve Bank of Zimbabwe so that you can access funds for whatever project you want to do,” he said.

“It is important that as young people you do projects as groups and start small. We have put aside funds to support you. If you are focused in no time you become middle companies. These are the things that you must take advantage of because we have put aside funds for such purposes,” he said.

“In mining sector, we have said there are funds but the minister thinks that you must congregate as groups so that we can give you machinery.” President Mnangagwa also urged youths to venture into agriculture.

“Come forward as groups and be supported. Those who want to do poultry, goats, or sheep, all these things are wanted in the Middle East. The point is as long as you have a piece of land come forward, there are funds for that. If you want to do fish (project) Mai (Oppah) Muchinguri-Kashiri will give you free fish and you create your own ponds. In six months or less they will have grown and you start to sell and all those projects are suitable for young people who are willing to do business on their own,” he said.

He said his administration was a listening Government that focused on addressing the concerns of the people. “Under the new dispensation, we have brought back the party to move forward following the correct line of the revolution.