NRZ pushing miners out of business THE National Railways of Zimbabwe (NRZ) is levying close to US$0,10 to move a tonne of freight per kilometre, nearly 300% more than other competing rail operators in the region, a key coal-mining company has said. 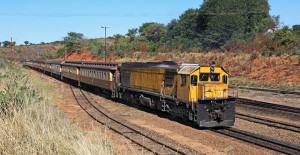 However, the steep cost of transporting freight by rail through the NRZ has triggered a sharp rise in production costs, prompting key coal producers to scout for cheaper transport solutions.

The NRZ, which recently acquired a sizeable fleet of wagons and locomotives through a US$400 million recapitalisation deal between government, Diaspora Infrastructure Development Group and Transnet Engineering of South Africa, had pivoted its recovery plan on increasing coal output and the entry of new mining players.

The state enterprise, which enjoys a railway monopoly, is currently charging US$0,7 to move a tonne of cargo, compared to the regional average charge of US$0,3.

Makomo Resources general manager Raymond Mutokonyi told businessdigest this week that the miner was contemplating transporting its coal shipments by road, which is now cheaper.

“The NRZ rates are completely unsustainable, making goods movement very expensive. It costs about US$54,80 per tonne (to transport cargo) from Hwange to Harare which converts to almost US$0,7 per kilometre,” he said.
“Naturally, business has moved to road as there are no additional offloading costs and local transport charges should one use the NRZ sidings, making it very expensive.”

Sources say if the NRZ maintains its existing charge regime, the recently acquired locomotives and wagons could become less used, while the entity’s revival plan will go off the rails. Mutokonyi said the steep charges levied by the NRZ were threatening the viability of the rail and coal sectors, while engagement was required with key industry stakeholders.

“NRZ has to be engaged to offer competitive rates to revive the industry,” he said.

Sources within the rail industry said Russian mining firm Liberation Mining, which was granted an operating licence this year to extract coal in the country, was already engaging Transnet of South Africa to ferry its coal consignments to key markets owing to high NRZ charges.

A source said Liberation Mining had “offered to refurbish the NRZ’s redundant locomotives” in exchange for “affordable rail charges.”

“As a big mining company, we can help in reshaping NRZ. But we know how much it costs to move coal and if NRZ can agree with us, we can work with them to refurbish their stations,” company managing director Victor Tskhovrebov was reported as saying last year.