Only Zimbabwe citizens themselves have the power to change their lives

Since 1990 – when I was in Lower Six – have been writing article after article – as if singing from the top of mountains – trying to advise the Zimbabwean government and showing them where they were going wrong, so as to improve.

Source: Only Zimbabwe citizens themselves have the power to change their lives – The Zimbabwean 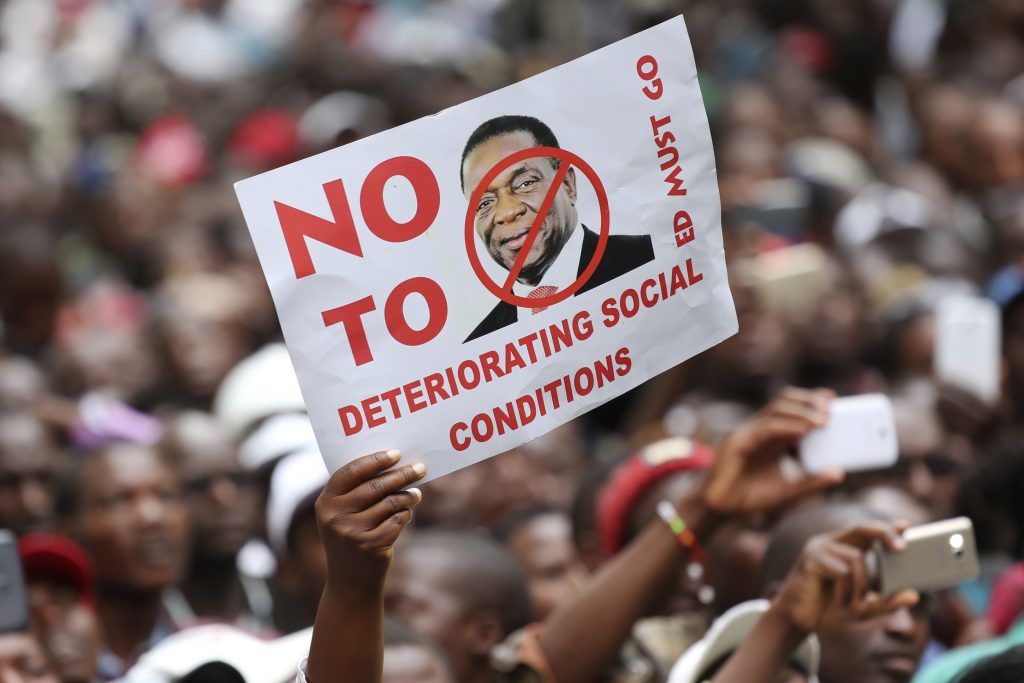 A protestor holds a placard with a photograph of Zimbabwean President Emmerson Mnangagwa during a demonstration in Harare, Thursday, Nov., 29, 2018. Zimbabweans are gathering for a nationwide protest over the country’s economic collapse and what the opposition calls the new government’s “cocktail of lies.” (AP Photo/Tsvangirayi Mukwazhi)

But, of course to no avail. Ever since the days of the late deposed president Robert Gabriel Mugabe, to the current era of his predecessor Emmerson Dambudzo Mnangagwa, nothing has changed in the governance of the country, as it continues in its downward spiral into further economic, political and social decay – despite all concerted efforts by numerous people to highlight these shortcomings.

What did we do wrong? Why were our voices never listened to?

After nearly 30 years of passionately trying naively to change the status quo, my eyes have since opened to the fact that I was wasting my time! Barking up the wrong tree…some would say.

These guys in government know exactly what they are doing – and doing wrong. That is their modus operandi. They have no intention of changing, and will never change.

In fact, a friend of mine always castigated me for wasting my time blaming the government for this and that, saying: “The government is only doing what a government does”. He always reminded me that these guys were in power for power’s sake, especially through oppression. They are in power for wealth, especially through corruption. Multilateral institutions like the IMF, World Bank, and multinational corporations etc would even look aside, as they also stand to benefit from corrupt business dealings with these leaders.

Only after their interests were threatened, through the year 2000s land invasions, did they stand up against Mugabe – nothing to do with democracy and human rights, but land and business interests. Actually, Mugabe knew this very well – that is why he always made it a point of informing his audience of this fact, as he was fully aware that the targeted sanctions against him and his cronies had absolutely nothing to with their human rights abuses and electoral fraud.

As we go back into history, it is clear to all that Mugabe committed far worse human rights abuses in the dawn of his rule, through the Gukurahundi genocidal atrocities – which saw the massacring of over 20,000 innocent men, women and children in the Matebeleland and Midlands province – but, not once did the so-called beacons of democracy in the West ever raise a single word of rebuke. In fact, Mugabe received several accolades for ‘good governance’ and even dined with the Queen of England.

Why? Because Western interests were secure in Mugabe’s hands, whilst he butchered his fellow countrymen and women.

That is why his predecessor Mnangagwa is now busy calling for the lifting of sanctions, even in the midst of increased human rights abuses, as he has assured Western countries that expelled white farmers will be generously compensated.

That’s why it would be foolhardy for the opposition, or anyone else in Zimbabwe, to expect serious action to be taken against the government by these multilateral institutions, including the United Nations. Just as serious action will never be taken against a country like Saudi Arabia – in spite of numerous adverse reports by Special Rappartoires, including gross human rights abuses, the brazen of the killing of Yemeni people, and the murder of journalist Jamal Khashoggi – as long the United States and British interests are not threatened.

Just wait for that day when the Saudis decide to buy all their military equipment from Russia, then tables will be turned. Suddenly, the kingdom will be categorized as state sponsors of terrorism by the West.

Similarly, it would be very misplaced for us to expect much to come out of the recent visit by the UN Special Rappartoire to Zimbabwe. No matter what he will present to the Human Rights Council, it will amount to just wasted paper, as long as the government guarantees Western countries’ business interests. Is it then any wonder that during the recent visit to New York for the UN General Assembly, several US business delegations were promised land if they invested in Zimbabwe’s health sector? This was merely the government ensuring its safeguards.

Therefore, it is pointless for us to always be blaming the government for doing what is ‘normal’ to them. Their position is very secure. And Zimbabweans need to finally wake up and realize that what is needed now is mobilizing citizen power to ‘force through’, by democratic and constitutional means, the change they want.

A quick look at the histories of those countries we regard as beacons of democracy, such as Britain, France and the US, shows that this was delivered after mass citizen power. This change from abusive, autocratic and kleptomaniac monarchies to human rights-respecting, and people-centred democracies was only achieved at the hands of the people themselves.

The king or queen did not just wake up one day and announced that he or she had read the newspapers, and had finally seen the errors of his or her ways, and had decided to change!

They never relied on the opposition, as these have proven to be no better than the government they replaced, despite speaking glowingly about democracy, freedom and prosperity, whilst they were still in the opposition.

Which is a clear testimony to the fact that all governments are the same, and without a strong citizen movement, they will naturally turn to looting, oppression, and even killing? One does not need an over-active imagination to visualize what type of a leader someone like US President Donald J. Trump could have easily become had there not been a strong and fearless citizen movement in that country.

Furthermore, citizen power does not necessarily equate to ‘regime change’, but simply ensures that those in authority are held to account, and ensure that the electorates’ desires are met.

This is exactly what the people of Zimbabwe need. Not a plethora of opposition political parties – who will simply morph into the former government, once they gain power – but, a strong citizen movement.

Let us be clear that a citizen movement is not an organisation with structures and leadership. No, far from it. We as people know what we want. All we need to do is speak loudly, and stand boldly for ourselves.

Citizen power starts at the grassroots level. How many of us, in the face of incessant water problems, have actually gone to lodge our displeasure with our local councillor, or the town clerk, or mayor? Or, we have merely complained in our homes, or in kombis?

How many of us even know where our member of parliament resides, or where his/her offices are located, so that we can go there to voice issues that affect the constituency?

How can we dream of demanding parliament enact, amend or repeal certain laws, when none of us attends local town council meetings, or budget consultation meetings, so as to voice our concerns or demand financial reports?

Before we even think of grander issues affecting our nation, we need to start with our own local communities. Without that, we can forget about taking sterner action to change the country.

How can we demand the Executive take more concrete action against corrupt elements, yet we hardly stand up against our own local authorities’ corruption?

As long as we leave such issues in the hands of our politicians or the opposition, then we are not serious about real change.

In fact, the government loves it when we spend all our time criticizing it, instead of focussing on the solution – which is, mobilizing citizen power. When we waste time merely pointing out what the government is doing wrong – instead of the solution – this gives those in power the reassurance that we will not do anything, and they can comfortably continue in their prodigal, corrupt and oppressive ways.

Expecting the government to change on its own accord is merely daydreaming. And expecting the opposition to be any different is foolhardy. Only WE can demand and force through the change WE want through powerful and fearless citizen power. Without that, we are doomed to a life of poverty, oppression and servitude.