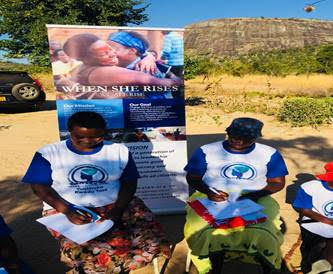 We are writing to you on behalf of the 52% of women in Zimbabwe whose interests are underrepresented in a male dominated Parliament and Local Government.

These sections collectively envisage a Zimbabwe leadership structure where men and women are equally represented at all levels.

In other words, it aspires for a political and legal order where men and women enjoy equal access to leadership opportunities.

It is disturbing to note that since the passage of the Constitution in 2013, women representation in directly elected positions in Parliament and Local Government structures remains low and in retreat all together.

At the top Presidium level within the country, we currently do not have a woman President nor Vice President.

This precarious situation is reflective of a cross cutting political and patriarchal culture which generally sidelines women from leadership.

The sidelining of women results in policy and legislative frameworks which fail to improve the status of women in the country and causes greater poverty and alienation of women from development initiatives.

We therefore ask your offices to address this serious challenge which puts our constitutional democracy on trial. It poses the critical question that: How can a country develop when a majority of its people are disenfranchised from leadership?

As the Women’s Academy for Leadership and Political Excellence (WALPE), drawing our mandate from Section 7(c) of the Constitution, make the following recommendations to Political Parties:

i)Political parties prioritize women as candidates in all by-elections that may arise in Parliament and Local authorities across the country in between now and the 2023 national elections.

ii)Replace all vacant positions left by female MPs or Councillors during by-elections with fellow women leaders. An example is the upcoming by-election in Glen View South Constituency that fell vacant after the death of Hon Vimbai Tsvangirai Java. If Hon Java is replaced by a male MP it means the number of women directly elected in Parliament will fall from 26 to 25.

iii)Create a conducive environment free of violence and intimidation that allows women to freely campaign.

iv)Criminalize vote buying during elections as this disadvantages aspiring female leaders most of whom have limited economic resources to spend on campaigning.

v)Incorporate the 50/50 gender representation in political party constitutions. Those that already have must fully operationalize their gender parity clauses in order to guarantee equal representation in all leadership positions.

vi)Political parties with MPs in Parliament must move motions to fully align the Electoral Act with the Constitution in fulfillment of section 17, 56 and 80. This will help the Zimbabwe Electoral Commission (ZEC) in enforcing 50/50 gender representation on all political party lists during elections.

These provisions will ensure that political parties and the arms of Government at every level offer equal opportunities for men and women. It is our sincere hope that as leaders in your parties you will heed our call and begin processes that show real commitment towards empowerment of women because if She Rises We all Rise.

For and on behalf of the Aspiring Women Leaders of Zimbabwe.