Source: Orphan elephants in Zimbabwe one step closer to release in protected wilderness 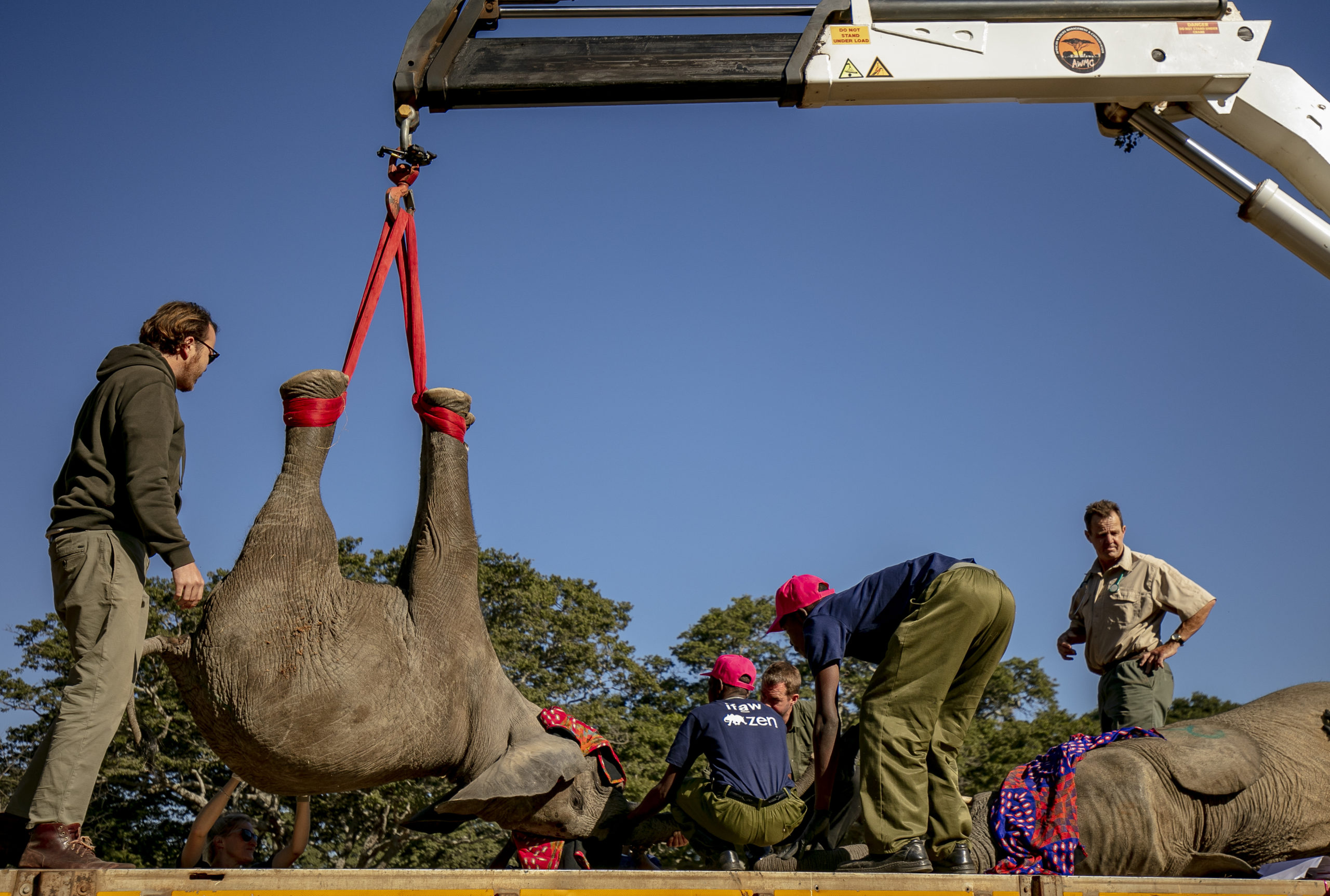 Sedated elephants are loaded on a flatbed to be moved to the transport truck. On March 16–17, 2021, Wild is Life and the International Fund for Animal Welfare translocated six orphaned elephant calves 900 kilometers from the Zimbabwe Elephant Nursery in Harare to a soft release facility near Victoria Falls, Zimbabwe. Photo: Lesanne Dunlop/ © IFAW

“These calves will now start the second phase of their lives—learning to be sufficiently independent to eventually live as wild elephants,” said Roxy Danckwerts, CEO and Founder of Wild is Life (WIL).

After arriving in the dark and being offloaded into an enclosure at the IFAW-Zimbabwe Elephant Nursery (ZEN) Project ‘soft release’ facility at Panda Masuie Forest Reserve, the calves were introduced at sunrise to the resident rescue herd of nine elephants.

“It was incredible to see the older elephants thunder down the hill trumpeting and screaming with excitement to meet the new calves. The meet and greet went fantastically. They were caressing each other with their trunks, and even rubbing faces with each other—it was very special to be able to witness their interactions,” said Danckwerts.

“In the next few days, they will join the resident rescue herd to go on supervised daily bush walks, interacting with the wild elephants that roam here and finally departing to either form their own herd or to join a wild herd. This is everything we have worked so hard to achieve. It’s an emotional moment, but also an immensely proud one.”

Aged between 3-5 years old, each calf was rescued by WIL and the International Fund for Animal Welfare (IFAW), and has spent up to three years receiving round-the-clock care from staff at the IFAW-ZEN Project rehabilitation center outside Harare. One of the calves was fitted with a tracking collar allowing their movements at Panda Masuie to be monitored.

“Moving these young elephants to a soft release facility in the Panda Masuie Forest Reserve, near Victoria Falls, is an incredible achievement,” said Neil Greenwood, Regional Director IFAW Southern Africa. “Each was rescued as an orphan from life-threatening danger and would surely have died without thousands of hours of dedicated rehabilitation and intense nursing by ZEN.”

“It is truly an honor to celebrate these orphaned elephant calves on their way to life back in the wild. These calves offer hope to the recovery of the species, and our work in Panda Masuie ensures the protection of their future. The incredible Panda Masuie landscape is a vital corridor of protected land to migrating wildlife populations, including Africa’s endangered elephants,” said Jos Danckwerts, Director of the IFAW-ZEN Project.

All the elephants moved (Marsie, Jack, Johnnie, Tessa, Mana and Amira) were rescued in 2018 and 2019 having become stuck in muddy waterholes that had dried out due to severe drought. All lost their mothers to death or abandonment, and Jack (+- 5 yrs.) and Mana (+- 3 yrs.) suffered attack by hyena or lion.

Earlier this year, the International Union for Conservation of Nature (IUCN) identified Africa’s elephants as two unique species, the forest elephant (Loxodonta cyclotis) and the African savanna elephant (Loxodonta africana). The forest elephant is listed as critically endangered and the savanna elephant is listed as endangered. Each of these rescued savannah elephant calves offers hope for the survival of an ever-threatened species.