For Kuda Musasiwa, a marketing consultant, growing tomatoes was supposed to be a pastime, but when he found himself struggling to secure new marketing contracts, the fallback plan became the main plan. Today the venture has gone full scale. Our Business Editor, Kuda Chideme, caught up with Musasiwa to talk about his tomato business and its prospects of growth. 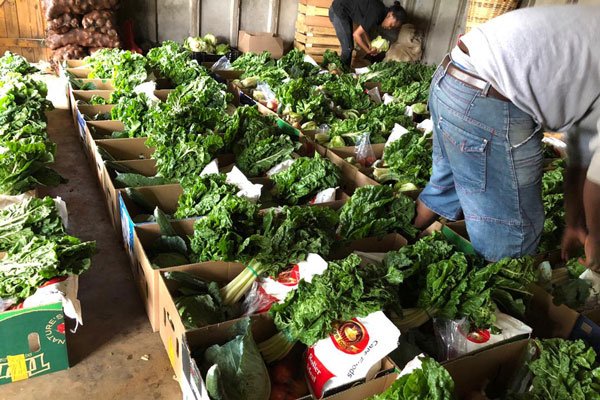 Fresh in a Box packaging before deliveries

KC: How did the idea of Fresh in a Box come up?

KM: I had just finished my tomato project and was hoping the supermarkets would take up my produce, but they were offering me ridiculous prices.

So it was out of desperation that I took to Twitter and asked if there was anyone interested in buying tomatoes. Some guy responded and said he would want more than just tomatoes, but a variety of vegetables. That is when we connected with other farmers who were doing lettuce, broccoli, baby marrow and other horticulture produce and that’s how it all started.

At that time, we were just trying to get rid of our tomatoes, but then after about three or four days of receiving between 50 and 70 orders a day we then realised the potential of the business.

We had not anticipated that much demand. It grew very quickly and we had to quickly scale up. At first it was just me and my brother doing deliveries in our small vehicles, but when you get above 50 orders a day it becomes impossible. So we called hwindi (a local taxi company) and negotiated for them to come on board and they agreed to give us a good rate.

We leveraged on that partnership and the business kept on growing until we had to get another logistics company partner with bigger trucks.

KC: What is your background? Did you have any prior farming experience?

KM: I did not have any farming experience. I knew nothing about tomatoes. It was just something I was hoping would become a learning experience for me because we already had a piece of land. We spent about $5 700 to have the greenhouse set up.

I just wanted to get into a more productive space because I understood that the consulting and marketing jobs would be the first to go when an economy faces problems, so farming was going to be my fallback plan.

KC: How is the business performing?

KM: We are doing quite well. On average we do about 200 boxes a day. In December we reached a peak of 367 boxes when people wanted to get supplies for Christmas.

The tomatoes from my greenhouse were finished by November. It is now a big operation, we actually now have a procurement manager. You can imagine we are doing tonnes of fresh produce every day.

We are leveraging the best of technology to make sure we can scale up really quickly and deliver more produce to more people.

When we started we did not even have a logo, but we are metamorphosing. We are now at a stage where we have stopped just being a vegetable company. We are almost a data company. I don’t think there are many companies that can say they have conquered e-commerce the way we have. We now have vast amounts of data.

We have a website where we registered farmers for our procurement, we have about 3 700 young urban farmers who have registered on the platform.

They have the same problems of finding markets. There are cartels, gatekeepers — you will be lucky if you can get access to the likes of Food Lovers Market, Pick n Pay and if you do, it will be very difficult to get the best price for your produce.

KC: How big is your team?

KM: When my brother and I started this, we did not really have knowledge of the products. For example, we did not know what good or bad broccoli looks like.

We only started hiring people after like two weeks of starting the business.

We had a terrible experience one day when we delivered yellow broccoli to our customers and we received complaints. We had to replace it the next day, which was an extra cost to us and that’s when we decided to recruit because we could not afford such mistakes.

Right now, we have a team of about 15 young people. We recruited most of them via Twitter.

It is a multicultural and multiracial team. It’s a diverse team even in terms of gender we are currently at 50:50.

Most of the guys are doing jobs that they did not train for, but they are highly adaptable. They all have part ownership to ensure that they have an invested interest in the business.

KC: How are you handling your payments given the current currency crisis?

KM: It is very difficult when people are sending vast amounts of mobile money yet most farmers only accept cash.

If you walk up to an Ecocash agent right now you pay the charges to Econet and the agent’s commission, then you have to pay an additional 20% for them to give you cash.

So after the transaction charges and the 2% tax on electronic transactions, we are losing a great deal of money and that is a disaster for business.

A lot of our suppliers who we have been doing repeat business with are starting to trust us and now we can negotiate so that we can pay them via RTGS. We have also introduced a discount of about 70% for customers paying in US dollar which will help us militate against some of the exchange losses.

KC: What was your initial capital outlay?

KM: I cannot say the money to set up the initial greenhouse was a direct investment into the business, but the investment came more from our customers who trusted us enough and gave us money to procure their produce a day before.

So it was a very cheap business to start. We are very privileged. We always go the market with the benefit of our customers having lent us the money in advance unlike the retailer who guesses what customers want, uses his money and then puts a mark-up.

KC: What are the prospects for the business in 2019?

KM: We have started registering orders of about 150 boxes a day, but we would want to get up to 1 000 boxes. We would love to get cold chain trucks to move our produce around and warehouses for storage. Finding products for Bulawayo is always difficult, so with an efficient logistics system we will be able to get fresh produce to the southern part of the country.

We are currently in Harare, Bulawayo and Mutare, so for 2019 we would want to expand our footprint to Zvishavane, Masvingo, Victoria Falls and Gweru.
KC: Do you think government is doing enough to promote innovation?

KM: Government will always try to get in the way of innovation. I will give you an example, we filed our papers to register the company on the 29th, but as I sit here we are still waiting for the company to be officially registered.

It seems the only way to get it done is to pay someone. Initially there wasn’t paper to print the certificates, the name search took three weeks, then the file got lost. It should be a seamless process. In Rwanda you can register a company and open a bank account within 30 minutes on your phone. There are too many hurdles and it is frustrating. It stifles innovation.

Zimbabweans have a whole lot of ideas, but it is time that our state catches up to this new way of doing business