PHOTOS: A life of anonymity – Migrants die, unnamed and unclaimed, in South Africa

Ever since Francis Nkomo went missing 10 years ago, his older sister Banele has been waiting for a sign of life. “I miss him,” says Banele while holding his picture, all she has left of her brother. “I miss him a lot.”

Francis, a Zimbabwean migrant living in Johannesburg, was 29 when he disappeared, one of thousands who have gone missing in South Africa.

Millions of migrants slip in through the country’s porous borders without documentation and fall between the cracks in the system. They live a life of anonymity. And when they die, they remain unidentified: 4 311 in the Gauteng province between 2014 and 2017.

Zimbabwean migrant Kholakele, who lives with her husband Arnold and their five children in a crammed building in downtown Johannesburg, has heard the stories of people gone missing. The family entered the country illegally three years ago to find work.

Afraid that one day they will end up as anonymous bodies in the streets of Johannesburg, where crime rates and traffic accidents are steep, they barely let their children out of sight. “If one of them stays away for longer than 10 minutes, we phone them,” says Kholakele. When undocumented migrants die and nobody claims their body, there’s no collection of them in any national or international tally.

A lot of the dead bodies end up in a mortuary in Hillbrow, one of the city’s most dangerous and notorious neighbourhoods, for pathological research. It’s South Africa’s busiest morgue, with 3 000 bodies being investigated every year. Ten percent of those remain unclaimed and unidentified. 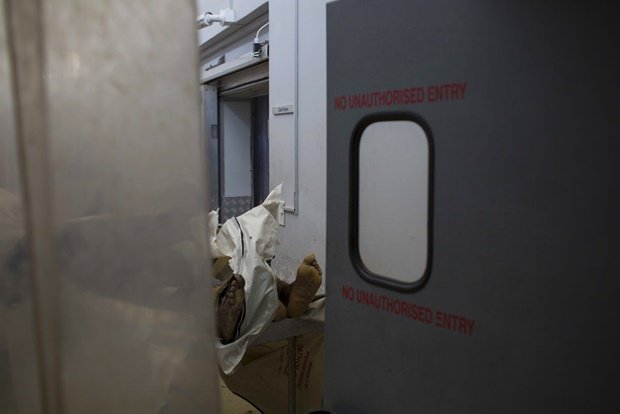 The body of an unidentified man at a mortuary in Hillbrow, Johannesburg. (Bram Janssen, AP)

The fingerprints and DNA collected of the unidentified are used to create a more detailed database that police can use for future identification, or relatives can search to find a loved one.

After pathological research, they are brought to their final resting place, the Olifantsvlei cemetery, a large plot of farmland outside Johannesburg. Men in white overalls lower the chipboard coffins one by one, in stacks of five, into 2.7m-deep holes in a field of high grass and dried red earth. When the men leave, all that is left are tiny placards with ‘Paupers Block’ written on them. 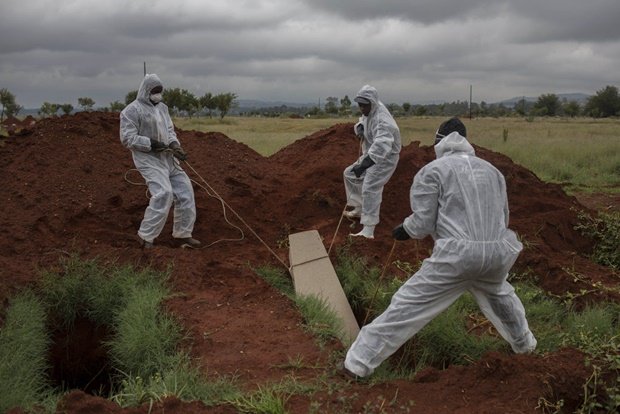 Mortuary workers bury the coffin of an unidentified male in a “pauper grave” at a Olifantsvlei cemetery outside Johannesburg. (Bram Janssen, AP)

Maybe Francis Nkomo lies in one of those graves. His sister is hoping for an answer.

“I’m just praying to see him back,” Banele says. “Or if someone can tell me that he died, we can all have peace.” 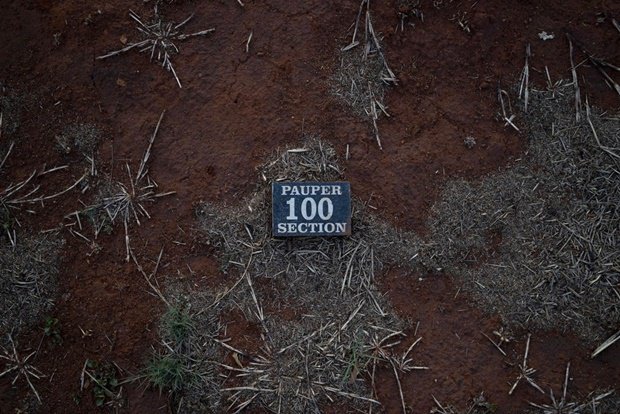 A “pauper grave” where at least five bodies of unidentified people are buried in each grave. (Bram Janssen, AP)