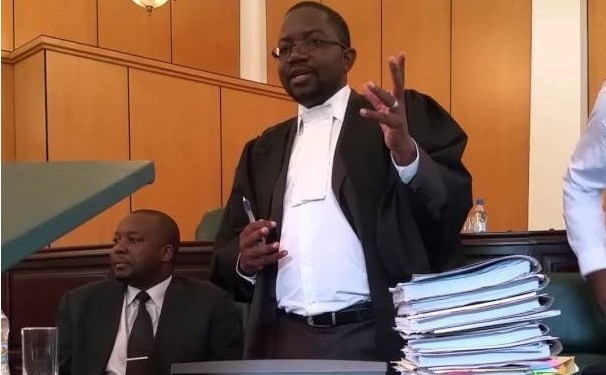 Mpofu’s lawyer Beatrice Mtetwa said there was radio silence from the police until about 4PM, when they said they were adding a third charge.

“He was cooped up in the cell all day until they came with a new charge around 4PM. Now they accuse him of stealing a client from another law firm,” Mtetwa said.

Mpofu was arrested on Monday after presenting himself at a police station after armed police twice raided his homes. He was charged with two counts of defeating the course of justice.

Police allege that he falsified an affidavit from someone who “does not exist” to challenge the appointment of Prosecutor General Kumbirai Hodzi last year.

That application was abandoned, before being refiled, with a Harare lawyer Joshua Chirambwe now the main applicant. On the second charge, police say the affidavit used by Simbarashe Zuze, the applicant in the first case, was “plagiarised” by the Chirambwe.

Mtetwa said Zuze existed and had been spoken to by police before. The second count disclosed no offence, she said.

In the third charge added on Monday, police allege Mpofu conspired with Harare lawyer Everson Samukange, who quit Venturas and Samkange law firm without notice in 2018, to divert a file for client who was at that law firm into their own client.

“The Law Society of Zimbabwe is anxious and concerned over the motive behind the arrest and detention. The Society recognises and stands by the principle that a lawyer must never be associated with the cause of his client,” the body regulating the profession said.

The arrest of Advocate Mpofu “should outrage all believers in the rule of law in Southern Africa,” Ngcukaitobi said.

Dali Mpofu said President Emmerson Mnangagwa “has now lost all his marbles”, adding on Twitter: “He also lost an election by the way! SADC and AU where are you? All that rhetoric about Africa Day last week was just empty twaddle?”

Mtetwa said police – who can only hold Mpofu for a maximum 48 hours within which they should present him to court – promised to present him to the Harare Magistrates Court at 8.30AM on Wednesday.

Police, apparently fearing protests outside the court, blocked traffic into Harare on Tuesday, although insisting that they were only enforcing the Level 2 coronavirus lockdown.

Mpofu shot to prominence when he represented MDC leader Nelson Chamisa in his unsuccessful bid to overturn Mnangagwa’s victory following a disputed election in July 2018.