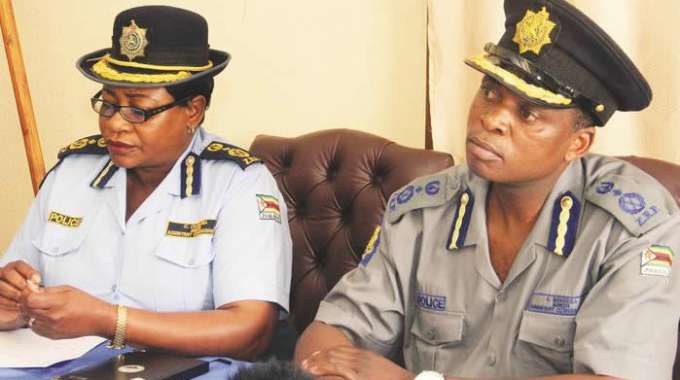 Innocent Ruwende Senior Reporter
The Zimbabwe Republic Police (ZRP) says it will not brook mediocrity in its ranks and that all cases of political violence reported before, during and after political parties’ internal polls, including the forthcoming harmonised elections, are dealt with expeditiously and professionally.

Responding to media questions yesterday at a press conference on law and order around the 2018 harmonised elections, Senior Assistant Commissioner Charity Charamba said the police force had introspected and knew exactly which areas required redress.

“The police are no longer doing business as before, but in this new trajectory, police officers have been given guidance and there is a vision to deal with all cases irrespective of your political party, your stature in life, your colour or your gender,” said Snr Asst Comm Charamba.

“Inasmuch as you (journalists) are also asking about the statement, it means that something was not being done in the way that you expect police officers to do their work. I am saying this time around the leadership has made it very clear that it is no longer business as usual and all police commanders were addressed and people are working to achieve results,” she said.

“Internally, we have also introspected and seen that as police, there are areas where we need to improve. You are free to assess as media after at least one month if police are genuine,” she said.

Speaking at the same press briefing, Senior Assistant Commissioner Erasmus Makodza, who has been appointed Commander 2018 ZRP Harmonised Elections, said the police would do everything in their power to ensure the forthcoming national elections were violence-free.

“That is what every Zimbabwean is wishing for. That is what the region is wishing for. International observers also are wishing us the same thing, so we must respect that. Basically, we are not theorising anything, what we are saying is what we are going to do. For your own information, (in) the fewer cases we have recorded so far, most of the accused persons have been arrested and some of them are in jail as we speak after being denied bail,” he said.

Snr Asst Comm Makodza said the judiciary in liaison with the police and other stakeholders has set up special courts throughout the country to speedily deal with politically motivated crimes.
Similarly, the police “has set up teams of experienced investigators in provinces to expedite the investigation and compilation of dockets for prosecution”.

The ZRP, he said, had also engaged political parties, the Zimbabwe Electoral Commission (Zec), the Zimbabwe Human Rights Commission and other stakeholders to ensure that an environment conducive for holding of peaceful, credible and violence-free elections in the country.

He also reminded members of the public that intimidatory practices specifically prohibited under the Electoral Act include inflicting or threatening to inflict bodily injury upon a person and abducting a person or detaining a person against his or her will.

The law also makes it illegal to cause or to threaten to cause unlawful damage to a person’s property, including withholding or threatening to withhold from any person assistance or benefit to which that person is legally entitled.

Further, compelling or attempting to compel a person or persons to attend or participate in any political event, as well as preventing or obstructing a political party or candidate from campaigning in any election, is deemed illegal.

Snr Asst Comm Makodza implored the media to report factually during the plebiscites and avoid fanning hate speech and falsehoods.

“We urge the media to continue to report objectively and factually during these plebiscites and let us all avoid peddling hate speech and falsehoods.”