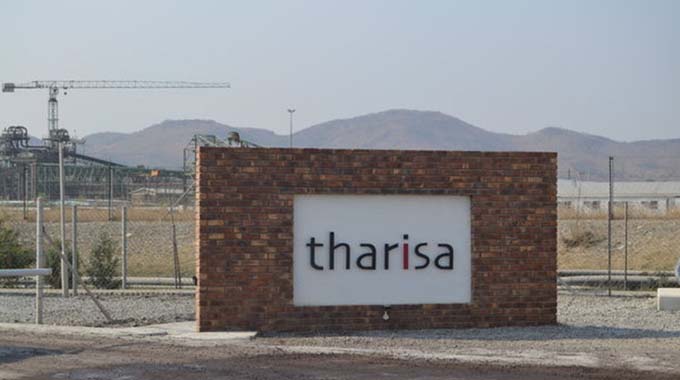 Africa Moyo Business Reporter
HIGH value investors continue to be charmed by the prevailing political environment brought by the new dispensation, and are stampeding for investments particularly in the mining sector.

This comes as Tharisa, which is listed in South Africa and England, announced on Wednesday that it had snapped up a 26,8 percent stake in Karo Holdings from Leto Settlement in a deal worth $4,5 million.

Leto Settlement is an indirect shareholder in Karo Holdings, which inked a staggering $4,2 billion investment deal targeting platinum and chrome mining, a 300MW solar project to fire the project while excess energy if fed into the national  grid.

In a statement on Wednesday, Tharisa – which is worth $480 million – said: “Tharisa is pleased to announce that it has acquired a 26,8 percent shareholding in Karo Mining Holdings Limited for a total cash consideration of $4,5 million from the Leto Settlement, a related party being an indirect material shareholder in Tharisa, in terms of a sale and purchase agreement entered into between Tharisa and Leto.

“Key rationale for the acquisition and benefits for Tharisa shareholders include: Tharisa was not previously involved in Zimbabwe due to political uncertainty in the country.

“Recent improvements in the political landscape have precipitated a decision by Tharisa to explore geographic diversification opportunities in Zimbabwe, renowned for having the world’s largest PGM deposits outside of South Africa.”

The country, which is set to hold harmonised elections on July 30, is enjoying a new lease of life under President Mnangagwa who was sworn-in on November 24, 2017.

Opposition political parties are campaigning freely, with no cases of violence — apart from intra-party disturbances — having been reported so far.

Preliminary observer missions have hailed the pre-election period as conducive for the holding of free, fair and credible polls.

The prevailing peaceful atmosphere and the tweaking of the Indigenisation and Economic Empowerment Act to allow foreign investors to own 100 percent of their projects, apart from the diamond and platinum sectors where the 51 /49 shareholding structure remains.

Already, firm investment enquiries have surpassed $16 billion since December last year, with most projects expected to take-off after elections.

Karo Platinum (Pvt) Limited, an indirect 50 percent held subsidiary of Karo Holdings, applied for and was awarded PGM rights under a special grant covering an area of 23 903 hectares.

The resource is large-scale with a potential 96 million ounces platinum.

Tharisa says the mine is open pittable and Great Dyke PGM projects are typically low-cost, which is likely to give the company a return on investment.

It has already released $8 million for exploration and sampling in the proposed mining area.

Karo Holdings, which signed an agreement with Government on March 22, is the parent of entities such as Karo Platinum, Karo Coal Mines, Karo Power Generation and Karo Refining.

ZIC is expected to be under the purview of the Ministry of Finance and Economic Development.

The mining project will supply its ore to Karo Refining, which is set to be held 75 percent by Karo Holdings while in Karo Coal and Karo Power Generation, Government will have 10 percent direct interest, with employees and communities getting the remaining 15 percent.

Karo chairperson Mr Loucas Pouroulis has over 50 years’ experience in the mining sector.

Mr Pouroulis is well-known for setting up Petra Diamonds which is listed on the London Stock Exchange (LSE) and is valued at $560 million.

In 2006, Mr Pouroulis set up Tharisa, which is listed on the JSE and LSE.

The company hauled 1,3 million tonnes of chrome concentrate and about 144 000 ounces of platinum last year.