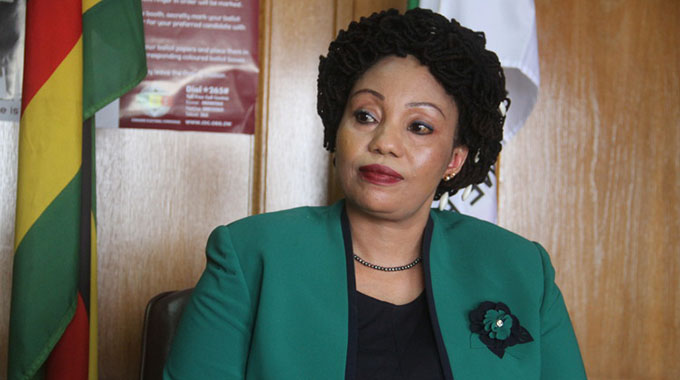 Zvamaida Murwira Senior Reporter
Postal votes that were cast in Bulawayo last week remain valid and cannot be nullified unless there is evidence of electoral malpractice that warrants their cancellation, the Zimbabwe Electoral Commission has said.

ZEC chairperson Justice Priscilla Chigumba said postal voting that was exercised by police details at Ross Camp Police Station in Bulawayo last Thursday will stand despite claims by opposition elements such as the MDC Alliance that the process was not above board.

Justice Chigumba said this during an interactive engagement with observers last Friday.

One observer had asked if the postal vote that was conducted in Bulawayo would remain valid given the tension that surrounded the process and scenes that unfolded on social media where MDC Alliance members stormed the scene to try to disrupt the process.

“Unless we actually have evidence that somebody was intimidated or forced to exercise the postal vote against their will. So my preliminary answer will be ‘yes’ they will be valid unless there is evidence of electoral malpractice around the exercise of that postal vote,” said Justice Chigumba.

She said postal voting was optional and applicants were free to withdraw and present themselves to a polling station during the July 30 harmonised elections.

She said a 5 695 706 voting population had been registered as at June 1 which will be on the final voters’ roll following the de-duplication, adjudication process, edits and corrections done to date.

The figure, she said, excluded about 92 745 registrants who would be on the exclusion list for various reasons.

Some of the reasons for people to be excluded was those with invalid identification numbers who constituted 11 767, those sharing same ID numbers but with different details who were yet to be confirmed by the Registrar-General’s Office as the true holders of such documents.

She said there were 1 157 who were excluded because they shared the same ID numbers and details but were two different people and were still to be confirmed by the RG’s Office.

“The registrants whose name does not appear on the 2018 voters’ roll were excluded, we have sent them back to the relevant authority with the constitutional mandate to register ID numbers and once those anomalies are corrected those registrants are at liberty to reregister and appear on 2023 voters’ roll,” said Justice Chigumba.