President scoffs at US decision to renew sanctions 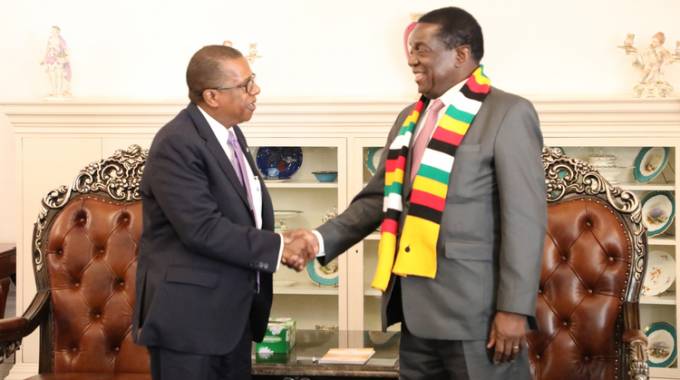 Source: President scoffs at US decision to renew sanctions | The Herald August 16, 2018

Zvamaida Murwira Senior Reporter
President Mnangagwa yesterday scoffed at the decision by the United States of America to renew illegal sanctions against Zimbabwe. He implored newly-appointed US Ambassador to Zimbabwe Mr Brian Nichols to have a correct appreciation of events here.

Government, the President said, would remain focused on developing the country and safeguarding peace.
President Mnangagwa made the remarks at State House while addressing journalists after holding a meeting with Mr Nichols, who had paid him a courtesy call.

The meeting came a few days after US President Donald Trump signed into law the amended Zimbabwe Democracy and Economic Recovery Act aimed at renewing illegal sanctions against Harare.

Asked what his views were on Mr Trump’s decision to renew sanctions, President Mnangagwa said: “Should I concern myself about what is happening in Washington? Do they concern themselves about us?”

President Mnangagwa said Mr Nichols, who presented his credentials last month, should have a proper understanding of political developments in the country.

“These discussions are necessary. He is an ambassador from the United States to Zimbabwe. He must have correct appreciation of the environment in the country. He came into the country to have that appreciation.

“We were able to share his views and my views on the current situation in the country and we are moving forward as a country,” said President Mnangagwa.

“We would want our people, yourself to be peaceful, to convey the message of peace, tranquillity and unity. Only when the country is stable and people are peaceful, can development thrive, not when we are throwing stones at each other. That is the message you people must convey.”

Earlier on, Mr Nichols said Zimbabwe had registered positive developments over the past nine months, but bemoaned violent incidents that occurred on August 1, 2018.

Six people died while property worth thousands of dollars was destroyed in the MDC-Alliance-orchestrated violence.
“The events of August 1 to the present had been deeply troubling to the international community and my Government in particular. President Mnangagwa’s commitment to transparency in investigating those events is very important for my Government,” said Mr Nichols.

Commenting on the signing of Zdera last month, Mr Nichols said the law was meant to update a number of provisions.
“This brings it in conformity with the reality and advocates for reforms in the area of democracy, human rights, economic reforms and rule of law. These are all important steps which I know President Mnangagwa is committed to and Nelson Chamisa is committed to. We believe that this provides a framework of our cooperation with Zimbabwe,” said Mr Nichols.

Political observers accuse Washington of harbouring a pre-conceived view by renewing illegal sanctions before the harmonised elections which have since been endorsed by local and international organisations, had been held.

“Zidera deals with loans and arrears to international financial institutions, it does not deal with individuals. What it calls for are investigation into past human rights abuse, reforms to the judicial system, promotion of rule of law, it calls for economic reforms, land tenure, and I am sure these will be debated vigoruously in the next Parliament,” said Mr Nichols.

He denied allegations that his country was sympathetic to the MDC Alliance as Washington had failed to condemn the wanton destruction of property by supporters of the opposition.

“We do not support any particular party or persons or political figure in Zimbabwe,” he said.
Mr Nichols claimed his country was concerned by reports of intimidation of opposition party members and assault of people in high density suburbs.

This is despite a meeting by Foreign Affairs and International Trade Dr Sibusiso Moyo with diplomats dismissing such claims.
“The violence of August 1 2018, which resulted in death of six people, intimidation of opposition polling agents, violence in the densely populated suburbs around Harare has always been issues of concern, the Zimbabwe Human Rights Commission has put up a statement which addresses, their view and concerns are things my Government share,” he said.

Mr Nichols said he was encouraged by the commitment by President Mnangagwa’s administration to set up an independent investigation into the violence that rocked central Harare.

He said the Constitutional Court should prove to the people of Zimbabwe that it was impartial when it hears a presidential election challenge lodged by Mr Chamisa who lost to President Mnangagwa.

“That is a question (of impartiality) that would be answered by the performance of the court and not by me or any other person giving their opinion.”