HARARE – A top prison official threatened to kill MDC vice chairman Job Sikhala after accusing him of aspiring to lead Zimbabwe, a court heard on Monday. 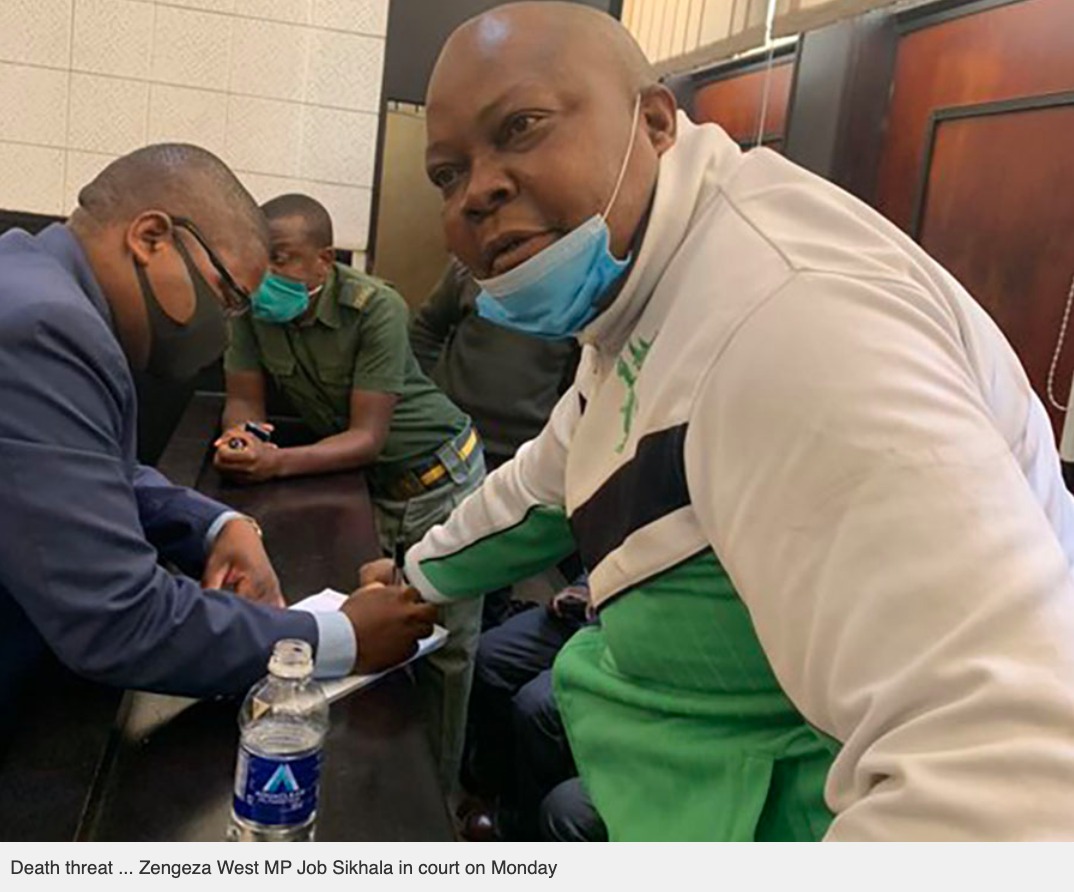 George Mutimbanyoka, the officer in charge of Chikurubi Maximum Security Prison, allegedly kept Sikhala handcuffed and in leg irons for a whole day on Sunday, a day after he was taken to the prison accused of inciting public violence.

Sikhala’s lawyers are arguing against his placement on remand and want the charges thrown out. Harare magistrate Lanzini Ncube is hearing arguments which continued on Tuesday.

The Zengeza West MP’s lawyer Harrison Nkomo told Ncube: “He was advised that he (Sikhala) wanted to be the president of this country which is undesirable. He was told that he shall die in this prison and was asked to provide a mobile number for his next of kin to be advised when he dies.”

Mutimbanyoka allegedly instructed a junior officer, one Murima, to handcuff Sikhala for an entire day. He was also in leg irons for the entire day on August 23.

“This was despite that he is not a D Class inmate but the officer in charge condemned him and instructed his juniors to detain him in D Class which is for condemned prisoners. He was told by fellow inmates in D Class that seven of them had tested positive to Covid-19 the previous day. On Sunday, four others tested positive with the deadly virus,” Nkomo added.

Sikhala was not provided with protective clothing nor sanitised, the court heard.

“Our client no longer feels safe to be detained at Chikurubi Maximum Security Prison. He is willing to stay at any other prison and also we apply that the allegations to be investigated,” the lawyer added.

Nkomo also asked the court to order the fumigation of cells and also that PPE be availed for Sikhala and other inmates in the cell.

The state prosecutor Garudzo Ziyadhuma said they were hearing of the concerns for the first time, and they would submit a report after carrying out investigations.

The magistrate ordered that investigations “must be done as soon as possible.”

Challenging placement on remand, Jeremiah Bamu, one of Sikhala’s lawyers, said the politician had not made any statement with potential to incite violence.

He said information on the warned and cautioned statement was different from that on the charge sheet.

“Allegations were cherry picked from the warned and cautioned statement,” said Bamu.

Bamu said charges which Sikhala is facing could be based on speculation as he was not shown any videos nor given a chance to listen to any audios which prosecutors said gave rise to the charges.

Ziyadhuma said the investigating officer would be called to testify on Tuesday on the nature of the charges.

Zimbabwe’s courts have been hearing cases of lawyers, nurses, journalists and politicians who are among scores arrested for criticising the government, assisting activists or demanding better working conditions.

Sikhala is one of the latest arrested after being in hiding for weeks following police accusations that he was mobilising anti-government protests. Another opposition legislator, Prince Dubeko Dube, has been charged with inciting violence after he gave employees of a supermarket two face masks with the hashtag “#ZanuPFMustGo.”

The latest arrests came as journalist Hopewell Chin’ono and opposition politician and government critic, Jacob Ngarivhume, were denied bail for a third time since being arrested for agitating for protests.

The demonstrations were banned because of Zimbabwe’s anti-coronavirus measures.

Ngarivhume, the leader of Transform Zimbabwe, and Chin’ono have been in jail since July 20 on charges of inciting public violence.

More than a dozen demonstrators who tried to protest, were detained from the streets. They were charged with inciting violence and then freed on bail.