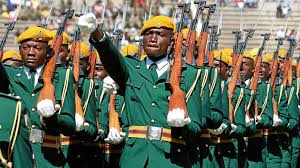 HARARE – Government is reportedly proposing hiking the salary of members
of defence forces by at least 20 percent.

The Zimbabwe Defence Forces (ZDF) are composed of the Zimbabwe National
Army (ZNA) and the Air Force of Zimbabwe (AFZ).

A letter from the Defence Service Commission (DSC) chairperson Pretty
Sunguro to the permanent secretary in the ministry of Defence, Martin
Rushwaya, troops – who played a key role in the ouster of Robert Mugabe
and President Emmerson Mnangagwa’s subsequent enthronement – will get a 22
percent increment.

“Following consultations between the office of the chairman, Defence
Forces Service Commission, minister and the secretary for Defence and War
Veterans Affairs please find attached a key scale with 22, 5 percent
special allowance applied to members of the Zimbabwe Defence Forces.

“Accordingly, proceed and effect adjustment with effect from July 1 2018
as indicated on the key scales,” read part of the letter.

“I have seen the letter but that is not ours, that belongs to the Defence
Forces Commission,” said Mugwisi.

Efforts to get a comment from Sunguro were fruitless.