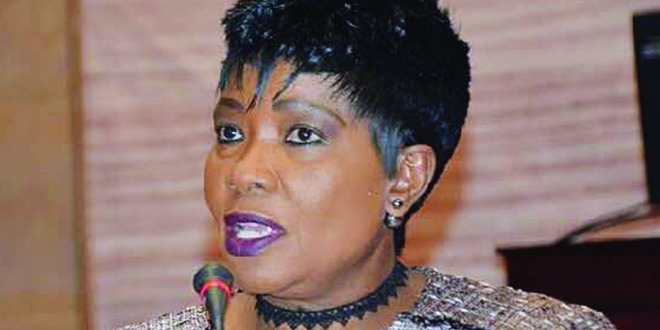 FIRST Lady Auxillia Mnangagwa, who was fingered alongside her son Collins as owners of the gold bars weighing 6kg intercepted at Robert Gabriel Mugabe International Airport last Monday, yesterday challenged the police to prove that she was an accomplice in the foiled attempt by businesswoman Henrietta Rushwaya to smuggle the mineral.

Auxillia absolved herself and her son, and dared the Zimbabwe Republic Police to “clarify” how she was fingered by Rushwaya’s alleged accomplice Gift Karanda (44), who told police detectives that the gold, worth over US$300 000, belonged to her and Collins.

She also claimed her son Collins, was a “hard-working individual” and was not involved in any illegal activities.

This was after a leaked internal police memorandum seen by NewsDay on Friday showed that following Rushwaya’s arrest at the airport with the gold, Karanda, a Zimbabwe Miners Federation (ZMF) secretary for external affairs, tried to save his president (Rushwaya) by dropping the name of Mnangagwa and her son.

Karanda told detectives at the airport that the gold Rushwaya was carrying “belonged to the First Lady and one Collins, a son to the First Family, who was supposed to have brought it, but due to other commitments had requested Rushwaya to transport it on his behalf”.

In her statement, the First Lady defended herself saying she served the interests of the nation first and not of any individual.
The police yesterday sought to clear her name saying Karanda’s claims that the First Family was involved were “false” and “malicious”.

“I do not engage in illegal narrow-minded pursuits like gold smuggling. I am challenging the police through their relevant office to issue a statement. I am a strong advocate for transparency and honesty and any continued silence by the police may be misconstrued as a cover-up,” Auxillia said.

“If there is any incriminating evidence against me, I challenge the police to present it to the nation without fear or favour. If there be none, I also challenge the police to say so.”
She claimed that she was an anti-corruption advocate, adding that the statement by Karanda was part of malicious attempts to cow her not to support anti-graft activities.

On her son, Collins, she said: “It pains me that my son, who is hardworking and is an obedient son, is being attacked for no reason other than being a member of the First Family. He is a hard-working person and strives to improve himself day-by-day. As a mother, I am proud of his work ethics and encourage him not to be affected by malicious rumours.

“I am an advocate for peace and love and work hard at helping those who I can. I am greatly aggravated by the continuation of these false stories and claims. However, I remain unshaken and will continue to serve my nation in its entirety to the best of my ability.”

However, Collins was previously linked to a US$60 million COVID-19 procurement scandal involving former Health minister Obadiah Moyo who was arrested along with Drax International local representative Delish Nguwaya.

Both of them are out on bail.
In response to the First Lady’s challenge, the police yesterday immediately issued a statement to the effect that the statement by Karanda, who is facing charges of obstructing the course of justice, was false.

“This relates to his utterances to law enforcement officers at the Robert Gabriel Mugabe International Airport on October 26, 2020 when he indicated that there was no case as the gold belonged to the First Lady Amai Auxillia Mnangagwa and her son Collins Mnangagwa,” national police spokesperson Assistant Commissioner Paul Nyathi said.

“Comprehensive investigations have proved that the statement by Karanda was false and malicious with intent to defeat or obstruct the course of justice. As such, he was accordingly charged and the case is pending before the courts.”

He claimed that there were some individuals and groups, including Karanda, who were abusing the First Family’s name in their illegal activities.
Mangwana claimed that Karanda’s evidence was intended to intimidate law enforcement agencies, thereby obstructing the course of justice.

“His Excellency President Emmerson Mnangagwa has demonstrated his zero tolerance stance on corruption and organised crime. On her part, the First Lady Amai Auxillia Mnangagwa has distanced herself and family from any of the suspects involved in the gold smuggling case,” the Information secretary said.

“All security apparatus has standing orders to enforce the law blinded to who a person is, knows or is related to. The law itself has adequate provisions to deal with those who interfere with its application or processes. Those who also try to defeat the course of justice by invoking names of powerful of influential people will face the full wrath of the law for it.”