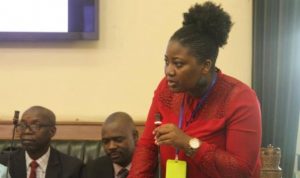 When a couple of dozen bees scouted out a route under my roof and into my ceiling this week I fiddled around blocking holes with bits of newspaper and the odd squirt from a tin of fly spray  but then the main swarm of thousands arrived and I knew I had a problem. For a few hours the swarm hung ominously from a branch in a nearby Msasa tree, shivering and quivering. There was no point pretending that the Queen Bee wasn’t under the mass of bodies or that a tin of fly spray would solve the problem and so I faced reality, lit a big black smoky fire and kept it going for hours until they finally moved on.

Pretending is very much on our minds in Zimbabwe this March 2019. For seven months we’ve all been pretending that things are normal but nothing is normal anymore. “How are you?” we ask our friends. “Fine,” they reply but we know that’s not true and they know that we know.  Every day it feels more and more like 2008 in Zimbabwe: people can’t afford enough food, can’t afford transport, are cutting their medicines in half, can’t afford  school fees; the bills are piling up and all the while the government are very busy with their own veil of pretence.

Nothing’s been fine or normal since armed soldiers shot unarmed civilians in broad daylight in the capital city last August. Nothing’s been fine or normal since armed soldiers were again released into our towns and cities in January 2019 resulting in multiple deaths, rapes, abductions, torture, assaults and detentions. The Human Rights NGO Forum say there were 1803 violations attributed to our security forces during January. Numerous MPs and civil society leaders who called for stayaways at that time have been arrested and charged with treason; two more were arrested this week: MP Joana Mamombe and MP Charlton Hwende.

Then there’s the pretence with our money. Three weeks ago the government announced a new currency called the RTGS Dollar and said that all our US dollar bank accounts were now RTGS dollars and their value would ‘float’ at an exchange rate that would be announced every day. Ever since that announcement the rate hasn’t floated at all, it hasn’t even pretended to float, and has stayed at the commencement rate of 2.5 RTGS dollars to 1 US dollar. As we feared, individuals have not been allowed to withdraw their own money from the banks in US dollars (at the non-floating or any other rate) but only in Bond dollars and coins and only in very limited amounts. This week the Governor of the Reserve Bank, speaking at a parliamentary hearing said: “The bond note did not fail… What failed is the economy, due to excess government expenditure.”

Speaking at the same parliamentary hearing, the Reserve Bank Governor said  that the RBZ will “arrest inflation the moment they see any red flags.”  This week the country’s tax authority, ZIMRA, announced a 300% increase in import duty. A red flag surely, considering we import around 80% of all our food?

Maintaining the pretence of price stability, a short news clip by the Harare City Parking PR manager went viral on social media last week. After hiking  parking prices by 50%, the PR manager said: “We have not adjusted the price for parking, what we have simply done is to reduce the time from $1 per hour to $1 per 30 minutes.“

Next is the ongoing pretence with fuel. Two months after the President announced an increase in fuel prices from $1.30 a litre to $3.30 a litre and at the same time insisted that one USD dollar was worth exactly the same as one Bond dollar, we are again sitting in fuel queues. Two months ago government blamed foreigners for fuel shortages saying they were coming in and buying up all our fuel at cheap prices but we all knew that it was actually because they weren’t releasing US dollars for fuel imports. This week the government announced that fuel consumption has gone down by 35 million litres a month, due to reduced consumption. Reduced consumption we ask, shouldn’t that be reduced supply?

Finally there came the news of compensation for commercial farmers, a topic that gets dragged out regularly to help maintain the pretence of  this “New Dispensation”  in Zimbabwe. Finance Minister Mthuli Ncube said last week: “I must say that this is an issue that I am currently seized with and I am very pleased to say that we as Government have made a lot of progress.” The Minister said he expected that valuations of seized farms would be completed by the end of March. The Minister did  not say if the valuations were according to international standards; where the money would come from; if it would be in US dollars, Bond Dollars or RTGS dollars. The big question is: if the Zimbabwe government can’t afford to import fuel, can’t even afford to import paracetemol tablets for its hospitals, how are they going to pay compensation to farmers whose homes, businesses and farms were seized nearly two decades ago.

Until next time, thanks for reading this letter and my books about life in Zimbabwe, love cathy