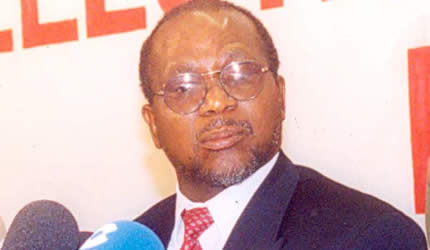 Farirai Machivenyika Senior Reporter—
Government has urged public servants to continue reporting for duty and reiterated its commitment to adequately take care of their welfare. The chairman of the Public Service Commission and Service Commissions, Dr Mariyawanda Nzuwah, said this in a statement announcing pay dates for November for public servants and pensioners yesterday. “As is always the norm all public servants are expected to report for duty every day and timeously and to provide services to all the people of Zimbabwe in rural and urban areas with the greatest of efficiency.

The Zimbabwe Federation of Trade Unions welcomed the intervention by the ZDF urging all workers to continue putting shoulder to the wheel. “We are also urging all progressive and patriotic employers not to unwantonly close businesses, factories, banks, shops, etc. We urge all workers particularly those that are formally employed, the farmers, peasants, vendors to continue peacefully with their usual day-to- day chores as they are guaranteed peace and stability by our defence forces.

“As ZFTU we have confidence in the pronouncements made to the nation by the Commander ZDF General, Dr Constantino Guveya Chiwenga. ZFTU urges workers to do their duty of developing the country as we are forever the vanguard of the economy.” The Zimbabwe Liberation War Collaborators also paid tribute to the ZDF.

In a statement, Ziliwaco secretary-general Cde Jabulani Mbetu said the ZDF actions had restored the revolutionary spirit in Zanu-PF that had been eroded by reactionary elements that had infiltrated the party. “We had much to lose by this revolution diminishing, our status as veterans of the struggle. Our traumatic pains of the revolution were not going to heal by the loss of this legacy.

“Once again thank you comrades for the restoration which we had lost hope by events which were at play. We would like to call all war collaborators to re-energise yourselves to restore the revolution by economic development activities, unlike people who had been scattered by imperialist elements let us preach peace and development to our people,” Cde Mbetu said.

Meanwhile, South African President and Sadc chairman Jacob Zuma yesterday said he will send special envoys to Zimbabwe and Angola in light of the current situation. In a statement, President Zuma called for calm saying Sadc would continue monitoring the situation.

“The President is sending the Minister of Defence and Military Veterans Ms Nosiviwe Mapisa-Nqakula and the Minister of State Security, Advocate Bongani Bongo, to Zimbabwe to meet with President Robert Mugabe and the Zimbabwean Defence Forces.

“President Zuma spoke to President Mugabe earlier today (yesterday) who indicated that he was confined to his home but said that he was fine. South Africa is also in contact with the ZDF. The special envoys will also be sent to the Republic of Angola to see President Joao Laurenco, chairperson of the Sadc Organ on Politics, Defence and Security, to brief him on the situation,” read the statement.