Mugabe’s life and career in politics 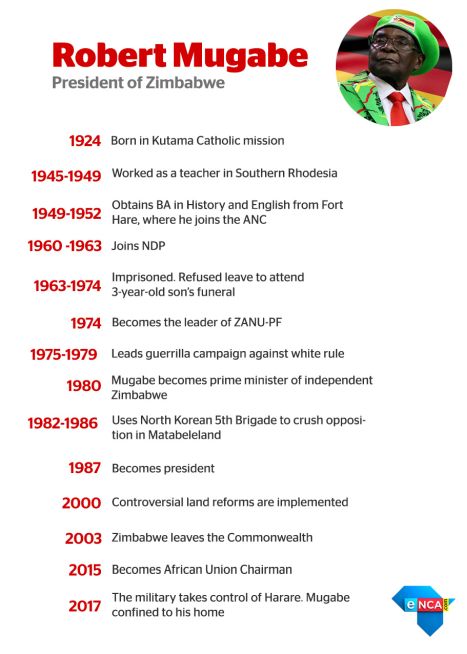 In the 1950s, Mugabe moved to Ghana, where he worked as a secondary school teacher.

HARARE –  Zimbabwe’s President Robert Mugabe is currently confined to his home.Mugabe has been in power for 37 years.

The story of Robert Gabriel Mugabe begins in the Zvimba district of colonial Rhodesia, where he was born in 1924.

The young Mugabe attended a missionary school and went on to qualify as a school teacher.

Soon after obtaining his teaching qualification, Mugabe headed to South Africa, where he enrolled at the University of Fort Hare.

This is where he rubbed shoulders with future African leaders such as Kenneth Kaunda and Julius Nyerere.

In the 1950s, Mugabe moved to Ghana, where he worked as a secondary school teacher.

This is where he met his first wife Sally Heyfron – they couple married in 1961, in what’s now known as Harare.

Rhodesia, as it was known then, was in the grips of colonial oppression –  Ian Smith’s white supremacist government firmly in control.

“We are non-racialist in our approach. That is, we regard an individual as an individual. And that everybody must be accorded his full political rights – whether he be white or black, educated or uneducated, rich or poor. And this is why we are, at the moment, struggling to earn for our people ‘one man, one vote’,” said Robert Mugabe as Zapu Publicity Secretary.

The party was subsequently banned in 1964 by Smith’s regime and its leader was imprisoned for ten years.

But, by 1979, Smith’s time was up – and the Lancaster House Agreement was signed in December of that year.

Not long after taking over the reins in Zimbabwe, Mugabe had a fallout with his once political ally, Joshua Nkomo.

Mugabe accused Nkomo of plotting to overthrow the government.

In the early days’ post-colonial ruling, the Zimbabwean government offered free healthcare for the poor and scrapped primary school fees.

The University of Zimbabwe became a hub of learning – and the country came to be known for one of the highest literacy rates globally.

In 1992, his wife Sally died – Mugabe re-married in 1996, exchanging vows with his former secretary, Grace Marufu.

By 1999, Zimbabwe still bore the scars of its turbulent colonial past – White farmers owned over 27-million acres of land.

Mugabe backed the wave of sometimes violent land invasions that swept the country, prompting Western powers to slap the government with sanctions.

“We don’t mind having and bearing sanctions banning us from Europe. We are not Europeans. We have not asked for any square inch of that territory. So Blair, keep your England. And let me keep my Zimbabwe,” said Zimbabwean President Robert Mugabe.

The Movement for Democratic Change challenged Mugabe’s stranglehold on power.

But, the state fought back – MDC supporters were attacked and jailed.

The South African president helped secure a deal, paving the way for elections the following year.

Morgan Tsvangirai won the first round – delivering Mugabe’s first and only electoral defeat.

Set to face his rival in a run-off, Tsvangirai pulled out, saying his supporters were in danger.

The two leaders then agreed to share power in September 2008 with Mugabe at the helm and Tsvangirai as prime minister.

Zimbabwe recovered somewhat – it replaced its currency with the US Dollar and hyper-inflation became a thing of the past.

In the 2013 election, Mugabe won over 60% of the vote – his victory was marred by controversy with the opposition saying the poll was rigged.

The following year, the president fired Joice Mujuru, the woman who’d served as his deputy for a decade – she was accused of trying to topple the president.

A week later, army chief Constantino Chiwenga warned that the armed forces would be forced to intervene if the “purging” doesn’t  stop.

The afternoon of 14 November 2017 military vehicles proceeded toward Harare.

The roads leading to government offices and buildings are blocked off – Mugabe and his family are confined to their home.