Retracing a hero’s life and death 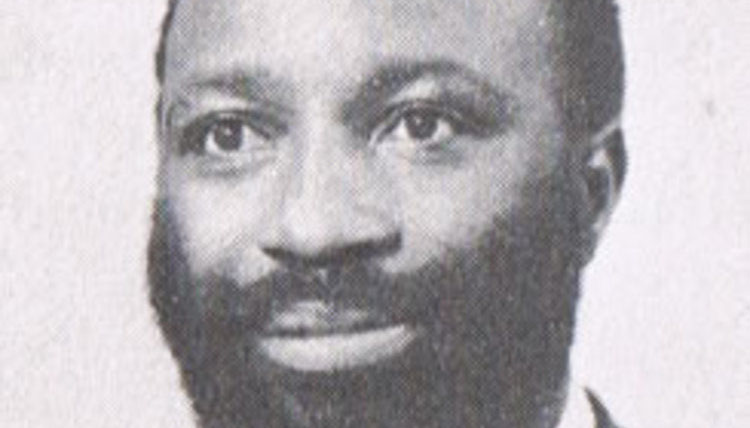 Isaya Muriwo Sithole
This is the second contribution in a three-part series on the life and death of Dr Edson Sithole.
The first article was published by The Sunday Mail on October 14, 2018.

This week we locate the life and circumstances surrounding the death of the national hero within the broader context of the national and regional politics of the time and the dynamics that were at play immediately prior to, and at the time that Dr Sithole (pictured) met his fate.

When the African National Council was formed on December 16, 1971, Dr Sithole was appointed the party`s publicity secretary.

At the time that the Anglo-Rhodesian Settlement proposals were announced, there was no viable African political party within the country.

This state of affairs had obtained since the ban on Zanu and the PCC (Zapu) and the subsequent incarceration of most nationalist leaders in 1964. As such, while exiled liberation organisations (Zanu, Zapu and Frolizi) were engaged in guerrilla efforts along Rhodesia`s northern borders, a nationalist vacuum existed inside the country.

The Pearce Commission, which was testing the acceptability of the proposals, would have conducted its inquiry in the midst of this vacuum had the African National Council not have been formed at the opportune moment.

So confident of a “yes” vote was the Rhodesian government that it even released several Zanu and Zapu nationalists from prison in the latter part of 1971, including Dr Sithole.

The belief had been that seven years of imprisonment and detention had softened their attitudes.

This mistake was later repeated at the end of 1974 to pave way for détente as we shall see.

As things happened, it is these Zanu and Zapu leaders from prison and detention who immediately reacted to the Pearce Commission exercise by forming the African National Council to mobilise African opinion against the Anglo-Rhodesian constitutional proposals.

Among those who began preliminary discussions on the formation of the ANC were, from Zanu, men like Michael Mawema, Edson Sithole and Eddison Zvobgo and, from Zapu, were men like Josiah Chinamano, Cephas Msipa and Arthur Chadzingwa.

They then decided to set up a balanced (Zanu-Zapu) national executive based on the principle of parity.

It was agreed that the leader of the proposed council should be a non-controversial personality, preferably someone who was neither Zanu nor Zapu, but someone of national stature, influence and respectability.

Names were thrown about and discussed, but a consensus was reached on Bishop Abel Tendekai Muzorewa, who was approached and agreed to lead the campaign against the Anglo-Rhodesian Settlement Proposals during the Pearce Commission from January to March 1972.

And “No!” was the verdict passed on the Anglo-Rhodesian Settlement Proposals.

On June 20, 1974, Dr Sithole was arrested and detained at Gatooma (Kadoma) prison for allegedly torpedoing an agreement said to have been reached between the African National Council and the Rhodesian government.

On September 14,1973, the ANC and the ruling Rhodesia Front (RF) jointly announced that they had agreed on a set of principles which could lead to a solution of Rhodesia`s problems.

These principles were based essentially on the principle of “parity”.

Dr Edson Sithole, who was the ANC publicity secretary, announced: “We are willing to have an interim sort of arrangement, one where the Europeans will not dominate the Africans or the Africans the Europeans – in other words, some form of parity. But we won’t accept less than parity.”

Secret negotiations between Bishop Muzorewa and Smith continued during late 1973 on into 1974, and then, it was announced that Ian Smith`s government had offered Muzorewa a deal that included six more African seats added to the existing 16 seats in Parliament, making a total of 22.

The offer promised a progressive six-seat increase after every specified period of time.

When Bishop Muzorewa brought the “package offer” to an ANC executive meeting in Highfield, it was summarily rejected.

A few days thereafter, Dr Edson Sithole, the ANC publicity secretary who announced the rejection, was arrested and detained by the Smith regime.

Bishop Muzorewa and other ANC officials decried this and other actions of the Smith regime, but to no avail.

The Smith regime believed, and perhaps correctly so, that it was Dr Sithole`s militancy that was holding Muzorewa back in the negotiations, as Sithole also doubled up as Muzorewa`s legal and constitutional advisor in the early phases of the negotiations.

By the middle of 1974, it had become clear that nationalist guerrilla pressure against the Smith regime could neither be contained nor wished away indefinitely.

Further, the sudden collapse of the Portuguese empire in Africa came as a nightmare to the Smith and John Vorster regimes, for the Mozambique border with Rhodesia and Angola`s border with Namibia were now open to nationalist guerrillas.

The balance of power was changing at a very fast pace. Smith and Vorster realised that under these changed political paradigms, it would enhance their fortune if they devised a formula that would yield a ceasefire.

So it was that Vorster set in motion a policy of détente, aimed at good neighbourliness with some independent African states to the North. The intention was to arrest the revolution, at best to silence guerrilla guns in Zimbabwe without Smith`s yielding much to African demands.

A major objective would be to forestall the possible use of Zimbabwe as a rear base for liberation movements in South Africa.

Détente is a French word which means “relaxation of strained relations”.

In the Southern African context it meant the relaxation of strained relations between white minority regimes in Rhodesia and South Africa and their African neighbours which came to be known as the “frontline states”, because they were the ones closest to the spot of conflict.

These were countries which, because of geographical proximity and for psychological and political reasons, were involved in efforts — diplomatic and/or military — to achieve majority rule in Zimbabwe, Namibia and South Africa.

Kenneth Kaunda, then President of Zambia, responded positively to Vorster`s feelers on détente.

On October 26, 1974, in a veiled invitation to Vorster, Kaunda offered his “good offices to anyone who wished to use them to pursue peaceful change in Southern Africa”.

This was a very dangerous time for many nationalists because a lot of hypocrisy and double-dealing characterised the whole détente policy.

It was a time when Zimbabwe’s liberation movements were divided and there was inter-party and intra-party rivalry which the enemy exploited along tribal, regional and even ideological and personal lines.

Efforts at unity were also underway.

Ken Flower, director of the Rhodesian spy organisation, in his book “Serving Secretly”, notes that Kaunda was not sincere to the policy of détente just as he was to his philosophy of humanism.

The struggle had reached its height and it was clear to both the nationalists and the Rhodesian Front that majority rule was imminent. It was a time when the Rhodesian Front was becoming progressively brutal, using murderous tactics against political opponents, especially those nationalist leaders perceived as militant, obstructive, radical and/ or “troublesome” and, therefore, an obstacle to the policy of détente.

There was also a temptation on the part of the nationalists to seal secret and clandestine political deals among themselves and with the enemy, thus endangering the lives of and sometimes physically eliminating those who disagreed.

The détente policy crystallised the situation and made it more complex.

This was the time when the code “Sinjonjo tamba wakachenjera” became popular in Zanu. It was a period so fraught with dangers and contradictions.

Amidst the confusion and contradictions of détente, Dr Sithole was taken from prison on December 3, 1974 to attend the discussions which led to the signing of the Lusaka Declaration of Unity on December 7, 1974, under which the African National Council was made an umbrella organisation to the Zimbabwe liberation movements led by James Chikerema, Joshua Nkomo and Ndabaningi Sithole.

Dr Sithole’s acerbic statements, especially when he became the publicity secretary of the African National Congress — then the umbrella body grouping most of the black political parties — did not endear him to the Smith government.

He was constantly harassed and questioned by police and even on the day he disappeared, police had earlier visited him.

In 1975, the Rhodesian Front was moving swiftly against those nationalists perceived to be militant in the Zimbabwean liberation movements at a time when there was supposed to be détente and that was what made the situation dangerous from a personal security situation.

For the guerrillas, 1975 was also to be a trying time. Many senior commanders had been lost in the war and in the Nhari rebellion and commanders with less experience had been rapidly promoted to fill gaps in the command structure.

The OAU had withdrawn recognition of Zanu and Zapu on January 8 at a meeting of the Liberation Committee in Dar es Salaam, and had specified that funds and support would go only to the ANC.

The transit of arms and ammunition through Zambia was reduced to a smuggled trickle as relations with Kaunda`s government, committed to détente, deteriorated.

The transitional government in Mozambique, preoccupied with its own independence set for June, was about to become a member of the frontline states grouping and the OAU, both of which backed the ANC and the “ceasefire”, and cadres who withdrew in Mozambique were disarmed.

The Rhodesians were able to add to the confusion early in the year by circulating “ceasefire” leaflets telling guerrillas to hide their weapons and surrender to the nearest soldier, policeman and district commissioner, or leave the country.

If caught with weapons, the leaflets said, they would be treated as enemies.

When the ANC in Salisbury acquired some of the leaflets, Dr Sithole, who was the publicity secretary and a member of Zanu, accused the Rhodesians of “flagrant violations” of the agreement.

He said in a statement, “A ceasefire means no more than stopping to shoot and to advance beyond the lines where the respective forces are found; it does not at all mean surrender”.

Dr Sithole reiterated the nationalist position that a formal ceasefire would not be announced until after the date has been set for a constitutional conference and “meaningful discussions” had begun.

Just before 8am on March 18, 1975, an explosion ripped through Chitepo`s car as he reversed in his driveway at 150 Muramba Road, Chilenje South, killing Chitepo, his bodyguard Silas Shamiso and a child who was in a neighbour’s garden.

In Salisbury, Rhodesian authorities hastily denied responsibility for the murder.

Robert Mugabe, the most senior Zanu official at liberty after the re-arrest of Reverend Sithole two weeks earlier, blamed the “evil work” on the Rhodesian regime operating through the “willing hands of its Zambian agents”.

Dr Sithole, the ANC publicity secretary and a Zanu member, told reporters that only the Smith government would have anything to gain from the assassination, which he said had “shattered irreparably any hopes of a negotiated settlement”.

Dr Sithole further said that he expected Rhodesian authorities to move against him and Mugabe at any time.

Within two weeks, however, a Central Committee meeting was held at Mushandirapamwe Hotel and resolved that Mugabe and Tekere must go to Mozambique to ensure the continuation of the war.

Dr Sithole also attended this crucial meeting in Highfield and with the departure of Mugabe to Mozambique, Dr Sithole was left in the spotlight of Rhodesian authorities.

In July 1975, Dr Sithole accused the Smith government of poisoning him at New Sarum after he fell ill while on a flight to Lusaka. He said a white police officer had given him tea at the airbase as he and others waited for a plane.

The Rhodesia government countered by saying that Sithole had eaten a tin of baked beans and that had upset his stomach.

Isaya Muriwo Sithole is a legal practitioner practising in Harare and is a co-founder and executive director of the Dr Edson FC Sithole Foundation. Feedback: isayamsithole@gmail.com