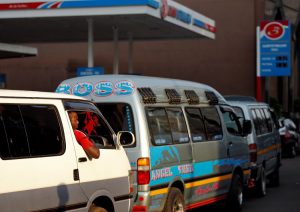 HARARE (Xinhua) — Fuel prices, which continue to rise in Zimbabwe every week, have failed to deter motorists from maintaining long queues at service stations where the commodity remains elusive.

The prices are based on an exchange rate of 9.5 Zimbabwe dollars to the U.S. dollar and also take into account free on board price movements and the current duty regime, ZERA said on its Twitter handle.

After another 50 percent price increase in May, prices have generally been increasing marginally every week.

Authorities had anticipated that price increases would reduce the appetite for fuel among motorists, but lately these are largely being implemented to keep in tandem with losses of the local currency against the U.S. dollar.

When the first massive fuel price increase was effected, the rate of the local currency to the U.S. dollar was 1: 1.

Although the prices are generally rising every week, they remain among the cheapest in the Southern African Development Community.

However, some observers say that the increases remain the major drivers of inflation as producers and retailers factor them in when determining prices of commodities.