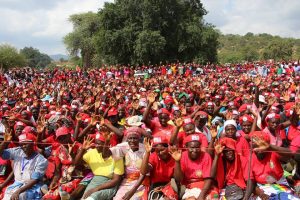 Source: Road to Victory – Nelson Chamisa on Tuesday – The Zimbabwean

I had enriching engagements over the weekend in rural Manicaland where I interacted with ordinary Zimbabweans from Chipinge to Nyanga as we up the ante in our rural campaign ahead of this year’s watershed plebiscite.

I drank deep from the wise people from the East as both the old and the young told me of their daily hardships and tribulations and how they wish to consign their poverty by voting for transformation, opportunity and prosperity in the forthcoming election.

In Chipinge, I also took time to pay my last respects to one of our late old cadres James Wizen Dhliwayo, who passed on. As I paid my respects at the homestead, I had the opportunity to interact with traditional leaders. Tradition and culture play an important pivotal role in our society.

My first port of call was Kondo business centre in Chipinge West on Saturday where I interacted with Zimbabweans in this marginalized part of our country. The people told me of their grinding poverty amid the plenty of diamonds and the Chisumbanje ethanol plant in their area whose profits have been spirited away by the well-heeled political and business elite.

In the searing heat and the dry soils of Chipinge, I saw dilapidated infrastructure and a people desperate to have their sense of hope renewed by a truly caring government. I felt touched by their persistent optimism even amid the grinding poverty so palpable all around them.

It was heartening that at least, hope continues to spring among the despondent people of Chipinge.

At the well attended rally at Kondo, I took the opportunity to pay tribute to the gallant sons and daughters of Chipinge who have faithfully served this nation with unbridled patriotism.

Indeed, this is the home of the iconic Ndabaningi Sithole, former Reserve Bank of Zimbabwe governor Kombo Moyana Godwin Matanga, Happyton Bonyongwe and the Zamchiyas who have all left their own unique footprints on the sands of this country’s history.

Indeed, Chipinge will always be a community for change, as has always been reflected by her people’s voting pattern since the country’s political independence in 1980. Like Binga, Matabeleland and Mola, Chipinge has been a notable outpost of underdevelopment despite the galaxy of its prominent sons and daughters who have consistently and patriotically served this country.

At the Kondo rally, I articulated our vision for the new Zimbabwe and walked them through our seven hubs of civilization as well as our detailed transformation agenda in the spheres of governance, the economy, social services, infrastructure rehabilitation and international re-engagement.

I spoke about spatial devolution, the need for devolution as well as the imperative of growing new cities and new nodal points around the economic activities that are particular to certain areas.

I told them of our vision to uplift rural areas by ensuring that they have modern homes and access to electricity. It is possible to generate power by harnessing sunshine that is so abundant in Africa.

I spoke about the imperative of growing our economy by growing cash crops such as coffee and tea. The Tanganda tea estate in Chipinge has lots of potential for growth and can become a key nodal point for development and revenue generation both for the community and the country.

Given the crippling but legitimate strike by the country’s hard working nurses and doctors, I reminded the people of Chipinge of the fallacy by the current government that Zimbabwe is open for business when it is not open for health.

Our new incoming government will spare a thought for the desperate cries coming from throughout the country—especially this barren and desolate land of Chipinge that is crying out for attention from those occupying the lofty citadel of government.
We pledge that we will not fail them; that we will attend to the legitimate concerns of these underdeveloped communities.

Remembering the Lord in whatever we do
On Sunday, I left Mutare for Ruwangwe in Nyanga North near the border with Mozambique.
It is my maxim that whatever we do in politics or whichever vocation, we must never forget to serve and plead with our Lord in Heaven.

Before I left Mutare, I had the occasion to go church, where I joined other Zimbabweans in prayer.

Indeed, whatever our circumstances or social station in life, the Lord we serve is a God of eternal goodness and mercy.I saw the Lord’s grace at the church Mutare and had occasion to see His power at work.

Rural Ruwangwe—an outpost and leeway to liberation
At Ruwangwe business centre in the mountains of Nyanga North on the border with Mozambique, I had occasion to interact with yet another teeming crowd exuding hope and unbridled optimism.

The people told me of their harassment by some traditional leaders who continued to demand the serial numbers of their voter registration slips. They told of dilapidated infrastructure, of the now impassable Bhinya road that links the area with Mayo, Murehwa and Mutoko. They recounted the sad story of how Nyanga, a once-thriving tourist destination,  has become of shell of its former self owing to collapsed infrastructure  and the poisoned politics that persists in the country despite the much-vaunted fallacy that Zimbabwe is now open for business.

The people of Nyanga of North said they were ready for a truly new dispensation that will be ushered in by the next election. They said all who must lead this country have to first pass through their area as Robert Mugabe and Edgar Tekere did way back in the 1970s when they passed through this area into Mozambique. Ruwangwe, they said, had always been a gateway to liberation and transformation icons and it was in that spirit that they were receiving me and other leaders.

They said they were heartened that I had also passed through their area to interact and share with them our policy ideas. This, they said, was ominous of the good times ahead for the country.

As we drove out of the picturesque surroundings of scenic Nyanga, I felt pained at how as a country we were failing to harness the huge potential tourism. In our policy document document to be unveiled in the coming weeks, tourism was a major hub that could be a source of massive revenue generation for our nation.

Indeed, as the scriptures say, where there is no vision, people perish.
And Zimbabwe is on the verge of perishing because of a clueless leadership.

Going rural—our new thrust
While I addressed the people rural Manicaland from Chipinge to Nyanga, several MDC-T leaders and MDC Alliance partners were strewn across the rural countryside; spreading the same message of transformation, opportunity and prosperity.

There is massive support for the party and the Alliance in the rural areas and all our leaders addressed equally huge crowds in Tsholotsho, Hurungwe, Gokwe and Mudzi, among other areas.

Next week, I will be in yet another rural area, interacting with the people and listening to their sordid tales of how they are grinding it out in these hard times.
Positive change is now imminent!

Adv. Nelson Chamisa is the MDC-T President and the MDC Alliance Presidential Candidate.