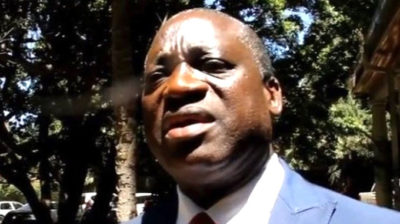 Thupeyo Muleya, Beitbridge Bureau
THE Zimbabwe Revenue Authority (Zimra) has since July been forced to manually enforce customs regulations on commercial imports coming into the country through Beitbridge following a major breakdown on its mobile cargo scanner.

This emerged during a tour of the Beitbridge Border Post recently by the Deputy Health and Child Care Minister, Dr John Mangwiro.

Zimra officials told the minister that efforts to fix the machine had failed since July 22 when it broke down.

They said in the absence of the scanner, they were subjecting most commercial vehicles to Physical Examinations (PEs).

This is done to verify consignments and enforce compliance, a process that takes 12 hours or more to complete.

However, a mobile cargo scanner may process over 200 trucks daily.

At least 1 300 commercial trucks enter the country’s and Sadc’s busiest in land port of entry daily and the figure has been swelling with Botswana (another Sadc transit route) have extended their lockdown to April 2021.

Zimra’s spokesperson, Mr Francis Chimanda said yesterday that the cost of repairing the scanner is yet to be ascertained, as troubleshooting was still underway.

“The repair process is being delayed by the unavailability of one of the Nuctech specialist engineer who is out of the country and awaiting immigration clearances, his work permit expired during the Covid-19 lockdowns while he was out of the country.

“On average the machine can scan between 60 and 120 trucks per day. A minimum of 20 and a maximum of 35 PEs are conducted on commercial importations daily,” he said.

Mr Chimanda said scanning was used as a deterrent measure apart from its ability to detect any undocumented goods that will have been loaded in a truck.

As a result, he said no major non-compliances were detected when it was functional owing to importers refraining from loading any undocumented goods in trucks that will be scanned as their detection would be inevitable.

The official said a varied range of goods, both finished products and raw materials were being imported into the country via Beitbridge.

At the peak of smuggling a decade ago, Zimra introduced cargo and baggage scanners to curtail intrusive leakages across borders.

However, the criminal vice has stood the test of time, with syndicates ever-changing tact to beat the system.

Recently, Zimra was forced to introduce the 100 percent searches on goods being imported from South Africa as consolidated cargo and the move has helped to reduce smuggling and improved revenue collections.

The authority is reportedly collecting an estimated $150 million in revenue daily at Beitbridge as a result of the latest move.

In July, the Revenue Authority activated an imports relief facility to help Zimbabweans based in South Africa to send groceries and other goods home in commercial trucks through Beitbridge Border Post.

South Africa is home to thousands of Zimbabwean migrant workers, most of whom are supporting their families by sending groceries home through the services mostly of omalayitsha weekly.

The Zimbabweans are putting together goods and sending them home in trucks with the help of omalayitsha under the consolidated cargo facility.

Zimbabwe imports goods worth an estimated US$3 billion from South Africa annually.