Scene is set for interesting contest in Zimbabwe’s upcoming poll 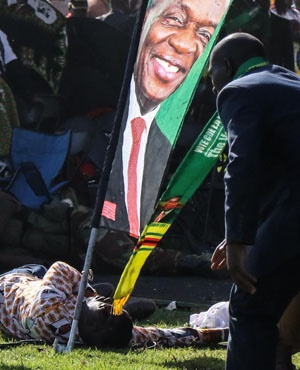 The world waits to see if Zimbabwe will pass the democracy test as it holds its first election after Robert Mugabe next month, writes The Conversation.

Gift Mwonzora, Rhodes University
Zimbabweans are heading to the polls on July 30. They will be making their decisions not only on what appears to be a dramatically changed political landscape, but with looming fears of a destabilised country following the recent bomb blast at a Zanu-PF election rally in Bulawayo. Reports say that the attack targeted President Emmerson Mnangagwa. Opposition parties now fear a crackdown.But Mnangagwa and his deputy immediately pledged that the bomb attack wouldn’t stop the elections going ahead.Nonetheless, the incident is likely to create a climate of fear, insecurity, intense polarity and high securitisation of the state. Even before it happened civil society actors and think-tanks in Zimbabwe had raised questions about the possibility of a rigged election.

But be that as it may, the circumstances are very different from when Zimbabweans went to the polls in 2013. Then Zanu-PF won a two thirds majority.

The upcoming elections will be closely fought between the 75-year-old Mnangagwa and new leader of the opposition Movement for Democratic Change (MDC-Alliance), Nelson Chamisa (40). In addition, the polls will be contested without two men who have dominated Zimbabwe’s politics for decades – Robert Mugabe, who was deposed in 2017 and Morgan Tsvangirai who died in February this year.

These two factors – new leaders and the absence of old ones – set up an interesting contest.

As things stand, the MDC-Alliance is seeking to regain its relevance in the absence of Tsvangirai. Across the aisle, Mnangagwa is seeking to legitimately secure his authority, and the dominance of his party following the November 2017 transition after 37 years of Mugabe’s rule.

The elections are significant for average Zimbabweans too. Citizens are eager for new leaders to kick start the economy after years of decline under Mugabe’s rule.

A lot is at stake for Zanu-PF. The party has aggressively pursued an agenda to restore its legitimacy regionally and internationally. For example, the Mnangagwa administration has repeatedly promised that the election will be credible. It has even taken its reform agenda to the international stage.

To bolster its credible election claim, the administration has also invited international observersfrom the European Union, the International Republican Institute, and the National Democratic Institute, to witness the upcoming poll. Observers weren’t welcome in Mugabe’s time owing to his strained relations with the West for over 16 years ago.

Although the administration has made delivering a credible election a top priority, its promises haven’t inspired confidence among ordinary Zimbabweans and opposition parties.

What remains worrisome is that several issues related to the biometric voter register remain a bone of contention among the contesting parties. If un-addressed, they will raise concerns about the credibility of the poll.

And with just a few weeks remaining until the election and after the official confirmation of candidates, the voters’ roll has not been made available to opposition parties.

On top of this a comment by Zimbabwe’s Electoral Commission (ZEC) chairperson Justice Priscilla Chigumba has raised concerns because it suggests that the elections will take place, no matter what. Her words were:

“The first thing to take note of is once the President has proclaimed the election date, there is nothing short of an earthquake which can stop the election so whether candidates scrutinise the voters’ roll, whether they see any anomalies in it, whatever the anomalies are, whatever legal recourse they have will not stop the election. I want that to be very clear, that is the law.”

Another concern is the fact that the political space is very crowded given that there are 23 aspirant presidential candidates. One possible outcome is that the opposition vote will be split. The likelihood of this happening is more so, given that the main opposition parties have been unable to come together and field a single candidate.

The over-crowded opposition field have diminished chances that Mnangagwa and Zanu-PF could be dislodged.

There are also concerns that a bloated ballot paper will confuse the average voter.

Questions abound as Zimbabwe prepares for the polls. Would Mnangagwa have risked dethroning Mugabe only to allow the opposition to assume the reins of power without a fight? In a telling sign of what might be in store for Zimbabwe, Deputy Finance Minister Terence Mukupe and Minister of State for Masvingo province, Josiah Hungwe revealed that the army would not accept a Chamisa win in the event that Zanu-PF lost.

Will it still be the case once the people have spoken in the upcoming historic poll?