Shot in the arm for father of disabled boy

Source: Shot in the arm for father of disabled boy | The Herald

Simon Budaya strapping his child arrives to receive some goods and money from the well wisher Sam Chibaya for the upkeep of his disabled child at Sam’s Garden in Harare. Picture by Innocent Makawa

Kudzaishe Muhamba Herald Reporter
A CHIPINGE man who is taking care of his son with physical challenges has received donations from well-wishers including Zimbabweans in the diaspora after his plight went viral on various social media platforms.

He narrated that the mother of the child left when the child (Maritz Budaya) was two years old. He is now six.

“Her parents influenced her to leave the child and return home to them. She used to call just after she left but now it has been 3 years without hearing from her,” said Mr Budaya.

He said the fact that his son is still alive and showing improvement is a miracle because when he was born, he was lifeless as he could not show any signs of movement or breathing properly.

“I go with him to the hospital here and there, but I haven’t taken him to a specialist because of financial challenges.” 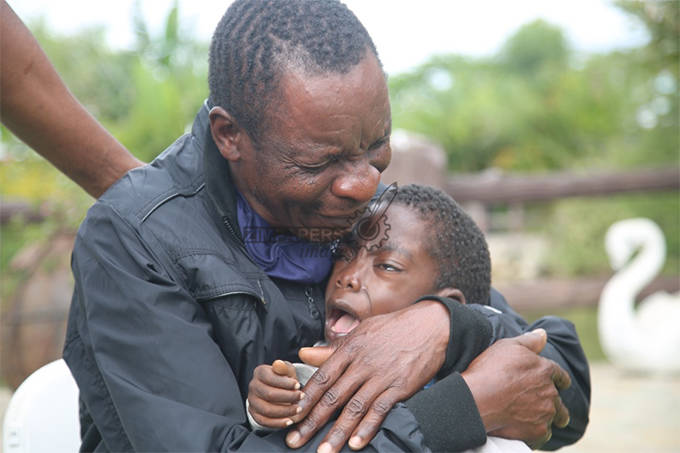 Mr Budaya breaks down after being handed over the donations

Mr Budaya expressed gratitude towards the well-wishers who helped him with finances and goods.

“I would like to thank Mr Sam Chibaya for what he has done, it is not every day that one can come across someone with love enough to give to a strange,” he said overcome with emotions.

Speaking at the handover ceremony, Mr Chibaya , a businessman and philanthropist, said it was gratifying to change someone’s life.

“What we have done here, I did not do it alone. The money was donated by different people in Dallas, America.

“Much appreciation should be given to Tonderai, Clive, and Tsitsi, who did the run around collecting the money from friends, families and other well wishers,” he said.

Mr Chibaya said that what they did was just a portion of what needed to be done, and asked for more donations from the public.

“ The child needs to get checked by a specialist so they can see the way forward on how the child can recover,” he said.