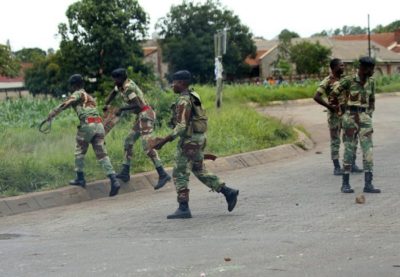 A Nyanga man died after he was allegedly assaulted for straying into a ranch where soldiers were conducting military exercises as he was searching for his cattle.

A badly beaten Tendai Muchesa, of Nyanga’s ward 24, Sadomba Village under Chief Mutasa, was found dumped in a bush close to a road.

Muchesa died while he was being taken to a clinic.

Muchesa’s body is at the Nyanga General Hospital mortuary awaiting a post-mortem that would be done on Tuesday and he would be buried the following day.

“He was looking for his cattle in the ranch when he saw some soldiers,” the deceased’s young brother Zenzo told The Standard.

“In panic, he tried to run away, but dropped his bag and stopped. One of the soldiers hit him with a log on the head.

“He was then taken to a base where three soldiers took turns to assault him.

“They dumped him at in a bush close to the road.

“He was discovered writhing in pain by a 11-year-old boy, who was herding cattle at the ranch. He alerted the elders in the community.”

Zenzo said his brother was taken to his homestead where he started vomiting blood after drinking water.

“He died on his way to the clinic at around 4pm, two hours after he was discovered in the bush at 2pm,” the brother said.

Zimbabwe National Army spokesperson Lieutenant-Colonel Alphios Makotore said he was not aware of the incident.

Police spokesperson Assistant Commissioner Paul Nyathi promised to check with Manicaland police, but he was not picking calls when follow-up calls were made.
Zenzo said police promised to investigate the matter.