All those invading State, council and private land and creating bogus housing cooperatives are criminals that deserve to be arrested and prosecuted for fraud, corruption and land invasions, despite their rank or status in society, Local Government and Public Works Minister July Moyo has said.

In a statement last night, Minister Moyo said Government had noted with concern the rampant illegal sales of land by politicians, both in the ruling Zanu PF and the opposition MDC-Alliance, which is in charge of most councils.

Some of the politicians abuse party regalia while others name-drop President Mnangagwa and other high ranking party members, to grab land and sell it to desperate home seekers.

Zimbabwe has over 1,3 million people on the housing list, creating a fertile ground for land barons to exploit the desperation and fleece citizens of their hard earned money. 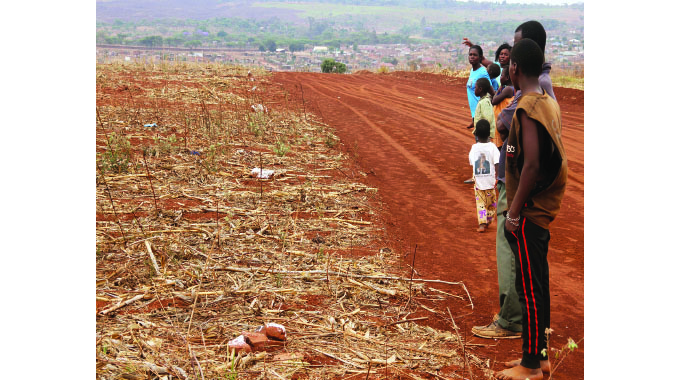 Illegal parcelling of State land by land barons is rampant in Hatcliffe, Harare. Encircled are pegs demarcating stands that had been allocated to home-seekers. — Picture: Innocent Makawa

“It goes without saying that we have seen some politicians abusing their party regalia and positions invading land while name-dropping His Excellency (President Mnangagwa) and other high-ranking party officials as well as opposition parties,” said Minister Moyo.

“It is therefore our position as Government that all those politicians who are invading land and creating bogus cooperatives are criminals who deserve to be arrested and prosecuted for fraud, corruption and land invasions.

“Our authorities in Harare are working with security agencies to ensure that we arrest all those involved in land scams. Land developers who have failed to deliver their obligations of government contracts of developing and servicing land whilst selling stands and pocketing the funds for themselves will be subjected to similar laws of the land.”

The chilling warning comes as one person was arrested yesterday after police raided an area in Hatcliffe, Harare, where people were being illegally allocated residential stands on State land.

A former Zanu PF councillor for the area, Mr Naboth Munyengera, is alleged to be behind the illegal sale of the land to unsuspecting home seekers.

The home seekers were allocated stands after paying an initial US$600 deposit.

When The Herald visited the area, police had cleared the area.

Chief Inspector Gilbert Mhaka from ZRP Borrowdale confirmed the arrest of the person.

“When we arrived and they saw the police vehicle, some of them sped off in a vehicle, while others ran away on foot. We only managed to apprehend one person at the scene who indicated that he had been invited for the allocation of stands.

“So we are making some follow ups to find out who was allocating those stands and we hope the man we have arrested will assist us in investigating who is behind the allocation of stands,” said Chief Inspector Mhaka.

A resident in the area, Mr Kurai Hope, said Mr Munyengera was behind the illegal land sales.

“People are paying US$600 as deposit and are allocated stands thereafter.”

“As the ruling party and Zanu PF Harare Province, we dissociate ourselves from Cde Munyengera’s land baron activities. We have repeatedly warned him against selling State land but he has refused to listen.

“We have also taken up the matter with the office of the Provincial Affairs Minister (Oliver Chidau),” he said.

Government has sent out teams across the country to identify land that was allocated and settled by land barons, council officials and the business community, with a view to fully account for the land and expose criminal activities that include developments without necessary approvals.

Minister Moyo said his ministry was working with the Ministry of Housing in order to regularise most of the illegally settled people.

“However, there will be no regularisation without prosecution while protecting the vulnerable who have been fleeced of their hard-earned money,” said Minister Moyo.

All local authorities have been advised to be strict on land matters and to follow the law, in particular the Regional Town and Country Planning Act, Urban and the Rural Councils Act.

The Regional Town and Country Planning Act, especially Section 24 (4) (Control of Development), criminalises any form of land development without permits or approved plans.

Land barons in breach of this law face up to a year in prison if they fail to adhere to section 32 which criminalises non-compliance to an enforcement order.

The land barons have parcelled out State land, local authorities’ land and even private land across the country.

In Harare, they have invaded Mufakose, Budiriro, Hatcliffe, and Aspindale, among others while in Chitungwiza, power lines, sewer lines, schools, clinics and football fields have been taken over.

A number of councillors and officials have been facilitating offer letters on approved and environmentally sensitive areas.

In Chitungwiza, backdated offer letters have been issued to home seekers for a premium bribe paid to council officials.

Harare Provincial Development Coordinator, Mr Tafadzwa Muguti, is on record saying it was against the country’s laws to construct houses haphazardly, adding that Government was working tirelessly to uproot the menace of land barons.