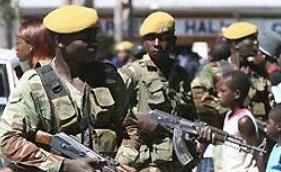 The presence of soldiers patrolling most high density suburbs across the
country has instilled fear and uncertainty in citizens as some areas are
reporting forced curfews.

Coupled with this is the continuous nightly crackdown on civilians,
opposition party and civic society members who are on police wanted list.

The soldiers descended onto most high density suburbs on 14 January to
quell the violence and looting that had ensured following anti-government
protests which left 12 people dead, most of them as a result of gun
shots.

Since those disturbances soldiers have remained firmly on the ground,
hence sending a chilling thrill into ordinary people.

This week, opposition legislators even raised the issue of forced curfews
in Parliament saying there are several areas which are now out of bounds
after 6pm.

But in a recent interview with the state media, Home Affairs and Cultural
Heritage Minister Cain Mathema said government will not fold its hands and
watch lawlessness taking place in the country.

He said security forces will remain firmly on the ground to ensure that
peace and sanity prevails across the country following threats of another
round of violent protests by MDC-Alliance and its affiliates.

He alleged that the perpetrators of the violent protests have being
circulating messages on social media warning people not to report for work
or risk being attacked. The messages threatened that vehicles would be
burnt and property destroyed.

“The security forces have always remained on high alert and firmly on the
ground,” said Mathema. “We are ready for anybody (hooligans) and the law
will take its course. My ministry and the ZRP will do their best to
maintain the law.

“We don’t make the laws, but we enforce them and everybody should operate
within the confines of the law. Look at the nonsense they recently did,
destroying property, killing people and burning cars.”

But social and political analysts said the presence of soldiers has
instilled fear in residents whose freedom has been curtailed as a result.

Social analyst Rashweat Mukundu said the presence of military and police
in high density suburbs is a continuation of a terror campaign on
civilians by the security sector that goes beyond maintaining security,
law and order.

“It is now a political strategy with the intention of intimidating
civilians. Let us not forget that 2004 Rwanda genocide was instigated by
the Rwandan military and in Darfur and South Sudan it was militaries that
initiated genocide and we have to ask hard questions whether the Zimbabwe
military is setting the stages of genocide against civilians perceived as
opponents of Zanu PF.

Political analyst Vivid Gwede said the development is indicative of the
public secret that since November 2017 Zimbabwe’s military has not really
returned to the barracks.

“Not only that, the events of August 1, 2018 and January 14, 2019 onwards
show that the army did not relinquish its clear overlap in policing
duties, especially the law and order maintenance part.

“Zimbabwe has moved from a police state, if at least in appearance, under
Mugabe, to a ripened military state. This has to do with how the current
government came into power.”

Gwede added that the game plan now is to continue making the gun, instead
of the popular vote and general will, the guarantor of that regime.

“Persuasion has radically ceased to be the method of obtaining people’s
consent for the current administration, but naked coercion. This is the
sad story which is unfolding in the suburbs.

“Yet, if we do assume there is agreement about the tactics and ends of the
regime, the question still lingers, is there harmony in the cockpit
itself? People might agree on a journey and still haggle over who drives,”
said Gwede.

Social analyst Rejoice Ngwenya said one mistake that we Zimbabweans keep
making is that Mnangagwa is in control of anything.

“This is the guy whose only exploit is managing to evade (Robert) Mugabe’s
arrest in November 2017. Secondly, Mnangagwa has no clue where to start
from because he doesn’t know what the problem is.

“The military literally `deploy themselves’ at will. It’s like they are
devoid of any command structure – going about shooting, beating up and
raping citizens. He does not have a game plan because he is not in the
game. He is a glorified passenger, a political stowaway to nowhere,” said
Ngwenya.

Political analyst Maxwell Saungweme believes we have a clueless regime in
power that does not know how to handle civil disobedience and demands.

“They were stunned by civilian protests and the apparent rupture and
divisions within security forces with some that supported the protestors.
Instead of opening dialogue with labour unions, civil society and
opposition parties to understand civilian demands, the coup born military
regime defaulted to its original settings of deploying the army.

“Yet by so doing they were exposing themselves sevanhu vapererwa as
military deployment can only be a last resort.

“The deployment is an exploding time bomb and sooner or later positions
taken by army ostensibly to bolster security and augment police services
will be used against the regime itself,” said Saungweme.

He added that government should have learnt from the 2017 coup that heavy
military involvement in civilian affairs breeds coups.

Human rights lawyer Dewa Mavhinga believes mere statements on the security
situation in Zimbabwe are pointless. “The president must order and see to
it that soldiers return to the barracks where they belong while the
government puts in place an Independent Complaints Mechanism to ensure
justice and accountability for serious abuses by the security forces.”

Harare Residents Trust director Precious Shumba believes the language that
has been used by leaders of some social movements, and the subsequent
violence unleashed by the demonstrators when the supposedly peaceful stay
away started leaving a trail of destruction, including the death of police
officers and ordinary civilians.

“From a security sector perspective, every force used against State
institutions and personnel requires urgency and decisiveness, thus they
are positioning the Military and the Police in strategic positions to
prevent further attacks on State installations, and possible violence. The
presence of the military should also be viewed in the light of internal
conflict within the ruling party.  “There could possibly be underhand
moves to internally weaken and destabilise Mnangagwa’s government such
that the army deployment is designed to show the President’s readiness to
deal with all forms of dissent, internally and externally.”

Shumba said citizens’ expectations on the President to put an end to the
army deployments are ill-conceived because there is a real internal
conflict involving different and several actors who are determined to make
Mnangagwa desperate for their involvement.

“My reading of the situation is that the church, media, opposition and the
rest of civil society and the citizenry have to be more objective in their
assessment of the situation without taking a partisan approach in order to
heal the nation.

“The ruling party, military and other state security apparatus do not
appear to be fully under the command of the President, hence the continued
destabilisation in the country.”

Shumba added that Mnangagwa has to demonstrate his willingness and
readiness to sacrifice some of his closest but deceitful colleagues whose
agenda is to make him fail. “On his part, Mnangagwa lacks the capacity to
read the situation and advance his socio-economic agenda.

“Human rights violations will continue to be prominent on the agenda of
all his detractors, while the real issues of corruption, employment
creation, currency reforms and industrial revival and utilisation capacity
of industries will be ignored.”