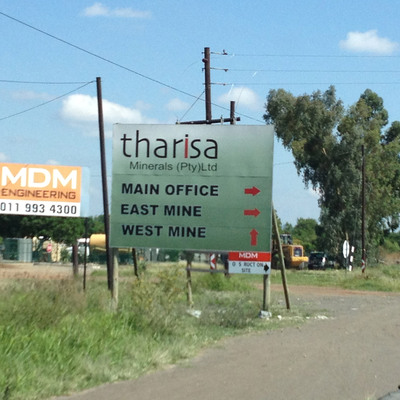 Tharisa mine expands its interests in chrome. Picture: Moneyweb

South Africa‘s Tharisa strengthened its claim as an early mover in a hoped-for Zimbabwean mining renaissance on Wednesday by buying a slice of the chrome-rich Great Dyke region.

Zimbabwe has attracted intense interest from miners with a promise of favourable terms as it seeks to reboot its economy after veteran leader Robert Mugabe was ousted last year.

Tharisa, which mines platinum group metals and chrome in the Bushveld of SouthAfrica, said on Wednesday it had bought a 90% stake in Salene Chrome Zimbabwe Limited with a “nominal upfront payment”.

Tharisa will also spend $3.2 million over the next year on geological tests before setting up a pilot project to treat the chrome deposits, which it says are premium quality and close to the surface, meaning they can be developed quickly and profitably.

The company already has a cooperation agreement with China’s TISCO – Taiyuan Iron & Steel – to sell it chrome, which is used in steel production.

Like other early movers in Zimbabwe, which is still short of regulatory certainty, Tharisa is investing in stages.

“We’re not going in with a mega investment. We’re taking it systematically in a phased approach,” Tharisa Chief Executive Officer Phoevos Pouroulis said in an interview.

“Waiting for everything to settle and to be a perfect climate may be too late. It’s about a first-mover advantage.”

Cyprus-based Karo Resources, owned by the Pouroulis family that leads Tharisa, signed a $4.2 billion (R52 billion) outline deal in March to develop a platinum mine and refinery in Zimbabwe, but it is not clear when the investment will be made.

There was a firewall between the listed company and the family holdings, Pouroulis said.

Leto will retain a 10% stake in Salene and be entitled to a 3% royalty from the sale of the chrome concentrate.

Salene has been awarded three special grants under the Zimbabwe Mines and Minerals Act covering an area of approximately 9,500 hectares (95 square kilometres) on the eastern side of the Great Dyke.

Tharisa also announced results on Wednesday for the six months to March, during which it achieved record production of chrome and platinum group metals, and an interim dividend for the first time of 2 US cents per share.

Tharisa London-listed shares were trading just under 1% higher at 14:30 GMT.