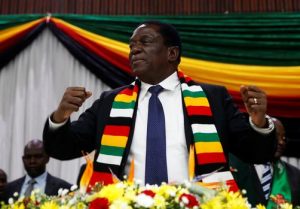 Source: The voice of the people is NOT the voice of God – The Zimbabwean

Over the past seven months, ever since the military coup that ousted former Zimbabwe dictator Robert Gabriel Mugabe in November last year, the country has been inundated with several slogans and mantras meant to legitimize and justify those who took power – however, what is most painful is the use of blasphemy, through the abuse of God’s name for political expediency.

Although, Zimbabwe is, by far, not new to blasphemy by politicians – having witnessed the shameful comparison of Mugabe to our Lord Jesus Christ, and baseless claims by shadowy prophets that he had been specifically anoited by God to lead the nation, and no one was supposed to challenge him – but, the continued abuse of Jehovah’s name is worrying, to say the least.

Possibly, as a direct result of Mugabe’s claim that he was specifically appointed by God to lead this country – and that only He could remove him – those who ousted him have sought to justify their actions by insinuating that their actions were inspired by God.

Otherwise, how else can one explain the now all too familiar mantra claiming that, ‘the voice of the people is the voice of God’?

First of all, as every Zimbabwean knows, Mugabe was not removed by the people, but by the military, as he was held under house arrest, whilst being pushed to resign.

The call for people to go out onto the streets to call for his resignation was just a smokescreen for what was truly happening behind the scenes, in order to give an impression of a popular uprising, so as to camouflage the military action – and, as in fact did happen, avoid international ramifications.

Let us not forget that the call for mass action came after the military had already intervened.

This, by any stretch of the imagination, can never be said to be the voice of God!

Secondly, even if we were to accept that what transpired last November was indeed a popular uprising, what justification is there to claim that this was the voice of God?

Since when has God spoken through popular or mass action?

As much as I am a firm believer in democracy and democratic values, we should separate these from the voice of God – as these are fundamentally divorced from each other.

God does not – and has never worked – through mass or popular action.

In fact, most acts of rebellion against God in the Bible were carried out through popular and mass action.

A couple of examples immediately come to mind – for instance, the mass call for God’s only begotten son Jesus Christ to be crucified – nearly everyone cried, ‘crucify Him!’.

That was not the voice of God.

Another example is when the children of Israel constantly demanded that they be returned to bondage in Egypt, whenever their plight in the wilderness became unbearable – even leading to them creating a idol for them to worship when Moses was up the mountain talking with God.

Furthermore, the children of Israel, later on, collectively demanded a human king from the prophet Samuel – an act that greatly pained God, as it was a direct rejection of His rule.

Several times, from that point onwards, the children of Israel – together as a mass – disobeyed God, as they made their own popular decisions that were not directed by Him.

It is, thus, clear that God never spoke through the people as a collective.

In fact, the true voice of God was always met with resistance from the people, as it was highly unpopular – and it came through His genuine prophets.

If ever there were to be gallup polls in those days, the people with the lowest approval ratings would have been the genuine prophets of God – as the voice of the people was always contrary to that of God.

Even during the days of the Apostles, the voice of God that they spoke was seldom received well, as it was not the voice of the people – leading to widespread persecution and even death.

The desires of humans are always mostly of the world and of the flesh, and are not necessarily of the Spirit and inspired by God.

Similarly, Zimbabweans’ heed to go onto the streets in November last year, was inspired more by long-term suffering and pain that they had endured under Mugabe, than an instruction from God.

There was never any genuine prophet of God who had come forward to lead the nation with a direct message from Him – as did Moses – in calling for Mugabe to ‘let His people go’.

What Zimbabwe, and the world over, lacks are genuine prophets of God – who are truly sent and speak His instructions.

As I have written so many times before, what we have today are mere soothsayers, predictors and healers – from whose power only themselves know – who are more like sangomas, rather than prophets of Jehovah God, who relay His messages.

They are better at predicting what is going to happen, or telling someone their phone numbers, and healing the sick, than actually transmitting messages from God.

The genuine prophets of God were instructed by Him to convey very important messages, and even to appoint leaders that He would have specifically chosen – whilst, at the same time keeping those leaders in check.

Which leaders, have our so-called prophets today, ever appointed as a direct instruction from God?

If the current leadership is truly from God, which prophet was sent to appoint and announce them?

I do not recall ever seeing or hearing of a prophet who was sent to announce to Mugabe that God had said that he should step down, and anointing a new leader – as did Samuel when he told Saul, whom he had anointed earlier on, that God had rejected him, after anointing David.

Even Father Fidelis Mukonori – who was heavily involved in the talks between the military and Mugabe leading to his resignation – at no point, did he ever claim that he had carried a message from God for Mugabe to step down, and Mnangagwa to take over – but, made it very clear that he was just one of the negotiators.

In fact, that is why the current leadership would rather hide behind ‘the voice of the people’, because God never sent any prophet to appoint them.

Predicting a future leader, or the death of a leader, is not prophecy from God, but mere soothsaying – just as a sangoma would do – but, God directly sends His prophets to be directly involved in the appointment of His chosen leader.

Genuine prophets rebuked and corrected those leaders whenever they went against God’s word, as did Samuel to Saul – when he disobeyed His instructions – and Nathaniel to David – after he had committed adultery with Uriah’s wife.

Similarly, other prophets as Elijah and Elisha were sent by God to rebuke and carry instructions to kings and the people – whose messages proven highly unpopular.

However, today we have populist prophets, who are after making as many powerful friends as possible, so as to freely make their millions of dollars from fleecing the people, and shoddy dealings.

They would rather sup with leaders, even when they are corrupt, or abusing and oppressing their own people.

Genuine prophets of God are not there to make friends, or please any section of society, but are strictly there to convey what Jehovah would have instructed them – most of which makes them more enemies than friends, especially from the ruling elite, and the general population, as most of us are prone to go against God’s Word.

If ever we witness a so-called prophet who says or does things that are meant to endear him or herself to a certain section of society, then they are not of God – as with biblical times, genuine prophets were more isolated and hated by nearly everyone.

Yet, these so-called prophets we have today seek favour from men (people), especially from those in power, or the general population – so that they may attend their churches and give them money.

Therefore, as much as leaders would want to be accepted by the people, or to win democratic elections, there can never be any justification to blasphemy against Jehovah – and it is such a shame that those who claim to be men and women of God never stand up against such acts.

The voice of the people is through the democratic process, but the voice of God is through His genuine prophets – and the two are very different.

As a relatively democratic country, Zimbabweans should campaign freely and peacefully – based purely on their policies and manifestoes – but, should never ever abuse the sacred name of God for their selfish political gains.

God is not against democracy, but let us pray for His blessings for our nation, without bringing His name into disrepute – as that will only spell further disaster for our nation.

° Tendai Ruben Mbofana is a social justice activist, writer, author, and speaker. He is the Programmes Director with the Zimbabwe Network for Social Justice (ZimJustice). Please feel free to call/WhatsApp: +263782283975, or (calls ONLY): +263715667700, or email: zimjustice@gmail.com. Please also ‘Like’the’ZimJustice’page on Facebook.