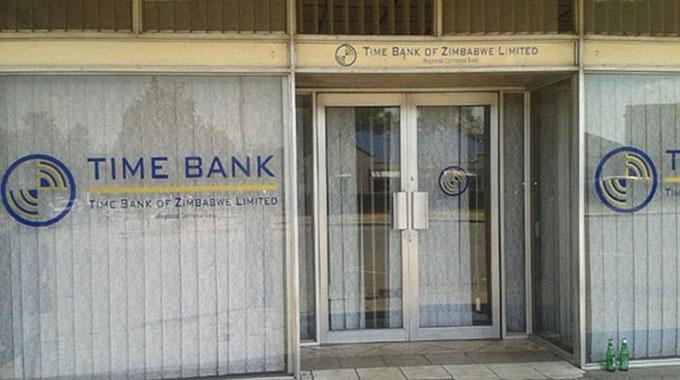 Golden Sibanda Senior Business Reporter
TIME Bank shareholders have filed an urgent chamber application at the High Court seeking suspension of earlier court judgments in a case which went in favour of a party claiming to have been allocated one of their (residential) properties under Government’s land reform programme.

However, the Time Bank shareholders argued that the claimed, but disputed land allocation, under the guise of Government’s land reform programme, was withdrawn when the anomaly was detected when ex-minister Mr Herbert Murerwa, took over the Lands and Rural Resettlement portfolio. Time Bank Investment Company (TBIC Investments), a key shareholder of Time Bank, now wants the earlier judgments against it to be suspended until its appeal against two court judgments (Supreme Court, SC13 /18 and High Court, HH 377 /13), which is currently pending, has been heard by the Constitutional Court of Zimbabwe.

The appeal is presently before the Constitutional Court under case number CCZ 18 /18 and was filed on March 22, 2018.

The property, which the former central bank chief is said to have allegedly once attempted, but failed to buy from the original owners (MC Reimer), when Time Bank had already acquired it, is adjoining to the ex-RBZ Governor’s farm along Mutoko Road. The failed purchase was allegedly the source of the sour grapes that saw Time Bank constantly clash and cross paths with the RBZ during Dr Gono’s reign at the Apex bank.

The historical disputes were eventually resolved by incumbent RBZ governor Dr John Mangudya who implored the feuding parties, in the protracted Time Bank VS RBZ ructions, to “let bygones be bygones”. Since the property is situated in a residential area, part of it has already been sold to bona fide clients as residential stands.

When the ex-central bank chief allegedly tried to buy the farm, an officially designated township land, he allegedly claimed, then, to be doing it for himself and former president Mr Robert Mugabe, also allegedly warning refusal to play ball would mean unspecified consequences, but did not back his claims.

In the supporting evidence that has been submitted to the courts, the applicants claim the respondent (Kennedy Godwin Mangenje) had been used as a pawn, like many others before, in furtherance of personal interests of powerful figures and politicians, the full picture of which he was not aware of.

Mr Mangenje, TBIC Investments averred, is a former manager of the Reserve Bank.

TBIC said the value of the piece of land was enough to capitalise their bank to the tune of $25 million, which is the regulatory minimum threshold for commercial banks.

Time Bank is bidding to re-open after it successfully contested its illegal closure, during Dr Gono’s time, and licence cancellation in 2006. Its licence was restored in 2009, but the central bank did not allow it to re-open, a decision blamed on Dr Gono.

The Time Bank owners argued that there now were better chances of success at the courts in their bid to be confirmed rightful owners of the land in question for unhindered control and custodianship of this contested property, since they regained control of the once closed bank. TBIC said the constitutional points it has raised in its appeal (at the Constitutional Court of Zimbabwe) have never been interpreted before in the current contested ownership case, but before this by Justice Makoni in the Matanda judgment.

“More importantly, the constitutional provisions have not been interpreted after the present Constitution of Zimbabwe became effective,” TBIC submitted in the urgent chamber application.

TBIC said it was the registered owner of the property, which it has had possession of since 1999, and has been issued a subdivision permit by Government, proceeding to subdivide the property into residential stands, with some already sold.

The applicant also averred that the land should have never been allocated as agriculture land during the land reform, which was done in 2005 in terms of Constitutional Amendment Number 17, which only came into being when the property was already designated township land.

“Under section 16B of the former Constitution of Zimbabwe, the State could only acquire agricultural land, but not township land. Despite the foregoing, former Minister of Lands, Didymus Mutasa, purported to allocate the land to first respondent out of spite.”

TBIC also argued that the factual premise upon which the recent judgment by the Supreme Court was made was faulty in that it assumed the applicant (TBIC) bought the property in 2009 when in fact the property was bought as way back as 1999. TBIC claims they had hitherto failed to prove that they were the rightful owners of the land because the documents and title deeds to the property were locked/trapped in closed Time Bank, to which they were being denied access, having put the documents there for safe keeping, a common practice (custodial) by banks, before its closure.

Through lawyers Gama and Partners, an urgent chamber application has since been filed with the High Court by TBIC Investments, for a stay of execution of the High Court and Supreme Court judgments delivered in 2013 and March 2018, respectively, to allow TIBC to appeal against the rulings at the Constitutional Court of Zimbabwe.

TBIC has already filed its appeal at the Constitutional Court of Zimbabwe through its lawyers, and the case is still pending. And through an annexure to the urgent chamber application, TBIC Investments claimed that the attempted land grab stemmed from historical issues and disputes between Time Bank on one side against Dr Gono and Mr Mutasa on the other with whom the Time Bank owners fell out after refusing to obey their orders.

In its Urgent Chamber Application, TBIC Investments cited Mr Kennedy Godwin Mangenje as 1st respondent, the Minister of Lands and Rural Resettlement as 2nd respondent, registrar of deeds as 3rd respondent and Sheriff for Zimbabwe, as 4th respondent.

TBIC and Paul Esau Chidawanyika are cited as 1st and 2nd applicants.

“If the judgments are executed, the 1st applicant (TBIC Investments) will be divested of title to the land and both applicants will be dispossessed of it. The 1st respondent will proceed to exercise ownership rights over the land. The applicants will certainly suffer irreparable harm,” said TBIC.

TIBC said applicants, workers and property will be thrown out; beacons, pegs of land surveyors and other materials used by surveyors to create residential stands in terms of TBIC’s subdivision permit will be destroyed, if the earlier judgments are enforced.

It also said workers residing at the property will be rendered redundant while TBIC will be forced to pay its workers and secure them rented accommodation while not working.

“The applicants’ houses and other infrastructure will be destroyed because the 1st respondent has a different vision and business plan. All the above harm can easily be avoided by awaiting the decision of the Constitutional Court,” TBIC said.

TBIC claimed that its trouble with Mr Mutasa regarding the property started when it refused to support the ex-Cabinet minister claim that he had not been paid for the sale of some property in Cold Comfort.

Time Bank financed the sale, but declined Mr Mutasa’s instruction not to produce evidence of payment in the first sale when the former Cabinet minister allegedly attempted to sell the property for a second time to a different client.