Towards national cohesion in Zimbabwe: Results of the Social Cohesion and Reconciliation Index in Manicaland and Masvingo Provinces

Analysis in English on Zimbabwe about Peacekeeping and Peacebuilding and Protection and Human Rights; published on 20 Sep 2022 by SeeD

Source: Towards national cohesion in Zimbabwe: Results of the Social Cohesion and Reconciliation Index in Manicaland and Masvingo Provinces – Zimbabwe | ReliefWeb 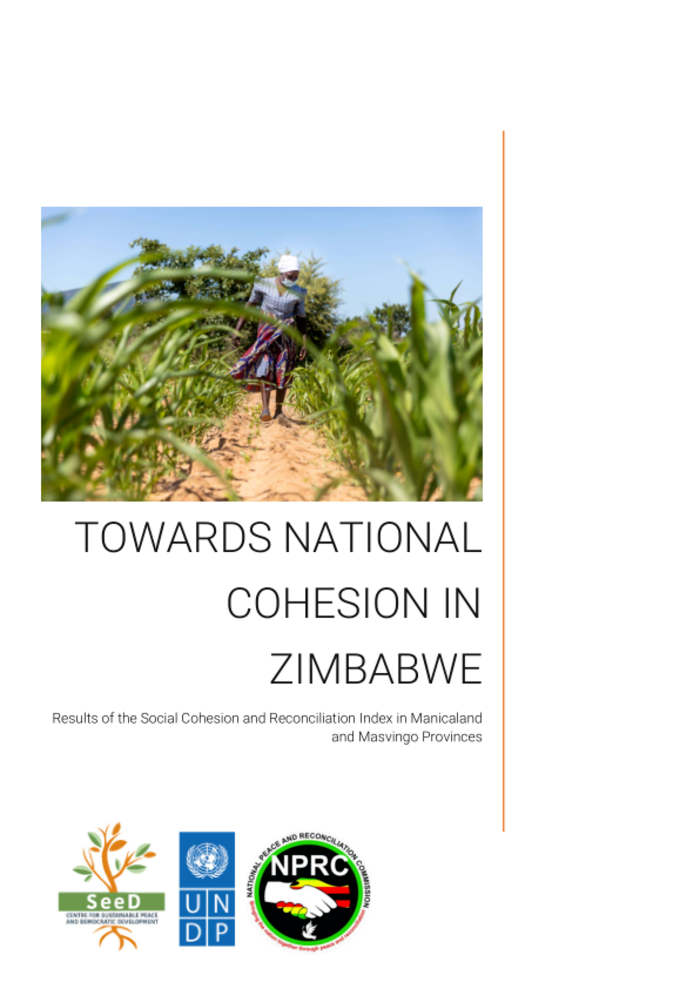 Decades following independence, Zimbabwe continues to face conflict and violence that impede efforts to build inclusive and effective healing and reconciliation within the country. Historically,
Zimbabwe has repeatedly attempted to promote peace and national reconciliation through numerous policies and agreements. Major initiatives include the national reconciliation policy of the 1980s and the Organ for National Healing, Reconciliation and Integration (ONHRI) of 2009.

Unfortunately, these efforts failed to bring the socio-political stability they intended to.
In light of previous drawbacks and limitations, an independent commission, the National Peace and Reconciliation Commission (NPRC) was constitutionally created and mandated to transform Zimbabwe from a culture of conflict and violence to a culture of peace and cohesion. Among other actions, the NPRC will fulfil its mandate by conducting investigations and research on the nature, scope, extent and causes of disputes and conflicts.

As outlined in the NPRC’s Strategic Plan, there is an opportunity for evidence-based research to contribute to enhancing and repairing societal relationships, make recommendations for addressing fault lines and leverage the capacities of resilience towards increased cohesion. The Social Cohesion and Reconciliation (SCORE) Index approach, developed by the Centre Sustainable Peace and Democratic Development (SeeD), provides the NPRC with an opportunity to track conflict and resilience trends and patterns, which would inform the design of effective response mechanisms and programmes towards tailored, inclusive, targeted, and effective healing and reconciliation.

Within the framework of this study, the field surveys were conducted by a team of researchers from the NPRC, supported by SeeD. The data collected was analysed in accordance with the SCORE methodology. Following the design of the questionnaire, data collection was undertaken from February 22 to March 05 2022 in two selected provinces (Manicaland and Masvingo).
The quantitative data collection was performed using the Kobo Collect software and followed a random sampling approach. Overall, the data analyzed is based on the administration of 785 questionnaires to individuals aged 18 years and over. Sampling was calibrated and representative, according to geographical distribution (with 272 respondents for Manicaland and 513 respondents for Masvingo). The following table shows the distribution of the respondents across the provinces and per gender and age group.