Source: Trump insists ‘I am the least racist person’ amid outrage over remarks | US news | The Guardian 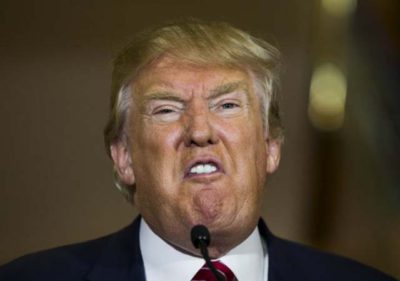 Donald Trump has defended himself amid international outrage over offensive comments he is accused of making about some African, Central American and Caribbean countries, insisting: “I am not a racist.”

The US president was condemned by the United Nations and the African Union (AU) after it was reported that he had referred to Haiti, El Salvador and nations in Africa as “shithole countries” during a White House meeting last week.

As Trump headed to dinner at his golf club in Florida on Sunday, he was confronted by a reporter: “What do you say to people who say you’re a racist?”

The president said: “No, no, I’m not a racist. I am the least racist person you have ever interviewed, that I can tell you.”

Trump was at his golf course on Monday as the US marked Martin Luther King Jr Day. The president retweeted a video of his weekly address, with words including: “Dr King’s dream is our dream. It is the American Dream.”

But his alleged comments continued to reverberate. On Sunday, congressman John Lewis, who marched with King for voting rights in Selma, Alabama in 1965, told ABC: “I think he is a racist …

“I don’t think there’s any way that you can square what the president said with the words of Martin Luther King Jr and what he said about Dr King … It’s unreal. It’s unbelievable. It makes me sad. It makes me cry.”

DeJuana Thompson, a former African American engagement director at the Democratic National Committee, on Monday described Trump’s reported outburst as “a slap in the face” to the legacy of King and others.

Asked if she accepted Trump’s claim that he is not a racist, Thompson said: “I can’t speak to his personal belief system but I think that he believes that and that’s the problem. Even in believing he is not racist, he allows himself to use such damaging language.”

Patrick Gaspard, who was born to Haitian parents in the Democratic Republic of the Congo and was US ambassador to South Africa under Barack Obama, told the Guardian: “Methinks he doth protest too much.

“In the legion of absolutely outrageous things that this man has said and done, what occurred this past week has just tipped us over into a place of near insanity and this seems to be a textbook case of conduct unbecoming the commanding officer of the United States of America.”

“The disparaging remarks come in the wider context of Trump dismantling the foreign policy apparatus of the US,” added Gaspard, who has not been replaced in South Africa.

“These kind of sentiments are disorienting for our partners. They’re not entirely sure what to make of the American identity at the beginning of the 21st century.”

South Africa summoned America’s senior diplomat in the capital, Pretoria, to seek an explanation. The AU, made up of 55 countries, also condemned the remarks, “given the historical reality of just how many Africans arrived in the United States as slaves”.

Trump has faced claims of racism throughout his adult life. He insisted Obama was not born in the US and demanded that his predecessor release his birth certificate.

In 1973 the Trump family business was sued by the Department of Justice for refusing to rent apartments to African Americans. The suit was settled “without an admission of guilt”.

In 1989, he took out ads in newspapers demanding the death penalty after five black teenagers were arrested over the rape of a woman in Central Park. They were innocent. In 2015 he launched his campaign for the presidency by calling Mexicans “rapists”; he also suggested a judge of Mexican descent would not treat him fairly.

As president, Trump referred to white supremacists as “very fine people” and criticised black NFL players protesting against racial injustice. His first pardon was of Sheriff Joe Arpaio, who targeted Latino people. He has no African Americans on his senior staff.

Trump has also tried to pass a ban on travel to the US from various Muslim-majority countries, which a judge said was a continuation of his “promise to exclude Muslims from the United States”.

The comment about other nations was reportedly made during a bipartisan meeting aimed at finding a deal for Dreamers, young people without legal immigration status. The Daca program is due to be scrapped in early March. Hopes of a deal are unravelling.

After the meeting, Democratic senator Dick Durbin said Trump made repeated “hate-filled, vile and racist” remarks and said he would prefer immigrants from Norway. Lindsey Graham, a Republican, said that was “basically accurate”.

Two other Republicans, David Perdue and Tom Cotton, said they did not “recall the president saying those comments specifically”. Two days later, Perdue described reports Trump used the word as a “gross misrepresentation” and said Durbin and Graham were mistaken.

On Sunday, Trump, said: “Did you see what various senators in the room said about my comments? They weren’t made.”

On Monday he tweeted: “Senator Dicky Durbin totally misrepresented what was said at the DACA meeting. Deals can’t get made when there is no trust! Durbin blew DACA and is hurting our Military.”

Durbin told reporters “I stand behind every word that I said”; his spokesman tweeted that the senator was “focused on building additional support for the only bipartisan immigration deal in Congress”.

Erick Erickson, a conservative pundit, tweeted: “It’s weird that people in the room don’t remember Trump using that word when Trump himself was calling friends to brag about it afterwards. I spoke to one of those friends. The president thought it would play well with the base …”

Josh Dawsey, a Washington Post reporter, tweeted: “White House official told me there is debate internally on whether Trump said ‘shithole’ or ‘shithouse’. Perdue and Cotton seem to have heard latter, this person said, and are using to deny.”