Source: Two More Acts of 2020 Gazetted and Now in Force – The Zimbabwean 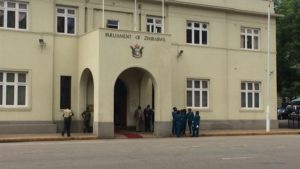 The National Assembly Sat Last Week and Will Continue This Week

The Senate is Due to Resume on Tuesday 15th September

Two Acts were published in the Government Gazette dated Friday 4th September, which is the date of commencement of both Acts:

This Act provides for the rights and benefits of veterans of the Liberation Struggle.  It repeals and replaces the War Veterans Act and the Ex-Political Prisoners, Detainees and Restrictees Act, but provides for benefits awarded under those Acts to continue to be paid and for the continued validity of regulations made under those Acts until they are amended or repealed under the new Act.

This Act provides for the completion of the next national census by 1st July 2021 instead of at least a year later.  The object of is to ensure that the census results will be taken into account, as required by the Constitution, for the new delimitation of that is essential for the purposes of the 2023 harmonised elections.

The National Assembly met on Tuesday 25th August, the date to which it had previously adjourned.  As administrative arrangements for the resumption of business were incomplete, the sitting lasted for only three minutes.  Nevertheless, the opportunity was taken to deal with two items before the House adjourned until Tuesday 1st September:

Hon Esther Nyathi was sworn in by the Clerk of Parliament.  Her appointment as an MP with effect from 31st July 2020 had previously been announced by the Zimbabwe Electoral Commission [ZEC] in the Government Gazette [GN 2079/2020 of 31st July [link] in terms of section 39 of the Electoral Act].

Hon Nyathi fills the vacancy caused by the death of the late Hon Alice Ndlovu, a ZANU PF party-list MP for Matabeleland North.  As the vacant seat was a party-list seat, not a constituency seat, no by-election was necessary, and it fell to ZANU PF to nominate Hon Nyathi for appointed by ZEC.

Deputy Speaker Hon Tsitsi Gezi announced the receipt of non-adverse reports from the PLC on:

The non-adverse report means that the Second Reading stage of this Bill can now start.  The Minister of Justice, Legal and Parliamentary Affairs has already said the Government wants this important – but controversial – Bill be passed by Parliament before the end of the current Parliamentary session. The relevant Parliamentary committees held public consultations on the Bill in July, having previously invited written submissions for consideration by the committees.  It is known that the Bill was severely criticised during the consultations and in the written submissions, so the committees’ report on the Bill is awaited with interest.  The report will be presented to the House after the responsible Minister’s introductory Second Reading speech.

NPRC Annual Reports for 2018 and 2019 tabled and presented

On 1st September Vice-President Mohadi tabled the Annual Reports of the National Peace and Reconciliation Commission [NPRC] for 2018 and 2019.  On Thursday 3rd September he moved motions for the House to take note of both reports and there was some debate on both motions before the House adjourned until 8th September.  Both reports are available on the Veritas website – 2018 here [link] and 2019 here [link].

Cabinet, at its meeting on 4th August, adopted both reports and decided to implement the NPRC’s recommendations for changes to both policy and existing legislation [see the official post-Cabinet briefing document [link] released after that meeting].  Bill Watch 54/2020 [link] critiqued these recommendations as summarised by Cabinet, and also noted that these reports were long overdue for submission to Parliament.

The report of the Portfolio Committee on Justice, Legal and Parliamentary Affairs on its public consultations on the Bill was presented and individual members made their contributions.  The Minister responded to questions raised and went into detail on the need for the clause making the Attorney-General’s legal opinions binding on the Executive and why law officers in Ministries should come under the Attorney-General.  He asked MPs to approve the Bill without amendment, and the House complied, giving the Bill its Second Reading.  It then went to Committee Stage and on to it Third [final]  Reading without any further debate.  The Bill will now be considered by the Senate when it sits again from 15th September, so it seems likely to be completed by end of the current Parliamentary session.  See Veritas’ comments on this Bill in Bill Watch 35/2020 of 13th June [link].

On Tuesday 1st September, the Portfolio Committee on Justice, Legal and Parliamentary Affairs’ report on its public consultations on this Bill was presented and individual MPs made their contributions.  The Minister responded to points raised and the Bill was given its Second Reading.  The House then adjourned after technological difficulties over participation in the proceedings by members not physically present.  The House did not return to the Bill for the rest of last week, so the Committee Stage is listed for this week.  See Veritas’ comments on this Bill in Bill Watch 40/2020 of 27th June [link].

On Thursday 3rd September, the Minister of Finance and Economic Development responded to points made during the debate on the Mid-Term Fiscal Policy Review Statement of 16th July, and the House duly passed the Minister’s related motion seeking the leave of the House to present a Finance Bill.  The Minister then presented the Finance Bill [link] and the Bill was given its First Reading and referred to the Parliamentary Legal Committee [PLC] for its report on the Bill’s constitutionality.  The Bill, which was gazetted on 28th August, deals with changes to the Finance Act, Income Tax Act and Capital Gains Act arising from proposals in the Policy Review  such as the raising of the tax-free threshold to ZWL$ 5000 and the widening of the income tax bands.

Standing Orders reserve Wednesday afternoons for Private Members’ business [Question Time and Motions by Backbenchers].  After several announcements by the Speaker, Wednesday’s sitting, which lasted until 4.45 pm, was devoted to Question Time and one motion.

The receipt of petitions and their referral to the appropriate portfolio committees, from:

o   Parents of Handicapped Children seeking Parliament’s support for free or subsidised medication for children suffering from epilepsy [referred to the Health and Child Care committee].

o   Deaf Zimbabwe Trust asking Parliament to align section 192 of the Criminal Procedure and Evidence Act with the Constitution and also to incorporate the UN Convention on the Rights of People with Disabilities into the law of Zimbabwe [referred to the Justice, Legal and Parliamentary Affairs committee].  [Note: Section 192 of the CPE Act deals with the trial of mentally disordered or defective persons.]

o   Women’s Institute of Development asking Parliament to engage with Government on the Bulawayo water crisis [referred to the committees on Land, Agriculture, Water and Rural Resettlement, and Local Government and Public Works.

An update on Parliament and COVID-19

o   The MPs and staff members who had tested positive had recovered and were doing well.

o   The Administration of Parliament is arranging for MPs and staff to be tested approximately every two weeks.

o   Parliamentary staff is working to resolve technical problems experienced by MPs with measures to allow virtual participation in debate in the chamber from various points in Parliament building [only 50 individuals are allowed to be in the National Assembly chamber at any one time].

The Deputy Minister of Finance and Economic Development, in answering a question about whether subsidised maize meal is reaching the intended beneficiaries, said Silo Industries is the only miller producing subsidised maize meal, and declined to discuss its distribution, saying that is the responsibility of the Ministry of Industry and Commerce.

Likely to Come Up This Week in the National Assembly

Government motions to be presented by the Minister of Justice, Legal and Parliamentary Affairs make up the first three items on the Order Paper for Tuesday 8th September:

Note: In terms of the Constitution both reports should have been presented to Parliament by the end of March 2020.

Next come Bills, in the following order:

This Bill has been waiting for its Committee Stage for a long time.  Minister Mutsvangwa has given notice that she will be asking the House to approve major amendments to the Bill.  For the full text of the amendments see the Veritas website here [link].

Note:  The previous Media Fund, also administered by the Commission, was established by the Access to Information and Protection of Privacy Act [AIPPA], which was repealed by the new Freedom of Information Act with effect from 1st July 2020 without provision for its continuation in existence.

This Bill is also for the Committee Stage.  No amendments have so far been proposed by the Minister, the portfolio committee or individual MPs.