THE United Bulawayo Hospital (UBH) is still stuck with three charred bodies of victims from the Brooklyn bus explosion as they are still to be identified, amid reports that more ashes believed to be human remains were recently brought from the accident scene to the health institution. 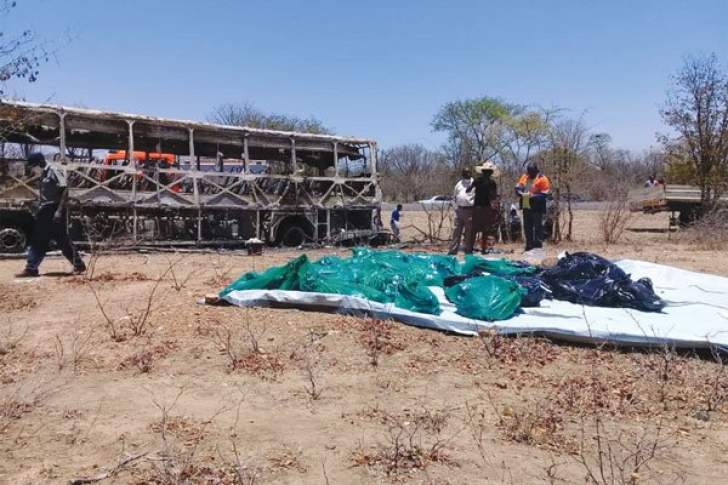 The accident occurred at the 181km peg along the Bulawayo-Beitbridge Road two months ago, and is suspected to have been caused by a gas cylinder explosion.

The bus was travelling from Zvishavane to Musina in South Africa.

Thirty-three people died in the inferno — 32 on the spot — and 30 of them were burnt beyond recognition, while 27 others had serious injuries.

The Zimbabwe Republic Police released names of 27 of the 30 victims who died two months ago in the West Nicholson disaster, Gwanda district.

The arrival of the ashes two weeks ago raised speculation that people who were burnt to ashes in the inferno could be more than 30, as reported by the authorities.

A source based at the health institution said two weeks ago that more ashes were brought to the morgue for identification.

National University of Science and Technology (Nust)’s Applied Genetic Testing Centre (AGTC) director Zephaniah Dhlamini yesterday said there was a set of families who came forward to provide DNA sample services and were still to do the sample testing.

“We have a set of families which came forward to provide DNA samples and we are still to do the testing. As for the bodies, I can’t tell you whether they are still at the morgue, that is for the hospital to do,” Dhlamini said.

“I can’t comment much on the issue, as I was on leave. We were keeping the bodies for the provincial medical director (PMD) Matabeleland South. For further inquiries, you can get in contact with her,” Ndlovu said.

Matabeleland South PMD Rudo Chikodzore said she was busy and would only comment after hours.

The remains of the three victims are unidentified, as relatives were yet to approach officials and provide DNA samples to enable identification.