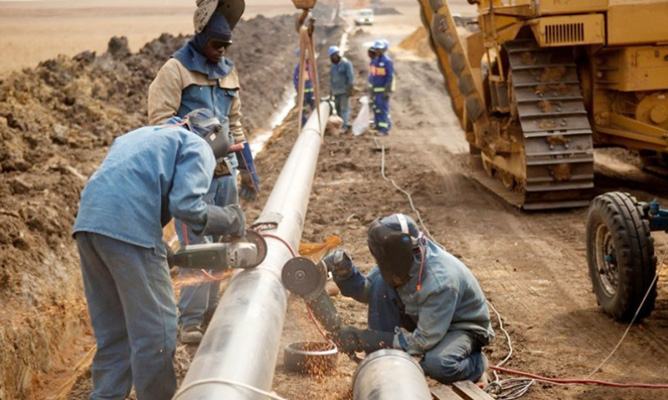 For 600 kilometres, the pipeline, with an estimated capacity to pump 400 million litres per month, will run alongside an existing two billion litres-a-year facility.

Official data shows that Zimbabwe imports about 1,1billion litres of fuel a year, which demonstrates that there already exists extra capacity in the present transnational pipeline.

If government takes 50% equity in the deal, US$650 million of taxpayer funds will be expended on the project, which may be nothing but another scheme to enrich the usual looters whose fortunes cascade across sectors. If the regime is determined to rebuild the economy, it must steer clear and invite private capital to develop and run the pipeline.

After all, the ongoing privatisation drive and the gospel being preached by President Emmerson Mnangagwa’s regime speaks to the importance of a private sector-led economy.

This capital flight explains why Zimbabwe has failed to recover since relapsing into economic chaos 21 years ago.

The 1992 drought, which rattled the country 12 years into independence, was a stern reminder of how badly Zimbabwe requires the MZWP. But once the rains returned in 1993, the regime buried its head under the sand. The strategy has been to use MZWP to win votes. But many people are aware that big shots in Zimbabwe’s regime have been pushing for this oil pipeline.

The announcement last month was the culmination of strenuous behind -the scenes moves by a block of selfish oligarchs to achieve selfish self-interests.The looters are aware that projects of this magnitude may not attract real private sector interests, with Zimbabwe’s soiled brand and the instability that permeates the pipeline’s planned path. Their option was to drag government, persuade it to expend tax payer funds and helpthem make profits.

This is how the government has found itself into this no so important deal. Surely, it is an insult for the people of Matabeleland to boast about an oil pipeline, when they face their most difficult years.

The insult becomes severe after considering that big shots pushing for the deal have been sitting on a life changing project.

The people of Matabeleland should feel the pain even more when they realise that the regime has capacity to raise funding for MZWP and extricate them out of the present crisis.

By prioritising the oil pipeline, government has shown its true colours — it wants to exploit the poor.