Country is viewed as a strategic location for spreading Chinese influence. 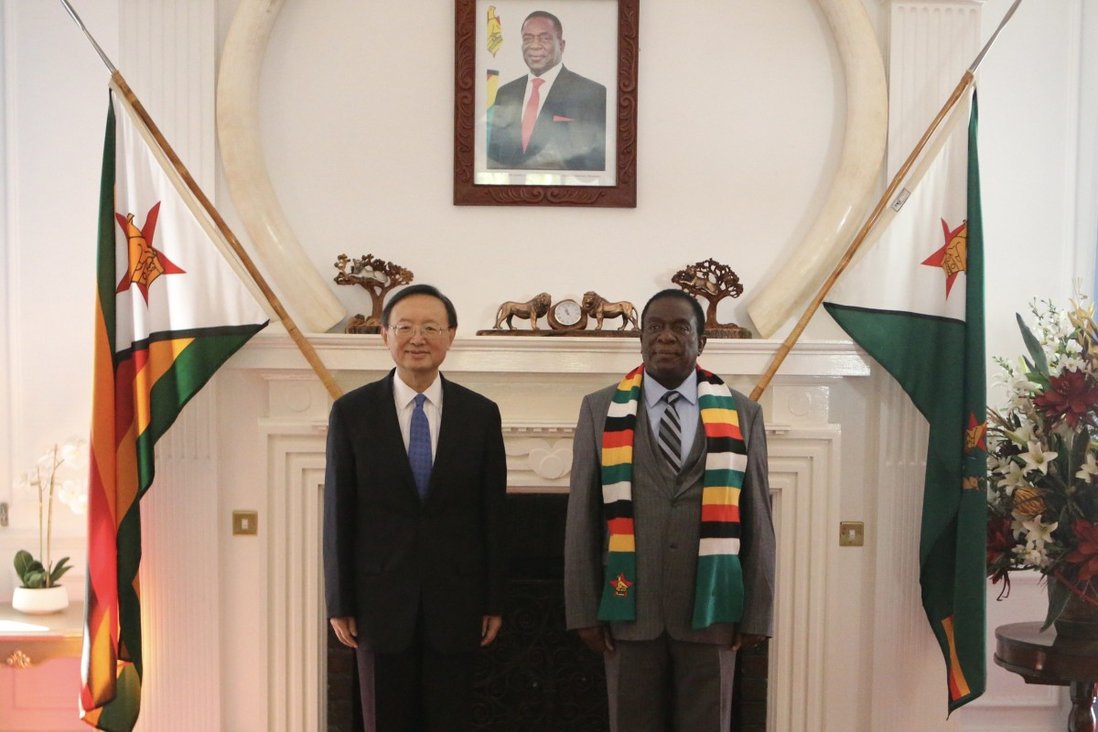 A trip to Harare this month by China’s top diplomat has underscored the importance of Beijing’s relationship with Zimbabwe, its firmest economic and diplomatic ally in Africa.

Zimbabwe has been cut off from global capital markets in the two decades since the United States and some other Western nations imposed sanctions on Harare over human rights violations and the seizure of land from white farmers, leaving Beijing as the main financier of infrastructure projects such as hydroelectric dams, airports and roads.

Observers say China sees Zimbabwe as a key strategic location in southern Africa to spread its influence, with the government in Harare having consistently supported China in international forums.

Politburo member Yang Jiechi, China’s top diplomat, said in Harare early this month that Beijing appreciates Zimbabwe’s important role in promoting China-Africa cooperation on the Belt and Road Initiative and “stands ready to further strengthen all-dimensional exchanges with Zimbabwe, be it party to party, government to government, military to military or people to people”.

China prepares to give US$140 million parliament building to Zimbabwe

China prepares to give US$140 million parliament building to Zimbabwe

China provided arms and training to the guerillas of the Zimbabwe African National Liberation Army during the armed struggle that toppled the country’s white minority government in 1980. Zimbabwean President Emmerson Mnangagwa, who took over from Robert Mugabe following a coup d’etat in 2017, was among those trained by Beijing.

The Mugabe administration’s move to seize land from white farmers was meant to redress colonial-era land grabs but contributed to the country’s economic decline and ruined relations with the West, with sanctions forcing Mugabe to adopt a “look East policy”.

Zimbabwe, which has an external debt of US$14.4 billion, is heavily indebted to China, the only major economy willing to extend loans to the nation due to its poor repayment record. According to the Chinese Loans Database at Boston University’s Global Development Policy Centre, China advanced 30 loans worth a total of US$3 billion to Zimbabwe between 2000 and 2020, with most of the money going to fund power projects, information and communications technology, transport and defence.

He said most of the Chinese loans to Zimbabwe are secured by minerals and natural resources including diamonds, chromite, platinum, coal and tobacco.

“China is deploying this resource-for-infrastructure model not just as a risk-rationing strategy but also as part of its geopolitical manoeuvring in global governance,” said Moyo, now director of the Public Policy and Research Institute of Zimbabwe, an independent think tank.

“As long as Zimbabwe owes China, it will have to stand with Beijing in all big global matters. This is the reason why Chinese loans will continue to flow to Harare even if Zimbabwe is a bad debtor.”

“Zimbabwe is desperate for capital,” he said. “Its doors to global capital markets are shut because of its junk status. Both traditional bilateral and multilateral creditors and lenders have long ceased providing loans to it because of its failure to service its arrears.

“China is therefore the only major lender available to Harare. In this context, Beijing is the deal maker and Harare is the deal taker.”

At a meeting in Harare on July 3, Mnangagwa told Yang that if China had not vetoed a push by Western powers for the United Nations to punish Zimbabwe over the land reforms that evicted white farmers, the country could have been destroyed.

“This speaks volumes of the solid relations between Zimbabwe and China,” Mnangagwa said after the meeting. “In 2008, when the Western countries, the Americans and the British and their allies, wanted to invoke the United Nations Charter which [would have] allowed them to invade Zimbabwe, the Chinese exercised their veto. This is why we are still here and remain independent, so these are solid friends of Zimbabwe.”

Mnangagwa listed several big projects that have been funded by China and built by Chinese companies, including the US$533 million refurbishment of Kariba South power station, Zimbabwe’s largest hydropower plant.

He said China also funded the upgrading of the Hwange 7 and 8 thermal power plants at an estimated cost of US$1.2 billion. The Chinese embassy in Harare said the Hwange expansion project is 88 per cent complete and is expected to add 600 megawatts to Zimbabwe’s national grid.

Tsingshan Group, through subsidiary Dinson Iron and Steel, is spending an estimated US$1 billion to build an iron ore mine and carbon steel plant capable of producing 2 million tonnes a year in Manhize, Mvuma – south of Harare – that will be the biggest steel plant in southern Africa.

There have also been recent Chinese acquisitions in the mining industry, especially for lithium, an essential raw material for the lithium-ion batteries that power electric vehicles.

China’s Zhejiang Huayou Cobalt acquired the Arcadia hard-rock lithium mine outside Harare for US$422 million in December, and state-run China Nonferrous Metal Mining Group announced in February that it was also acquiring a lithium project in Zimbabwe.

“The fact that Zimbabwe’s relations with the West have deteriorated in recent years makes it even easier for China to strengthen ties with Harare,” Shinn said.

In 2017, China played an important role in managing the political transition from Mugabe to Mnangagwa, Shinn said. He said China has also found Zimbabwe to be a helpful partner in improving facial recognition technology.

“Because of concerns about Zimbabwe’s ability to manage debt, however, China seems to be pulling back from major new loans to the country,” he said.

Stephen Chan, professor of politics and international relations at the School of Oriental and African Studies in London, said that on a trip to Beijing some years ago his Chinese hosts admitted to him that they saw Zimbabwe as an economic basket case.

“It’s gotten much worse economically since then,” Chan said. “But China sees Zimbabwe as the key strategic location in southern Africa for spreading its influence further.”

He said there is no serious or sustained US resistance to Chinese activity in Zimbabwe, whereas there would be in Zambia or South Africa, but “it was also hinted to me that, these things notwithstanding, the Chinese would like to see a more responsible government”.

“They worry about their investment being wasted or squandered,” Chan said. “Hence most of the big infrastructure projects are fully managed and staffed by Chinese.”