‘We will teach ‘noisemakers’ a lesson’ 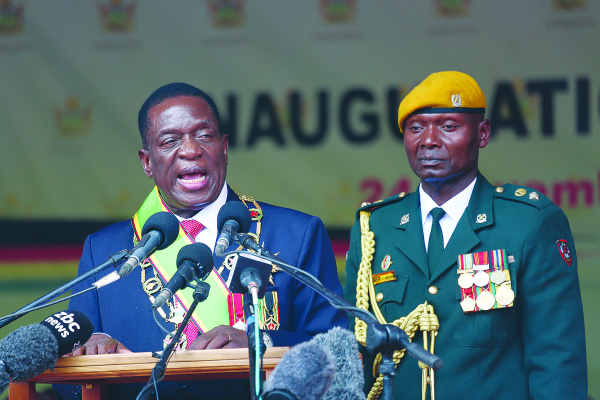 President Emmerson Mnangagwa yesterday declared Zanu PF was confident of a resounding victory in this month’s polls and was already rolling out its post-election programme.

President Emmerson Mnangagwa yesterday declared Zanu PF was confident of a resounding victory in this month’s polls and was already rolling out its post-election programme.

Addressing thousands of party supporters in Chinhoyi, Mnangagwa scoffed at “noisy little opposition parties”, saying these would not cause him sleepless nights as he was assured of victory.

“We are here (government) to stay. We are not going anywhere after the elections as we are going to win resoundingly.
We are not worried about those who make noise in newspapers, but we are going to teach them a lesson,” he said.

“We are going to win through the ballot and we want our people to warmly receive election observers.”

He chided the Nelson Chamisa-led MDC Alliance for organising demonstrations against the Zimbabwe Electoral Commission (Zec), saying: “While others are planning demonstrations, Zanu PF is planning development. Dreamers are allowed.
”
The Zanu PF leader also took a jibe at former First Lady Grace Mugabe, equating her to the biblical Delilah who deceived Samson into shaving off his hair, but ended on the losing side.

He also warned that the net was closing in on land barons preying on desperate home seekers.

“The net is getting closer to the land barons who fleeced people of their hard-earned money promising residential stand that were not there.

“I now have the report with me including their names and who did what. Just wait and see. We will expose them.”
Mnangagwa assured white commercial farmers that they would soon get 99-year land leases and pledged to donate solar geysers to traditional leaders.