Will Zimbabwe be prepared if it suffers a major outbreak of Covid-19?

Source: Will Zimbabwe be prepared if it suffers a major outbreak of Covid-19? | America Magazine 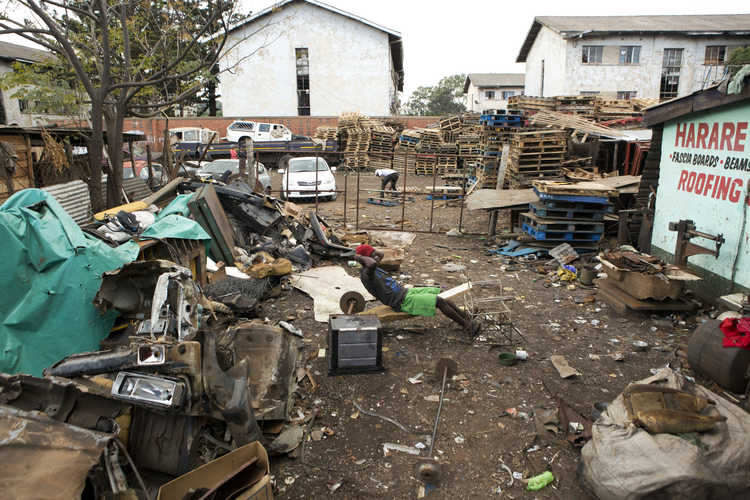 A man does exercises in a scrap yard, during lockdown due to the coronavirus, in Harare, Zimbabwe, Wednesday, April 8, 2020. (AP Photo/Tsvangirayi Mukwazhi)

As reports of new infections and deaths because of Covid-19 trickle in and the nation continues a broad lockdown, Zimbabwe is facing its worst economic crisis in more than a decade. Regional economic analysts say there is nothing that points to relief in the short term. International medical researchers are racing to find a vaccine to the coronavirus, and poorly resourced African countries such as Zimbabwe can only pray that a breakthrough comes soon.

The Zimbabwe Association of Doctors for Human Rights raised an alarm about the lack of government preparation and the absence of testing for coronavirus on April 7. In countries with more efficient health-delivery systems, a quick turnaround of Covid-19 tests has been credited with saving lives.

But in a country of 14.5 million people, Zimbabwe had only one testing center, located in the capital, Harare, until one was established in Bulawayo, the nation’s second city, on April 12. That means blood samples of suspected Covid-19 cases from across the country were being sent to the capital across the country’s inadequate road system.

Government doctors have already gone on strike to protest the lack of personal protective equipment, and other life-saving equipment like ventilators are difficult to find in government hospitals.

Zimbabwe authorities instituted a 21-day national lockdown on March 30 to reduce public transmission of the coronavirus. That measure was always going to be difficult to enforce in a country where labor unions have said as much as 90 percent of the population do not have jobs in the formal economy.

Effie Ncube is a human rights defender and coordinator of Citizens Covid-19 Monitor, an initiative launched by residents in Bulawayo to address the pandemic. “Government failed us, as the country had ample time to put countermeasures [in place],” he told America.

Owing to the lack of food security and access to tap water in the majority of Zimbabwe’s households, “the lockdown itself was going to be extremely difficult to enforce,” Mr. Ncube said. “People cannot sit in their homes without ‘mealie meal,’” he added, referring to an easy-to-prepare porridge that is a staple of the Zimbabwe diet.

The majority of Zimbabwe’s poor subsist in the informal sector where incomes are not guaranteed. It was no surprise when the lockdown was violated countrywide, provoking acts of police and military brutality.

“Zimbabwe’s response to Covid-19 has been sloppy,” said Dewa Mavhinga, the southern Africa director for Human Rights Watch. He pointed out in an interview conducted over email that the Zimbabwe Association of Doctors for Human Rights had to go to court for an order “compelling the government to provide health workers in all public hospitals with personal protective equipment and adequately equip public hospitals to combat the Covid-19 outbreak.”

The majority of Zimbabwe’s poor subsist in the informal sector where incomes are not guaranteed. It was no surprise when the lockdown was violated countrywide, provoking acts of police and military brutality.

“The heavy-handed enforcement of the lockdown by the police and army raises questions on whether the government is fully aware of the adverse impacts of its Covid-19 response on food security,” he added. Violations of the lockdown have continued across the country as people leave their homes to look for food even as Zimbabwe’s president pondered whether or not to follow other southern African neighbors that extended their national lockdowns.

In a statement defending the government’s preparations for a potential Covid-19 outbreak, Vice President Kembo Mohadi, chair of Zimbabwe’s ad hoc committee on Covid-19, suggested U.S. sanctions first instituted in 2003 were hampering the government’s response. “As you know, we are under sanctions, and we don’t have everything that is required,” Mr. Mohadi said.

In 2008, Zimbabwe endured world-record hyperinflation—the World Bank describing Zimbabwe’s rate as something rarely seen in a country not at war. Because of its dilapidated infrastructure and a poorly funded health service that regularly features walkouts by doctors and nurses, locals have for years known that they cannot afford to get sick. Even death itself seems beyond the reach of many in Zimbabwe because a coffin can cost anything above $200 (U.S.), more than a teacher’s monthly salary.

“Zimbabwe has experienced a gradual recession that has led to the closing of industries and companies, foreign investor flight [and] job losses, leading to an escalation of poverty,” the Zimbabwe Catholic Bishops’ Conference noted in a pastoral letter released on April 2.

Because of its dilapidated infrastructure and a poorly funded health service that regularly features walkouts by doctors and nurses, locals have for years known that they cannot afford to get sick.

“Now with Covid-19 there is need for outright and vigorous efforts to fight and prevent this pandemic, which if it is not carefully handled in our country, may spell doom to the whole of our nation, where hospital structures are not fully equipped and ready to combat it,” the bishops said. “Our only line of defense is prevention. Let us be active and save lives.”

Covid-19 has only reminded citizens just how bad things are in Zimbabwe three years after the fall of its longtime strongman Robert Mugabe, ousted in a coup in 2017 after 37 years in power. The late president had been widely blamed for ruining what was once considered one of Africa’s brightest economic hopes.

President Emmerson Mnangagwa took over in 2017 with the promise of undoing Mugabe’s poor economic and human rights record, issuing lofty pronouncements about turning the country into a middle-class economy by 2030.

Critics have by now dismissed those ambitions as mere populism. Little has been achieved toward that goal of rapid economic transformation. Zimbabwe’s Catholic bishops have joined other civil society actors alleging that rights abuses have escalated under the new administration. Its human rights record so far has not helped efforts to attract international investors, Brian Nichols, the United States ambassador to Zimbabwe, said in a recent statement.

As if following the script of Mugabe’s misrule, the current administration is failing to pay government workers, allowing poverty levels to spike and tolerating human rights abuses. The sometimes violent methods used to enforce the coronavirus lockdown have only reminded citizens of the police brutality normalized during the Mugabe years.

Government officials were already aware of simmering public anger because of economic hardships accelerated by the crisis—a loaf of bread that last year cost $1.45 in Zimbabwean dollars commanded as much as $34 last week. Its decision to lock down the population may have had as much to do with containing public anger as limiting the spread of the coronavirus.

“We are already dying of hunger. How can we be afraid of coronavirus?”

But in a March report, the Zimbabwe Peace Project, a human rights nongovernment organization, said there was an escalation of rights abuses soon after the lockdown was announced.

The project recorded a total of 145 human rights violations during the month of March alone. “These included Covid-19 related violations, intimidation and harassment, [and] discrimination, among others,” the report said.

Amid the gloom, Mater Dei Hospital, established by Franciscan nuns in 1953 in Bulawayo, was identified by well wishers, including the former education minister David Coltart, as the only institution that had the capacity to deal with coronavirus cases.

Catholic hospitals have been on the forefront of health delivery in Zimbabwe since even before the country’s independence in 1980; Covid-19 seemed to serve a reminder of the work being done by faith-based health institutions.

Campaigners were quick to mobilize funds locally and abroad for Mater Dei Hospital to serve the city of Bulawayo when, according to city health officials, the Zimbabwe central government was failing to upgrade its own hospitals in readiness for an anticipated wave of Covid-19 patients.

“We are already dying of hunger. How can we be afraid of coronavirus?” complained Gilbert Siziba, a Bulawayo resident, echoing the sentiment of many residents who have continued to breach the lockdown and left their homes to find food and to earn a living.

Bad as it is, Covid-19 is not the only hardship facing Zimbabweans. An ongoing drought has depleted reservoirs so badly that the municipal government in Bulawayo announced it would be extending a program to conserve water by reducing access. Some communities around the city will have to brace for up to eight months cut off from the municipal water supply.

“How can they do this to us in the middle of coronavirus? Have they not told us to wash our hands regularly as a way to avoid contracting the virus?” asked Jane Shambare, a housewife and mother of three. According to Bulawayo’s mayor, Solomon Mguni, the city council has asked the central government to declare the water crisis a national disaster, a designation that would unlock government funds to help address the issue. Mr. Mguni said city officials have so far received no response.

Without having first dealt with these and so many other underlying public health concerns, said Mr. Ncube, it remains unclear how the national government will be able to respond to a pandemic spreading across Bulawayo, a city of two million, and other high-density communities across Zimbabwe.