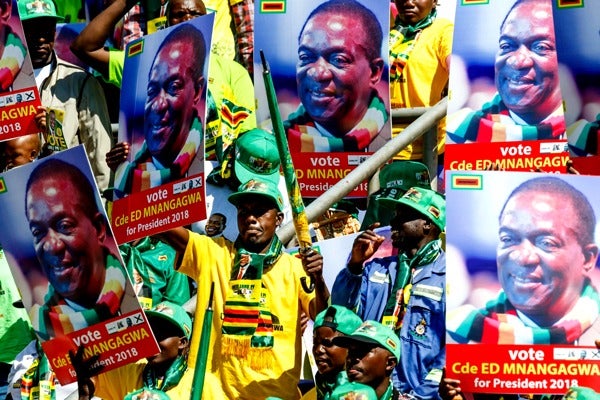 Mugidho, who was moving around with a truckload of party supporters, disrupted the distribution process until it was abandoned. The team maintained vigilance, tracking the truck ferrying mealie-meal. This forced the mealie-meal to be distributed at night.

Mugidho confirmed the clashes and vowed to continue disrupting the process as long as the Zanu PF leadership was running it.

“Yes, we forced the distribution to be abandoned after we realised that it was only meant for Zanu PF supporters,” Mugidho said.

“They had to distribute at night because they were afraid of my team which was monitoring the whole process. I called the district development co-ordinator (DDC), Lovemore Chisema, complaining about the procedure.”

Mugidho added: “I am happy he said everything is now reversed. Everyone is under the lockdown and is in need of food. Why should it be a Zanu PF project? COVID-19 affects everyone. So for the President’s decree to be respected, all people should be accorded a chance to buy mealie-meal during the 21-day lockdown.”

Chisema admitted that he received reports that mealie-meal was distributed at night and said his office regretted what transpired and added that he had resolved that there would be a committee which is apolitical, responsible for the distribution of mealie-meal.

“To be frank, I am not happy with what happened yesterday. That was a disaster. The whole thing was chaotic. I thought our leaders were going to show maturity and distribute food to everyone regardless of his or her political affiliation.

“Our main aim was to reduce movement and crowds during the lockdown as a measure to curb the novel coronavirus. I regret everything that happened. We have now given the mandate to councillors and the committees they are going to work with,” Chisema said.

But Chiredzi MP Farai Musikavanhu went on to send a letter to his Zanu PF groups insisting that ruling party officials will remain in charge of mealie-meal distribution.

“Further to a resolution arising from a meeting held on March 30, 2020 and chaired by the DDC all four constituency MPs in Chiredzi district were mandated to be responsible for administering mealie-meal distribution at ward level in a drive to decongest selling points in Chiredzi town as part of the ongoing fight against the coronavirus pandemic,” part of the letter dated April 2 read.

“Yesterday April 1, 2020, we launched the Chiredzi West constituency ward-based mealie-meal distribution programme: The MP’s admin team distributed mealie-meal to 347 residents at no transport cost to the beneficiaries: Ward 5: 100, Ward 6: 65, Ward 7: 62 Ward 8: 120. Each person got 10kg mealie at the gazetted price of ZW$70.”

The message further read: “The admin team was supported by the mealie-meal taskforce. The number of beneficiaries per ward was calculated by the MP based on statistics from (Zimbabwe Electoral Commission) ZEC and the available mealie-meal of 1 500 x 10kg bags.

Musikavanhu listed several wards which he said had not received the staple food, citing teething problems experienced on the first day of the lockdown (Monday) in the distribution of mealie-meal where soldiers were involved in running battles with residents at
N Richards Wholesalers.

He said the decision to distribute the mealie-meal at ward level was meant to decongest the major outlets in Chiredzi to avoid the spread of the deadly coronavirus and ensure the success of the national lockdown proclaimed by President Emmerson Mnangagwa on Friday last week.

“Government food programmes will not be politicised and all forms of discrimination shall not be tolerated,” Musikavanhu said, urging each ward to set up a five-member mealie-meal distribution committee. Membership shall be drawn from the following categories: veterans of the liberation struggle, pastors, social welfare workers, health workers and educationists,” he said.

He implored the ward leadership to exercise maturity in ensuring that the selection of committee members was not politicised, advising wards to forward names of their committee members to the constituency manager Alphios Mugari by end of day today.