ACTING Prosecutor-General Kumbirai Hodzi has turned down a request by Tendai Biti, an opposition party legislator, seeking the temporary release of his passport to allow him to travel to Uganda to attend a crucial continental meeting convened by the African Organisation of Public Accounts Committees (AFROPAC). 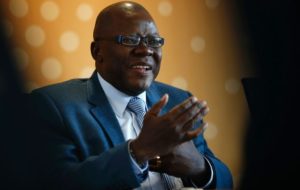 Biti, the legislator for Harare East constituency had through his lawyer Beatrice Mtetwa written to Hodzi applying for the release of his passport to allow him to attend AFROPAC’s 3rd General Meeting and Conference in the Ugandan capital city of Kampala, running from Monday 19 November 2018 to Friday 23 November 2018.

The Clerk of Court at Harare Magistrates Court is currently holding Biti’s passport as part of his bail conditions in a matter in which he was arrested in August 2018 and charged with contravening the country’s electoral laws.

The request for the release of the passport came after AFROPAC invited Biti to attend the meeting and conference in his capacity as Chairperson of the Zimbabwean Parliament’s Public Accounts Committee to which Kennedy Chokuda, the Clerk of Parliament formally accepted the invitation and communicated the list of legislators who would be attending to the Secretary-General of AFROPAC.
As Chairperson of the Public Accounts Committee, Biti will be the leader of the Zimbabwean delegation of legislators attending the AFROPAC meeting and conference.

Mtetwa said as a former Finance Minister during the coalition government, Biti’s attendance at such a crucial continental meeting would be valuable to the Public Accounts Committee that he chairs and would compliment government’s position to zero tolerance for corruption, lack of accountability by public officials and the profligacy that has generally afflicted public sector spending.

But in response to Biti’s request, Hodzi turned down the MDC-Alliance party legislator’s application for the temporary of his passport on the basis that he is facing criminal charges at Harare Magistrates
Court, where on Monday 12 November 2018 he challenged the suitability of Michael Reza of the National Prosecuting Authority as the lead prosecutor. Harare Magistrate Gloria Takundwa will on Thursday 15 November 2018 hand down her ruling on Biti’s application.

Hodzi claimed that the NPA was keen to afford Biti a fair and public trial within a reasonable time as provided in section 69 of the Constitution and hence the temporary release of his passport would interrupt his trial and is likely to jeopardise the criminal proceedings in his case as he doesn’t know how long it would take to finalise it.