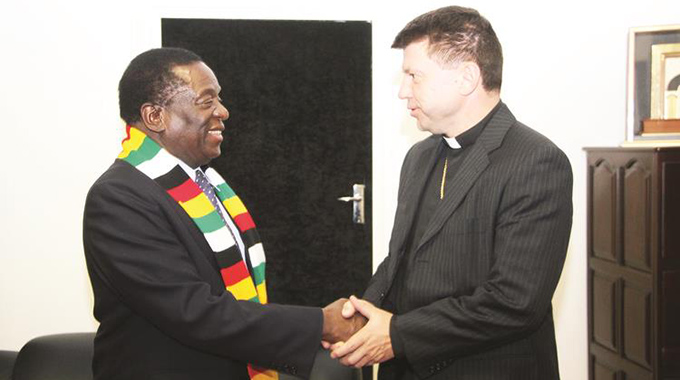 President Mnangagwa welcomes Marek Zalewski, a prelate of the Roman Catholic Church who serves as the Titular Archbishop of Africa and is also the Apostolic Nuncio to Singapore and Non-Residential Pontifical Representative for Vietnam, to his Munhumutapa offices in Harare yesterday. — (Picture by Justin Mutenda)

Zvamaida Murwira Senior Reporter
The Vatican Ambassador to Zimbabwe, Archbishop Marek Zalewski, yesterday described the period leading to the July 30 harmonised elections as peaceful and conducive for a free, fair and credible elections. Archbishop Zalewski said this while briefing journalists soon after paying a courtesy call on President Mnangagwa at his Munhumutapa offices. Archbishop Zalewski is a prelate of the Roman Catholic Church, who serves as the Titular Archbishop of Africa and is also the Apostolic Nuncio to Singapore and Non-Residential Pontifical Representative for Vietnam since May 21, 2014.

He said he was leaving Zimbabwe for Singapore after making a tour of duty in Harare for four years.
“I will not be here on election day because I am leaving tomorrow,” he said. “But politically, I think it is very stable situation except only one incident in Bulawayo. All the electoral process are going on well.

“We have a lot of observers currently present and many more will come. Even without observers we imagine that Zimbabwean people are mature enough, responsible to deal with their election in a proper manner.”

Ambassador Zalewski said the Catholic family and church wished Zimbabweans to exercise their right to vote and use their conscience to choose candidates of their choice.

He described his interaction with the Head of State and Government as friendly.
“As you know, I am the Apostolic Nuncio in Zimbabwe, I have been here exactly four years,” he said. “I came exactly in May 2014. This was a visit to the President of the Republic who received me very friendly. We exchanged few information.

“I invited him to visit the Vatican, the Holy Sea, to meet the Pope, because the Pope is also the Head of State. He thanked me also for the presence of the church because we are engaged in education, schools, universities, small hospitals, clinics. They assist thousands of women, sick people and the abandoned.”

Archbishop Zalewski said the Catholic Church maintained the confidence it expressed when President Mnangagwa was inaugurated as the Head of State and Government.

“There is still optimism now before an election,” he said. “We are approaching very important moment not only in the political life, but social life for all Zimbabweans. This is the reason why we have to use this opportunity to express our vote, our desire.”