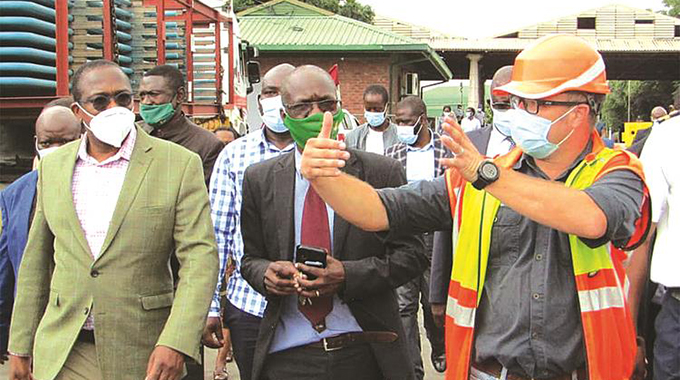 Finance and Economic Development Minister Professor Ncube listens to Mr Herkie Sandenbegh (right), the contract manager for Raubex Construction which is carrying out civil works at Beitbridge Border Post under the US$300 million border modernisation initiative, outlining the scope of the works. — Picture: Thupeyo Muleya

Traffic through Beitbridge will grow five-fold over the next 30 months as economic growth picks up under the National Development Strategy (NDS1), Finance and Economic Development Minister, Professor Mthuli Ncube said yesterday.

Last year, despite national lockdowns across Southern Africa, cargo traffic doubled and the minister said trade facilitation through Beitbridge was expected to move up a gear upon the completion of the current US$300 million modernisation project being implemented by the Zimborders consortium. Under normal circumstances, the border handles close to 40 000 commercial trucks, 100 000 private cars, 4 000 buses, and 500 000 travellers monthly and cargo traffic was rising last year, although there were constraints on the other people-orientated traffic.

In an interview after the tour of the modernisation project, Prof Ncube said the Zimbabwe Revenue Authority (zimra) and other stakeholders had done well in addressing the congestion that was haunting the border post during the festive season.

zimra had increased its revenue collection capacity since the Government is implementing a raft of measures to promote the ease of doing business.

“We are doing a lot to support Zimra, and it is pleasing to note that business has just increased in the last 12 months. If we look at the number of commercial trucks using this border alone, they have just grown by 100 percent,” said Prof Ncube.

“Then we had an additional 40 percent growth in commercial cargo here, due to the closure of the border between Botswana and South Africa. So, the traffic was diverted here, that’s why we had sharp build upon the last few weeks, but that has been contained through a variety of strategies”.

Prof Ncube said zimra had put more staff on the ground to make the movement of cargo seamless.

The weighbridge process for the commercial trucks had been reviewed and was now more efficient. Adoption of the pre-clearance system had also lessened the time goods spend at the border post. The facility involves the declaration and payment of duties before the goods reach a specific port of entry/exit.

“The border modernisation which is on course to completion in the next two and half years will improve the way of doing business here under the One-Stop Border Post concept.

“In addition, customs clearing agents have now been legally included in the essential service providers’ bracket making it possible for them to facilitate regional and international trade on a 24 hours basis,” said Prof Ncube.

The border modernisation will have an overspill effect in Beitbridge town, whose roads and water and sanitation facilities will be upgraded under the same project.

Zimborders will build 200 houses and flats for border officials and upgrade all the necessary ancillary services. Another $2 billion had been allocated to Matabeleland South to fund infrastructure and economic development.

“We have exchanged notes with the Minister Responsible for Devolution in this area (Abednico Ncube) on the importance of accelerating the implementation of the projects in line with the Government thrust.

“As a quick win solution, we have availed $154 million to Beitbridge district to buy graders to be used in maintaining and servicing roads under Beitbridge Municipality, Beitbridge East and West constituencies respectively,” said Prof Ncube.