Zim election isn’t just about who wins, but how it’s won

“Mugabe has gone. Things will never be the same again.” For pretty much the average life expectancy of many Zimbabweans, one man has ruled the country with an iron fist. Eight elections were held during his rule — and every time, that fist ensured victory for Robert Mugabe. 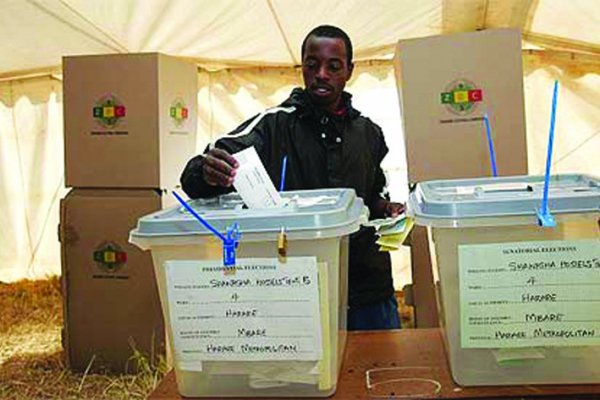 On Monday, Zimbabweans went to the polls to elect his successor. The current President, Emmerson Mnangagwa (75), the man who finally ousted Mugabe in a bloodless coup last November, has also crushed his enemies ruthlessly in the past — but his iron fist lies within a well-padded velvet glove.

Mnangagwa went head-to-head at the polls with Nelson Chamisa (40), who took over as leader of the opposition MDC-T after Morgan Tsvangirai died earlier this year.

Whoever wins this election heralds a new dawn for Zimbabwe. Mugabe has gone. Things will never be the same again. Certainly, Mnangagwa brings a lot of baggage from the Mugabe era — having been the former president’s righthand man. But he is different in many significant ways — on Sunday, Mugabe even urged voters to turn their backs on his leadership, and went so far as to wish Chamisa well. Most importantly, Mnangagwa understands business and is determined to resuscitate Zimbabwe’s moribund economy and give the people what they so desperately want and need — jobs.

He is primarily a soldier, having left Zimbabwe as a teenager in the early 1960s for military training in China. He has fashioned himself after the former communist leader Deng Xiaoping, who modernised China and laid the foundations for the economic powerhouse it has become, while maintaining a strictly authoritarian regime.

Deng abandoned many orthodox communist doctrines to incorporate elements of the free-enterprise system. Mnangagwa seems determined to do the same for Zimbabwe. He is a wealthy man in his own right, having run Zanu PF’s and his own businesses since the early 1980s. He has been mentioned in a United Nations report on the plundering of mining and logging resources in the Democratic Republic of the Congo, together with General Sibusiso Moyo, who is now Foreign Affairs minister.

Over the eight months since he took the reins from Mugabe, Mnangagwa has given clear signals of a clean break with the past — actively courting the west, preaching and practising peace instead of violence, eschewing corruption, meeting business leaders and white farmers, and generally projecting himself as a reformist.

He has met personally the many business missions that have visited the country this year, and has promised to get rid of the cumbersome bureaucracy that currently stifles new investment. He has suspended Mugabe’s populist Indigenisation Act, which required foreigners to cede 51% of their shares to locals (Zanu PF, of course) in all sectors except gold and diamond mining. He has even made it his election slogan — with party supporters everywhere sporting T-shirts proclaiming “Zimbabwe is open for business”.

While Mugabe was a consummate manipulator, skilfully playing people off against each other and weaving a complex web of patronage, Mnangagwa is a much more of a strategist. He will be prepared to make tough decisions that could ultimately benefit the economy. He has certainly been more successful in attracting foreign investment in the short time he has been in power than Mugabe was in decades of berating the west.

The MDC Alliance’s Chamisa is just as pro-business as Mnangagwa, and to his credit has surrounded himself with several capable technocrats. There is no whiff of corruption about him and he has been drawing massive crowds in many rural areas which, under Mugabe, were no-go areas for his party. And, of course, the MDC Alliance’s democratic and human rights credentials are well established — while those of Zanu PF are a constant cause for concern.

Should Chamisa win the election, there is no doubt that the world will welcome Zimbabwe back into the fold with open arms. But Mnangagwa is smart enough to realise that international recognition of his government can only come if this election is acknowledged as free and fair by the global community. While Britain has been unswervingly supportive of the post-Mugabe regime, the United States has reserved judgment — recently renewing its sanctions on Zanu PF leaders and companies, but promising to lift them once credible elections have taken place.

And there’s the rub. Many believe it is impossible for the Zimbabwe Electoral Commission to run a free and fair poll. It is accused of rigging every election since it was established in 2004; it is still staffed largely by the military and Zanu PF loyalists; and it has shown shameful bias towards the ruling party in recent months. For example, the law says the ballot paper should be in alphabetical order, which places Chamisa second on the 23-person list. The commission cleverly formatted the paper into two lop-sided columns, in order to place Mnangagwa at the very top of column two.

So, this election could bring three possible results: if Mnangagwa wins, the MDC Alliance already has enough ammunition against the electoral commission to cry foul. If Chamisa wins convincingly, it will be a new dawn indeed — but the military might not accept this, as the generals have already invested a lot in Mnangagwa.

But if there is no clear winner, the most sensible way forward would be for the two protagonists to agree to a marriage of convenience — otherwise known as a government of national unity.