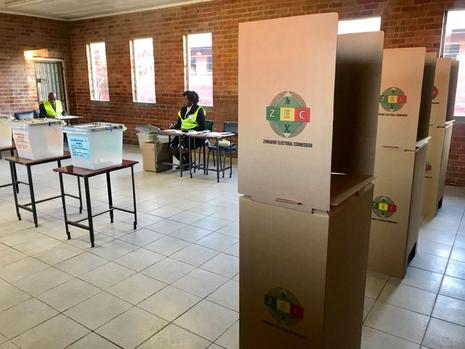 Harare – A humble graveyard assistant employed by his local municipality has beaten a veteran politician in Zimbabwe’s just-ended elections.

In an extraordinary result, a new member of parliament for the opposition MDC Alliance,  who works at a lowly job in a small and bankrupt municipality, has become a member of parliament after winning the vote against one of Zanu-PF’s most senior members, July Moyo.
Moyo, a close associate of newly elected president Emmerson Mnangagwa, was standing for parliament in what was seen as a safe Zanu-PF seat in Redcliff, a small town, far from anywhere, and which has little income as most of its residents were mostly formerly employed at the bankrupt iron and steel plant, ZISCO.
“I am really humbled by the support which I have received from the people of Redcliff who have supported my parliamentary bid. I promise to represent the constituency to the best of my ability,” he told NewZimbabwe.com
“I am coming from the people whom I identify with through their day-to-day struggles. I come from a very humble background. I have class two bricklaying course and I am also a boilermaker.
“People have been referring to me as an undertaker, but I don’t mind as I am helping to give people a dignified exit from the face of the earth compared to some of the leaders who are taking people’s lives by failing to give adequate services,” he said.
The MDC Alliance failed to prevent Zanu-PF from winning a two-thirds majority in parliamentary elections on Monday even though the party’s leader, Nelson Chamisa did so well to gain massive support from traditional Zanu PF constituencies, some of them believed to remain supporters of former president Robert Mugabe.
* Receive IOL’s top stories via Whatsapp by sending your name to 0745573535.
Independent Foreign Service