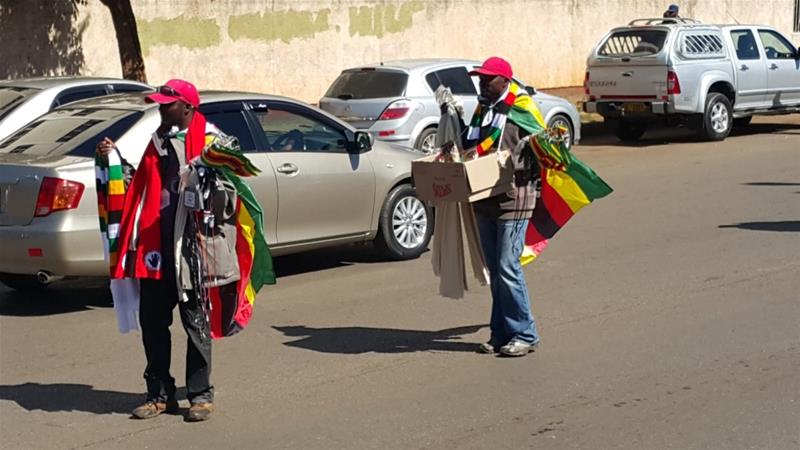 Campaign period has been a welcome relief for some business owners but experts warn good times will not last.

Harare, Zimbabwe – Shine Shapure paces up and down the busy Samora Machel Avenue in downtown Harare.

A Zimbabwean flag is draped over his shoulders, while scarfs in the colours of the country’s two major political parties hang from his arms.

“Election time is a good time for business,” he says, in between trying to sell his wares to drivers and passengers stuck in the slow-moving afternoon traffic.

Shapure, a father of two, has been selling goods on Harare’s jacaranda-lined streets for the past 18 years.

Typically, his merchandise includes matchsticks, keyholders, stickers and water – but not these days.

As Zimbabwe prepares to hold a crucial general election on Monday, Shapure replaced his usual offerings with memorabilia of the ruling ZANU-PF and the main opposition MDC parties.

After weeks of hawking party merchandise, Shapure adapted to his clientele and learned to price his goods accordingly.

“ZANU-PF supporters have more money than MDC’s. They are willing to pay anything. That is why I charge them more,” he says with a smile.

For people like Shapure, as well as small business owners, this is boom time.

Lovemore Mapiro runs a printing business in the Zimbabwean capital. In the lead-up to the hotly contested election, he has been travelling up and down the country delivering orders and taking in new ones from candidates and party.

“MDC people usually buy plenty of stuff at times like this,” says the 34-year-old, shortly after returning from the second city of Bulawayo, where he delivered election-related material to a rally by the party challenging President Emmerson Mnangagwa‘s ZANU-PF.

“They are used to the party being in the bush (political wilderness), so they know they must support their party so it wins. I go to every rally done by MDC, I go everywhere in Zimbabwe as long as there is a rally – I will use my own transport to get there so I can sell my things,” he added.

Mapiro says he now makes $300 a day – more than half of his earnings before the start of the election campaign.

Hotels have also seen a surge in customers amid a growing international interest in the landmark election following last year’s resignation of decades-long President Robert Mugabe in the wake of a military intervention.

The same goes for newspapers and radio stations, whose advertising revenue has shot up as candidates compete to get their message out to voters.

The car rental industry is also among the beneficiaries. At Impala Car rental, one of the largest car hire companies in the country, demand is so high they have run out of vehicles to rent.

“We get a lot of car hires from different NGOs and election observers,” Tracy Ngoma, a manager at the company, told Al Jazeera.

“Comparing business to the past two months, we have seen a rise in our figures, so we know it is from the election season and we hope it will continue like this,” added Ngoma.

In 2009, the landlocked southern African country abandoned its currency amid sky-high inflation. The US dollar is currently the main currency for doing business in the country where a cash shortage is strangling the already hard-pressed businesses.

Last year, Zimbabwe’s Reserve Bank introduced “bond notes” to deal with the dollar shortage. But instead of improving the situation, the notes helped increase the demand for dollars.

But that is now changing, thanks to candidates splashing out to promote their campaigns.

“Before the election, the situation was bad,” says Nelo Kamukore, a black market money exchanger.

“The dollar-to-bond rate is better now thanks to the politicians spending money,” he adds. “The bond is worth more now which means people can buy more with their bonds. I hope it stays the same after the election is over.”

Experts agree that the campaign period has been a welcome relief for the country’s damaged economy – but warn that the good times will not last long.

“The election has been a time for some businesses to make money – there’s lots of money being spent on campaigning and on consumption,” says economist Vince Musewe.

He was quick to add, however, that the current trickle of cash into the economy is not a long-term fix for Zimbabwe’s financial woes

“The money circulating now in the system is not sustainable beyond elections. We have to face the liquidity crisis head-on – whoever wins the election will have to do this to get the country back on track,” added Musewe.

Back at Samora Machel Avenue, Shapure is not looking forward to business as usual after the election season is over.

“I want it to continue,” he says, just as campaigning enters its final stretch.

“It is the only time we make good money.”