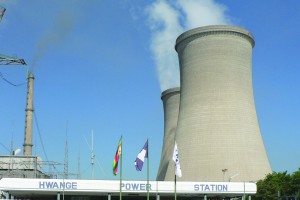 ZIMBABWE has met all conditions for a US$1,17 billion loan facility from the Export Import Bank of China (Exim Bank of China) for the expansion of Hwange Power Station, a Cabinet Minister has revealed.

For almost three years, the country has struggled to meet the stringent conditions set out by the Chinese for the release of the funds, delaying commencement of the project, which will be undertaken by a Chinese contractor, Sino Hydro Corporation, at a cost of about US$1,5 billion.
The country’s largest coal-fired power plant, which has a 920 megawatts (MW) installed capacity, has four 120MW units and two 220MW units.

The expansion project will add two more units with a combined output of 600MW. Hwange Power Station is also the 14th largest thermal power station in the southern Africa region and generates about 40 percent of the country’s electricity.

Under the deal, which was signed in 2014, the Zimbabwe Power Company (ZPC) is to get US$1,17 billion through concessionary funding from Exim Bank of China, while ZPC is to provide the balance.
In the 2018 National Budget, Finance and Economic Planning Minister, Patrick Chinamasa, disclosed that all conditions precedent to the loan disbursement have now been met.

“With regards to the Hwange 7 and 8 expansion project, all conditions precedent have been met, with funding expected to come from Exim Bank of China,” Chinamasa said.

“Once funding is secured, it is anticipated that US$474,9 million will be drawn down, targeting plant civil works, water treatment plant and down payment for electro-mechanical works, of which funding from Exim Bank of China is US$310 million and Hwange Electricity Supply Company (HESCO), a special purpose vehicle established for the expansion project will provide US$165 million.”

Other conditions included an agreement transferring the engineering, procurement and construction contract from the ZPC to HESCO; water permit and the environmental impact assessment certification for power plant and transmission infrastructure construction.

ZPC, a power generation unit of ZESA Holdings, was also supposed to mobilise cash for its own contribution to the project amounting to $330 million.