Zimbabwe was part of the agenda of talks President Cyril Ramaphosa had with European Union leaders. 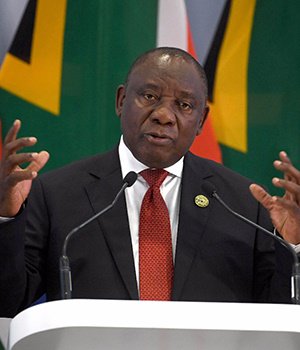 Zimbabwe was on the agenda in talks President Cyril Ramaphosa had with European Union (EU) leaders on Thursday.

During a media briefing, Ramaphosa said he discussed the importance of Zimbabwe and the lifting of any sanctions still in place against that country.

“Zimbabwe is on a path of great reforms. This needs to be supported, as Zimbabwe has turned a corner,” Ramaphosa said during the briefing.

He further noted that accelerating investment, focusing on climate change and women’s rights all formed part of global matters he discussed with his EU hosts.

“The EU is SA’s largest trading partner. Exploring opportunities for further investment and the investment climate, especially in SA, is of great importance,” said Ramaphosa.

“The EU agreed to strengthen cooperation in skills development in SA and in promoting entrepreneurship.”

Ramaphosa said the digital transformation of the SA economy in an inclusive manner was another area that needed to be supported.

As for the issue of land reform – on which Ramaphosa had been questioned before during his current visit to the EU – he merely mentioned that it was among the issues on the agenda with his EU hosts.

“We also focused on how we can best strengthen investor confidence in SA,” said Ramaphosa.

A further issue he said was important for SA and the EU to cooperate on was multilateralism.

“We should focus on the issue of multilateralism and make sure the unilateralism promoted by some countries does not lead to huge problems for many countries around the world,” he cautioned.

“The EU is a friend and ally willing to support us as we continue to enhance reforms we have embarked upon. We intend to grow our economy and address unemployment, inequality and poverty.”