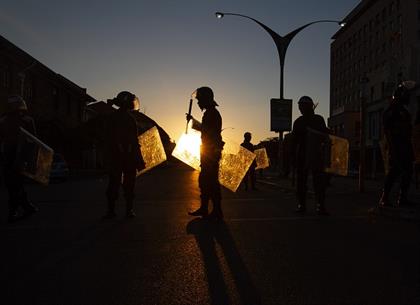 An African media watchdog charged Monday that Zimbabwean police had assaulted a journalist and forced him to delete pictures of them enforcing a Covid-19 lockdown.

Freelance journalist Panashe Makufa “was beaten up by members of the Zimbabwe Republic Police” in Harare’s Kuwadzana township “while undertaking his professional duties,” the Media Institute of Southern Africa (MISA) Zimbabwe office said.

Makufa told the media rights watchdog he was taking pictures Sunday of police as they dispersed people to enforce a stay-at-home order.

“Four police officers ordered Makufa to get into their truck where he was assaulted by two officers and forced to delete his pictures before he was dropped off,” MISA said in a statement.

Police spokesperson Paul Nyathi said they had received no formal report about the incident.

“We don’t condone the assault of people going about the legitimate work but we have had incidents of people who commit offences and then say they were arrested while performing their duties,” he told AFP.

“We are appealing to the journalist Makufa to come and make a formal report if indeed such an incident happened,” he said.

Makufa’s assault came after the arrest last week of two other journalists in separate incidents.

Police briefly detained freelance reporter Kudzanai Musengi in the central city of Gweru accusing him of working with an expired accreditation card, according to MISA.

In another case, the police arrested Voice of America (VOA) correspondent Nunurai Jena and charged him with disorderly conduct after he took pictures of police at a roadblock, the media watchdog said.

He appeared before a magistrate’s court and was released on bail.

Zimbabwe began a three-week total lockdown a week ago.

The southern African country says it has so far recorded nine Covid-19 cases, including one fatality.