Zimbabwe: SA and ANC are in a diplomatic jam

Growing pressure at the ballot box and economic fallout from the Covid-19 pandemic will force the ANC to deal more firmly with Zimbabwe – but it’s not clear that the rest of the region will come to the party.

Source: Zimbabwe: SA and ANC are in a diplomatic jam – Daily Maverick 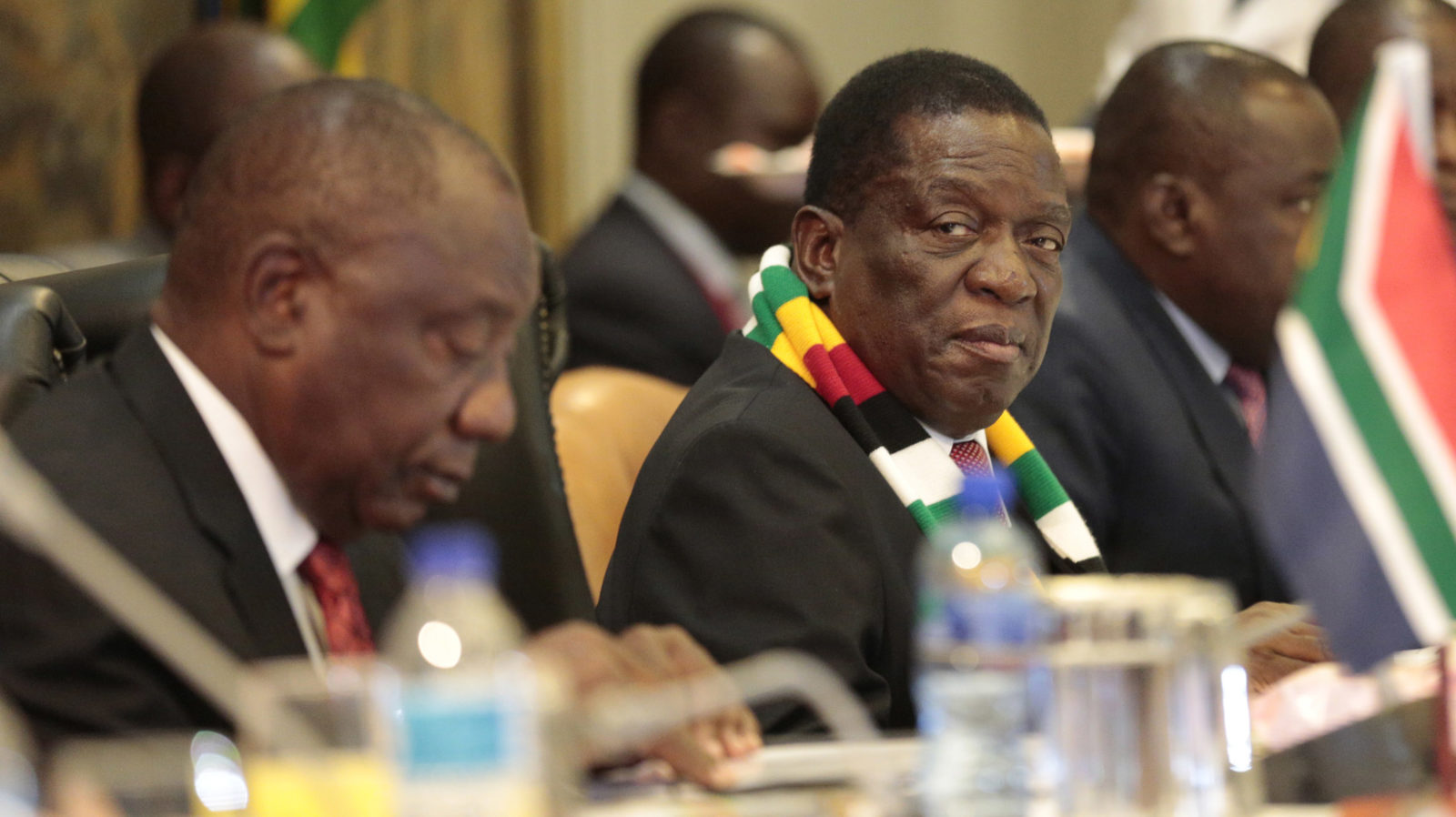 Less than a week after Zanu-PF scolded ANC secretary-general Ace Magashule for pointing to a crisis in Zimbabwe and saying “brutality, including police assaults” could not be condoned, the South African governing party’s party’s international relations chair, Lindiwe Zulu, repeated the assertions.

Other South African government leaders have been more circumspect. Announcing deployment of envoys to meet the Zimbabwean government “and relevant stakeholders” earlier this week, President Cyril Ramaphosa said the move was in response to “recent reports of difficulties that the Republic of Zimbabwe is experiencing”.

The envoys were former parliamentary Speaker and deputy president Baleka Mbete and former ministers Sydney Mufamadi and Ngoako Ramatlhodi — who also advises the President in Luthuli House and presumably went in his ANC capacity.

International Relations Minister Naledi Pandor told community station Radio 786 on Friday morning that the situation in Zimbabwe “impacts on South Africa” and engagement there aimed to “help resolve the problems there, in order to address our own situation and focus on the challenges of South Africa”.

Responding to a question on whether the envoys were barred by Zimbabwe’s government from meeting opposition parties and civil society, Pandor implied this was a result of Zimbabwe’s laws, though envoys would not be barred from such meetings in South Africa.

“We respect the sovereignty of Zimbabwe but it is very important that we continue to engage,” she said. “There is a reality. Go to our border post and see how many Zimbabweans wish to come into South Africa and mainly for economic reasons.”

She said it was in South Africa’s interests, given the economic situation, to continue talking to Harare.

“If they feel we cannot help, we will hear that from them. But my understanding was that discussions were cordial and that indeed the desire of the president that there will be meetings with individuals and organisations other than the government was communicated by the envoys.”

Internal pressure and a steady decline in electoral support could be spurring ANC leaders to take a tougher line on Zimbabwe.

On Tuesday, after the return of the envoys, Zulu said the ANC regarded Zanu-PF as a “sister party”, but told eNCA: “In the ANC’s view there is a political crisis in Zimbabwe and we have to be frank and honest about it, because we are asking ourselves the question: Where is the dignity in all the Zimbabweans who are here?”

Complicating matters for the South African government and the ANC is that supporters of former president Robert Mugabe known as the “G40 faction” – who call themselves exiles but are referred to as fugitives by the Zimbabwean government – are living in South Africa and have had meetings with Magashule in recent weeks.

The Zimbabwe government suspects these men helped organised the 31 July anti-government protests and the #ZimbabweanLivesMatter social media campaign. The pro-government Zimbabwe Herald reported that G40 wanted “bloodshed” and possibly the overthrow of President Emmerson Mnangagwa, who came to power in a coup d’etat in 2017.

The ANC is in a difficult position, according to one party insider. If it is too critical of Zimbabwe’s ruling party, Zanu-PF will come down on it “like a ton of bricks”. If it doesn’t appear attentive enough to the Zimbabwean opposition, the ton of bricks will descend from those parties, as well as from local activists and interested foreign governments.

The international community is said to be deferring increasingly to South Africa in dealing with Zanu-PF as foreign diplomats have limited access to the party’s leaders.

Apart from complaints by ANC supporters about the influx of Zimbabweans into the South African jobs market, there has also been pressure from the two largest local opposition parties.

EFF leader Julius Malema, known to be close to Kasukuwere, has called for the closure of the Zimbabwean embassy in Pretoria and participated in the #ZimbabweanLivesMatter social media campaign.

Formal engagement between the South African government and the Zimbabwean opposition is problematic.

A court has ruled that Movement for Democratic Change Alliance leader Nelson Chamisa was not rightfully elected to his position. Despite the MDC-Alliance having garnered about 34% of the vote in the 2018 election, Thokozani Khupe’s MDC-T breakaway faction, with less than 4% of the vote, is the only MDC faction formally recognised in the Harare parliament.

If South Africa took a principled stance on Zimbabwe, it might find itself in a difficult position. African Union Commission chairperson Moussa Faki Mahamat, in a statement, welcomed Ramaphosa’s envoy initiative in line with AU principles of deferring to regional influence, in this case the Southern African Development Commission (SADC).

However, pan-Africanist commentator Brian Tamuka Kogoro points out that Zimbabwe has a number of allies in the region and this dynamic could stymie any South African action — as it has in the past. In 1998 there was a spat between former president Nelson Mandela and Mugabe over intervention in the war in the Democratic Republic of Congo. Zimbabwe, Angola and Namibia preferred a military solution, while Mandela wanted a diplomatic approach. Mandela failed to get the necessary support for his position.

It should be up to the SADC Troika on Politics, Defence and Security to make recommendations on what to do, but this organ is currently chaired by Zimbabwe itself. It recently met on the situation in Mozambique, but failed to make any pronouncement on Zimbabwe.

Any attempt at the current SADC summit – with heads of state set to meet virtually on Monday – to sanction Zimbabwe is unlikely to find much backing.

Mozambique, currently experiencing its own crisis with an insurgency in the north, Lesotho, Eswatini, Zambia, Namibia, Angola and the DRC are likely to side with Zimbabwe, while Malawi’s president Lazarus Chikwera, as a newcomer, might be reluctant to speak out, Kagoro says. “If South Africa makes human rights noises, it will be on its own.”

Zimbabwe might argue for support on the basis of another protocol embraced by SADC.

“Under the SADC treaty, as read with the protocol on defence and security, the SADC is obligated to support a member state that is under threat from foreign hostile forces,” Kagoro notes. Zimbabwean government leaders have often used this defence in public, and targeted sanctions by the US and the EU haven’t helped.

The Covid-19 pandemic is exacerbating an already bad economic situation in Zimbabwe – with most of the economy dependant on a informal sector brought to a virtual standstill and more than seven million people with next to no food – and xenophobic tensions rising in South Africa, a lack of action is unlikely to be any sort of solution. DM